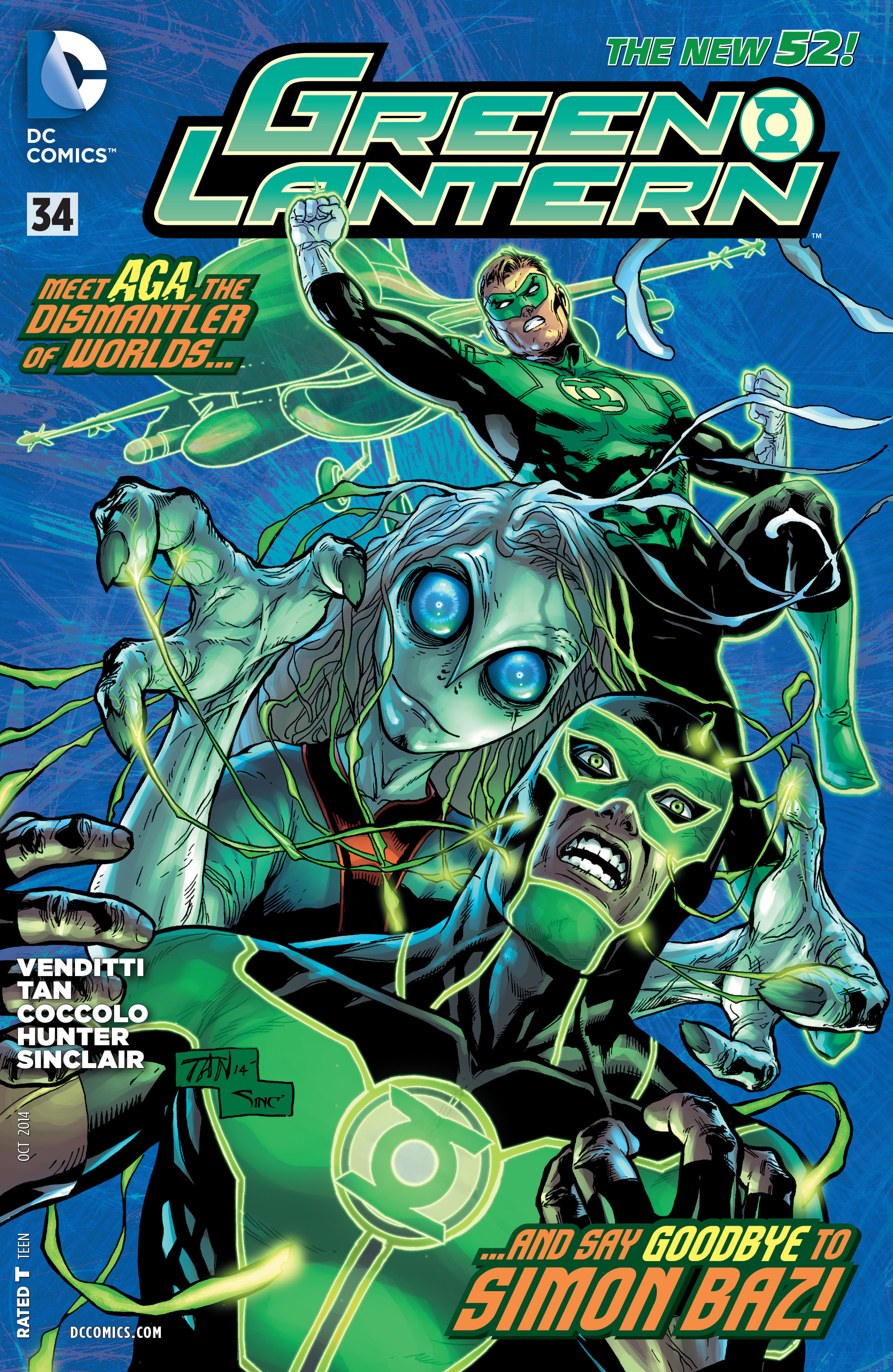 Despite the dramatic promises of the cover, there’s not much in the way of action this issue. Though the recaptured convict and empathic leech Agarushnawokliag causes some stir when brought to the sentient planet Mogo for imprisonment, the bulk of this issue is spent reflecting on the events of issues past. It’s a slow issue. But sometimes, that’s just what you need.

As I alluded to above, it’s nice to see narratives that know when to slow down and reflect for a little while. With the constant events and back-to-back cataclysmic plotlines, it’s far too common to squeeze a denouement into a handful of pages at the end of an arc before the next one begins. And with the changes and revelations that have been spanning the Green Lantern titles these past several months, it’s rather refreshing to just spend an issue wrapping up the final loose ends.

I also really enjoyed the focus on the rest of the cast. While Simon Baz doesn’t really get the focus the cover promises, seeing Hal’s family interacting with Kilowog, Saint Walker and, of course, Mogo, made for some great color, and I loved Hal’s talk with his brother. When it comes to processing such dramatic revelations as the consumptive nature of the Lantern Rings, I much prefer a good heartfelt conversation to pages of cramped internal monologue. Hal and Jim’s relationship is subtle and realistic, and Jim’s earthy words of wisdom about consumption, heroism and cosmic on-goings bring home the arc’s resolution perfectly.  Perhaps I’m just a sucker for civilian takes on the superheroic world, but I really feel that Jim and his family were just what we needed to- well – bring it all back to earth.

I found Hal’s handling of the issue’s nominal antagonist Agarushnawokliag somewhat off-putting. I know that the Corps has been, to put it lightly, busy, and Hal’s the type to go in a bit half-cocked, but bringing the guy whose entire ability is becoming stronger by feeding off of the emotional spectrum to the sentient planet well outside of the power suppressor cells and then dawdling and shooting the breeze with one of the few guards remaining is a pretty massive miscalculation. It’s not of huge importance to the issue, but it’s a bit of a sour note nonetheless.

Aside from the teaser on the last page, not a single thing of plot importance happens in this issue. And it’s really, really nice. If you’re just getting into this series, it may not be the best issue to reel you in, but with a nice wrap-up of the last big arc and a hook for the next, you could pick worse places to start. If you’ve been following the series already, you won’t be missing anything important if you skip this issue, but I’d buy it nonetheless. Big things are happening in the near future. It won’t hurt to stop, breathe, and enjoy a bit of Khundish ale with familiar faces.