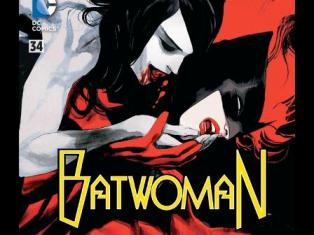 The anticipation of this issue of BATWOMAN was definitely felt with full force. The heart shattering story has now ended with a crushing sense of reality. Kate leaves Maggie and turns to her darker side, embracing the night under the false glamour of a vampiric gaze.

Nothing will prepare you for the sadness of this issue. It was not only emotionally damaging but tore the only “happy” relationship in the Bat family to pieces. Marc Andreyko has unfortunately tarnished the end of these lovers, having Kate cowardly pick up and leave her fiancé with nothing more than a note. Highly out of character, the sliding scale of Kate’s behaviour only becomes worse as she steps out of the strong bold BATWOMAN and into the shadow of what she really was. The sloppy story writing does nothing for the open ended scenario that is unfolding into the FUTURES END arc. It’s a highly disappointing finish to a beloved relationship that so many fans have followed since the reboot of the 52 and only leaves us asking more questions than we have answers too.

With more amateurish antics from the villains, the entire story is just a means to an end. They were rushed onto the scene with no real point or purpose, only to now have Kate shoved into the arms of another woman who is another D grade villain. Since the end of the annual, everything has been pushed out simply to culminate in this stunted ending, cheapening the once highly intellectual integrity of the series. None of the events since then have flowed, leaving both characters and the plot line lost to obscurity. The comic that had won awards for its debut is a far cry from the blaze of glory it had once been.

The artwork is still so beautiful with our female forms still intact. The flowing lines and bright colors with smooth contrasts fill each panel strongly.  Jeremy Haun really does know how to draw a strong woman without looking like a man all the time. I am also looking forward to return of a lost BATWOMAN character, but I won’t spoil that surprise, you will just have to wait till October to find out who “she” is.

BATWOMAN would have never allowed her mask to have been ripped off her face so carelessly. It was a cheap shot, a faltering mistake no member of the Bat family would commit. Their masks are their identity and it was an insult to her will and drive contradicting everything she stands for. Marc Andreyko’s lack of respect to the readers and their loyalty to the series is a clear indication of his neglect to the characters and the relationship they held. The relationship has been a target since the pervious writers left, and finally the arrow was fired to hit the mark. Eloquent writing that was both witty and uplifting has now become diluted drivel. Fizzling out to disordered chatter of disjointed conversations and jumps in time that make no sense. It is abrasive to the readers and gives no closure on the path that BATWOMAN is tumbling down.

If you love BATWOMAN and her relationship, DON’T read this issue. This is the end of a very long saga and will only leave a void that you won’t be able to fill. If you do chose the ending however, make sure you have plenty of tissues and a decent chocolate bar because you’re going to need it.