SINESTRO: FUTURE’S END  #1 by Cullen Bunn, art by Igor Lima, Ruy Jose on inks, and Jason Wright on color, presents a harrowing future quite different from the future Green Lantern records keeper Johns showed Sinestro as being in the way distant future. I guess such things can come to pass, but this…is certainly  different.

The SINESTRO book is a surprisingly steady and high quality book, one I think more people should check out. This is not quite as good as the current narrative, but it follows it rather well. Five years in the future Sinestro is captive, caught at Tartaros, an extreme penitentiary with robotic overlords. Apprehended by The Apex league as they tried to secure The Parallax Pit (Sinestro formally sealed Parallax within the planet Necropolis’ core) with a now yellow suit wearing Soranik part of the crew, they blew Sinestro’s ring finger off, incapacitating him.

Like the regular book this is full of intellectual rumination. Lyssa returns to Sinestro as a shade as he conspires his escape, a fellow inmate creating a fake finger for him to channel his Fear based powers. He does so, is able to break free. He is reunited with Lyssa, who turns out indeed to be a long dead shade, fufilling one last obligation. Sinestro returns to Necropolis and finds it desolate; everyone, including Soranik, dead and charred. Sinestro smashes Lyssa’s skull and a black lantern ring pops out, claims Sinestro and soon the entire corps is ressurected again as a new wave of Black Lanterns.

I enjoy the philosophical nature of this book, it’s a bit smarter than your average one but it’s not entirely that elevated that it’s not enjoyable. The art is good, nothing ground breaking but this book certainly has a weighty, consistent look. Even when fill-in artists jump on the art style stays relatively the same and is pretty consistent. This issue has some gorgeous panels of Lyssa, some a bit more sexy than they need to be but still very striking. Sinestro’s relationship with Lyssa has always been an interesting one. Coloring too is atmospheric. For what it is, it’s decent stuff. I don’t like the ending much.

I really don’t buy Soranik ever joining the Sinestro corps no matter who her dad is. DC is intentionally spouting ambiguous rhetoric if all these flash forwards are truly the future or not, with some looking like it could very well happen, with others much more unfortunate. They claim it’s the general direction of what they want the DCU to be, but that means a lot of awful stuff is going to happen. Black Canary’s head grafted onto Frankenstein’s chest? Some of it is way too off to stick. I can sort of see this being the future, but with Johns still in high power at DC, I can’t see anything that doesn’t ultimately fall in line with his vision of the future from happening. Is this his future? Really? I’m curious to know.

I liked it. It’s extra, like most of these, and a bit troubling, but it’s nowhere near as horrific as other Future’s End issues where everything is literally awful just to be awful. It could have been way worse and I’m glad they decided not to. Pick it up. This is a good shades of grey book. 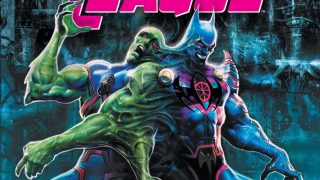