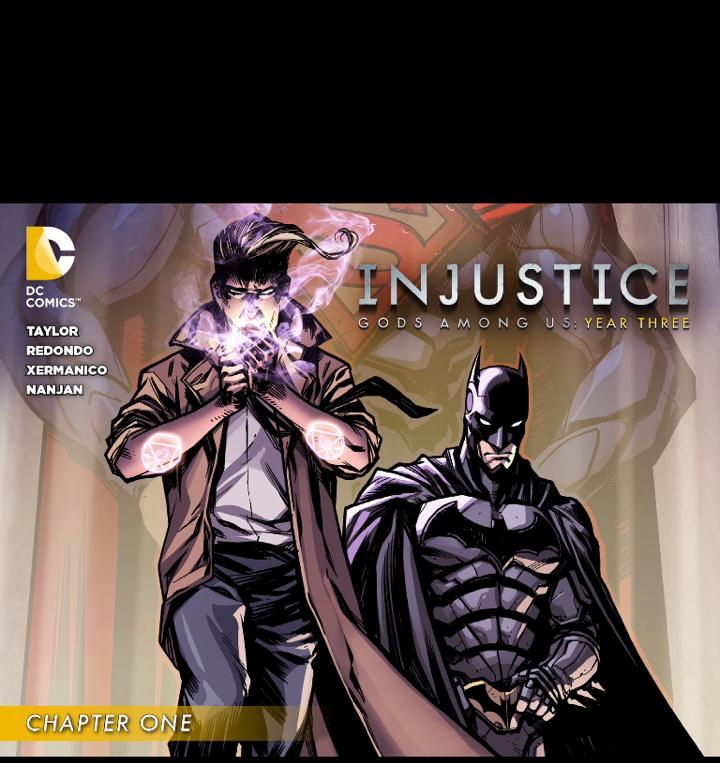 The adventure begins again in the next year of INJUSTICE with Year 3 beginning this week. Jumping ahead in time, we see a different group called into the conflict as the magic wielders are now summoned to aid against Superman’s force.

Starting the story again is not an easy task but Tom Taylor has taken on the challenge introducing yet another path for the story to take. I found it awesome that Taylor is presenting readers with so many DC characters; he is giving everyone with and without powers their own spotlight in INJUSTICE, cementing the point that everyone is important to the cause. The issue centers around the more magical characters of DC; Zatanna, Dr. Fate and Constantine are now taking their stand in the world’s battle. I was excited to see the three paired up as this team; I think they are going to have some interesting strengths and elements to offer. They aren’t just about kicks and punches all the time and they give the story that slight taste of fantasy reminding us of what Metas are really capable of.

Xermanico’s work boldly leaps off the page for another year in the Injustice universe. The bigger the better seemed to be the theme for this issue with huge panels and massive torso images dominating the pages. Both Bruno Redondo and J. Nanjan give the issue a stunning start to the new year, they both really go to town with the creation of these iconic characters. I loved the adaptation on Zatanna’s outfit, it still felt classic but gave her a more unique look for this Injustice universe. With the bright pages colored in magical hues of purples and yellows, it definitely had the feel of something supernatural to the characters story.

The artwork has been highly praised throughout the series and nothing changes coming into Year 3. The beauty of the character details and features are a stunning reminder as to why these artists are working for DC. I loved the glisten on Dr. Fate’s outfit, that shimmering color of gold really made the metal stand out and set the outfit into a more regal state for his character.  I also thought the change of direction for the story was interesting. I was expecting to start off with Batman and his team but instead we see Batman’s ace up the sleeve. The team are a powerful force and I have no doubt they will be highly unexpected now joining the fight.

As much as I loved the large panels I found the giant graphics didn’t leave much to the story. I wanted a bit more explanation as to what was now going on and what had happened. Also Constantine’s daughter was a random addition though I assume Tom Taylor has plans for her later. She just seemed to show up and not really have much of a purpose besides giving the readers a view of Constantine’s soft side.

With the new year beginning, the battle in INJUSTICE continues. No one is safe from Superman’s control of the world and it’s now time for the once neutral characters to pick a side even if they don’t want to. Stay tuned as the story of Earth’s fate unfolds in Year 3.