Review- AQUAMAN AND THE OTHERS #7 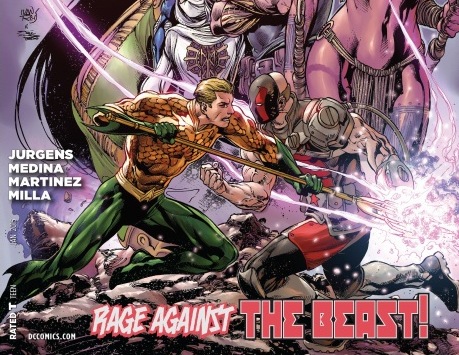 With characters off in different directions, this week’s Aquaman and The Others is like two stories in one, with the threat of KGBeast and his accomplice Cheshire against poor Prisoner-of-War’s troubled past highlighting the issue.

This issue was confusing as well due to its jumpy story flow. Dan Jurgens has almost written two separate stories in the one issue with the team now split. I would have loved to have seen Ya’Wara take on Cheshire for the fight scene but sadly no cat fight was on offered.  It also bothered me that Aquaman who is supposed to be the leader of the team, was only seen for a few pages. It was as if he was added for a two seconds worth of stardom and that was all. Though for the few dashing moments I was happy to see he was still united with his Queen. I have a real fondness for the pairing and was glad to see that Aquaman’s past with The Others was not impacting that.

Lan Medina has taken on the giant project and I applauded his amazing talent to draw so many different characters. It is not an easy job, having to work on all the different team members but he definitely gives them all unique traits. I really loved Cheshire, both her costume and makeup really made her stand out in the issue as she became more of the centre focus villain to me. Matt Milla’s colours were wonderful also, they were bright and bold giving the issue more cartoon effect but still keeping the characters in a realistic nature. I think the added bonus of having so many characters in the story is that Milla could really open up and use all of his color plate.

The artwork was fantastic, I really loved the huge splash pages details. As much as the issue had a lot of these pages, the immense expression and movement in each panel was stunning.  Cheshire stole the show for me and the villain team looks really interesting. It was a surprise to see her team up with KGBeast but none the less she’s still as sassy as ever and I’m glad to see they kept her that way.

My biggest negative was the text. Way too much crammed into panels then a giant splash page. With that risk with having so many characters talking, the text can clog up the comic panels sometimes and detracts from the artwork. The villain’s base on the moon was another random element, I have heard too many funny places for hideouts but the moon seemed really clichéd to me.  Another issue was the second story with Prisoner of War. I found it very jumbled and was staggered between the other events so I didn’t get the full impact of what was going on with it.

Aquaman and The Others now have to deal with a rival villains team who seem to have their own agendas but will the ladies manage to gain control of their friend in time to help? Stay tuned to see if the group will reunite and what they plan to do about the reneged villains.