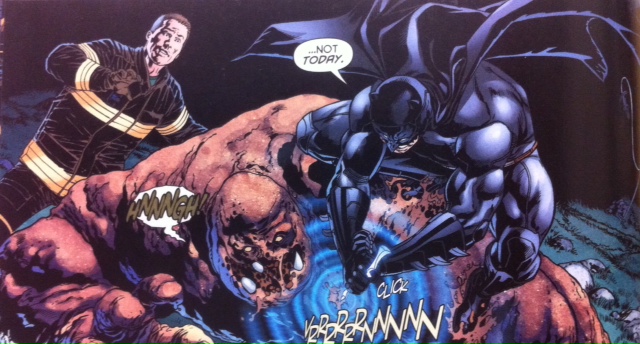 Alfred Pennyworth- bad ass. Yep, that’s right, Alfred Pennyworth is a bad ass. At least that’s one of the best things about this issue of Batman Eternal. The destruction of Arkham Asylum as detailed last issue pushes this month’s story forward at a quick and enjoyable pace. There’s no let down to the story as the developments are just as exciting and remarkable as last issue’s though not nearly as noisy.

Alfred comes to consciousness trapped under debris and hallucinating only to be rescued by a brief and unlikely ally- Bane. Bane has rightly identified Alfred as an asset in his attempt to escape the ruins of Arkham. Meanwhile, Batman is left to put down the inmates who are attacking the rescue squad. Mr. Freeze, Zsasz and Clayface all draw the attention of the Bat. Harvey Bullock stubbornly turns the Police that have responded against Batman. Simply put, Batman gets away as is expected, but not without the standard Bat-awesomeness we’ve come to expect from the Dark Knight.

A brief interlude brings Stephanie Brown face-to-face with Hush, whom Julia is trying to locate via the resources in the Batcave. Just as Batman makes his get away, Julia is able to locate Hush just before he puts a bullet in Stephanie. Go Batman, go! Alfred after a hand-to-hand combat situation has proven his worth to Bane takes the lead and is apparently, oh…where are you going Alfred, trying to escape, no, oh, what’s that’s you’re doing. Goodnight, Bane. Alfred disables Bane and enters a secret door to Bat Hide-away NB-13 and gets the subterranean coms online. Yeah, Alfred, you’re a bad ass.

There’s not much about this issue that isn’t a positive. The pace is quick and this aspect of the story is really rolling. Alfred’s contribution is particularly good. Seeing Alfred in action would’ve been enough, but the fact that it was leading somewhere unexpected was even better. Though brief, the interaction between Hush and Steph moved Steph’s story forward and set up what should be another meeting between Batman and Hush next issue.

I guess I want to like Harvey Bullock, but he’s so hard-headed that he can’t even admit that Batman is helping and would cut off his own nose to take him down. In this situation it seems a little over-the-top that Harvey would turn the GCPD on Bats immediately after he’s taken down, Freeze, Clayface and Zsasz.

This was a really fun, fast paced issue with great Alfred action. This is an issue that can easily be read alone or in the context of the overall story. This is a good issue to pick up if you’ve been wondering about this title. It won’t be hard to figure out what’s going on. It’s easy to feel the momentum building with this issue. C’mon Wednesday… 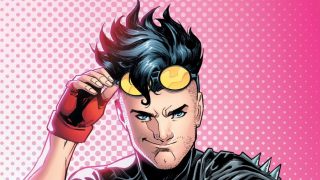