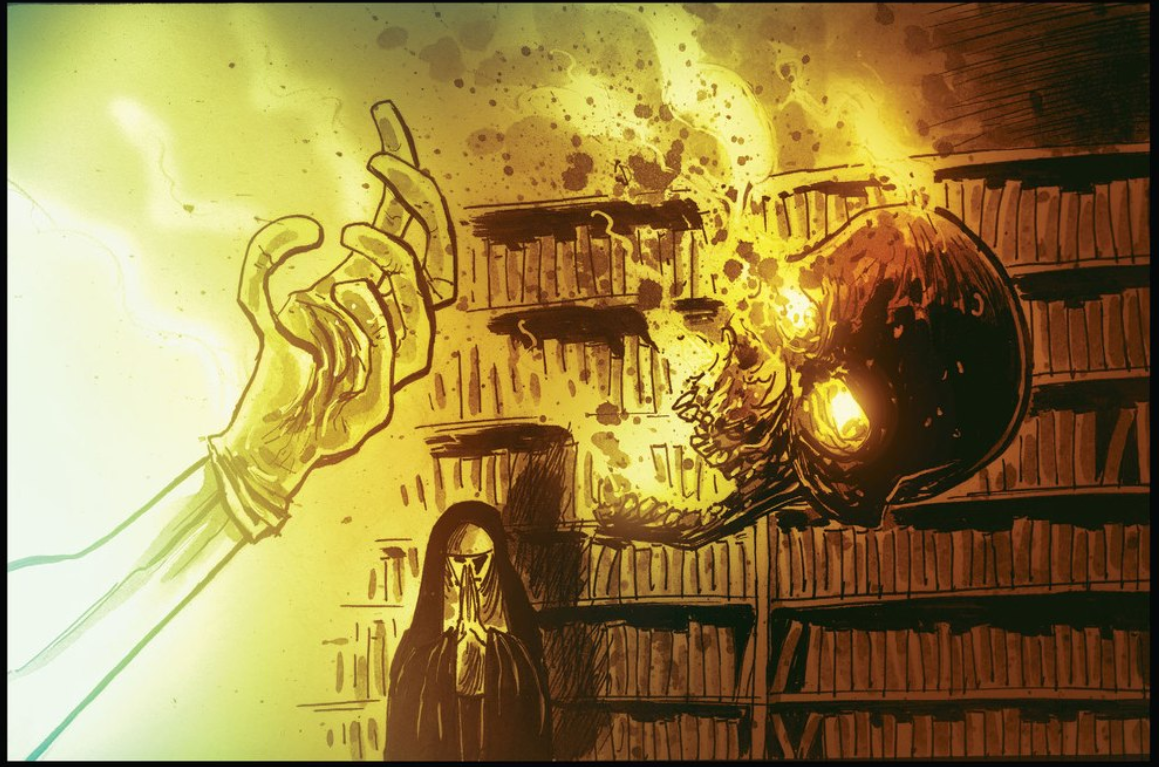 After a solid debut, Gotham by Midnight #2 ups the stakes and the horror. Picking up where the first issue left off, Precinct 13’s Jim Corrigan attempts to defend Sergeant Rook and a schoolroom of children from a ghastly nun. This harrowing battle is juxtaposed with the reveal of Sister Justine’s past, which is just as disturbing.

After witnessing a pair of altar boys perform a supernatural ritual, Sister Justine is confronted by her superiors. It quickly becomes clear to Sister Justine that she is not in the company of friends and is attacked when the demonic nature of the priest and Sister Clara is revealed. Cutting back to the present, we see Rook escorting the children to safety, when one of them questions in a supernatural tongue, “Edrid Akka?” Meanwhile, Corrigan faces off against the ghost, who is also rattling off various words.

The two stories ultimately connect: Sister Justine is ultimately saved by Jim Corrigan’s powers, while in the present Corrigan uses an inventive means to defeat Sister Clara before meeting up with Sgt. Rook and the Gotham Heights children. As the team regroups in Precinct 13, Sister Justine reveals that the words the children and the demon weren’t words. They were names. And so Corrigan and his team begin their case, and the final page reveals just what they’re up against.

Gotham by Midnight #2 continues to build on the debut’s strong start. The only real negative to Gotham by Midnight #1 was the fact that Corrigan and Rook felt like the only characters with multiple dimensions. Ray Fawkes deftly does away with that concern, maintaining the premiere’s intimate focus, while slowly revealing bits of Sister Justine’s past. The way Corrigan rids himself of the ghost serves as a clever surprise.

Ben Templesmith’s art on Gotham by Midnight #2 is superb. The washes he uses service the atmosphere and tone of the book. The light sources are always muddled, like a candle in fog, and it gives the book a look unlike any other. Templesmith’s line work helps to tell the story, as he chooses to emphasize and deemphasize details in certain scenes, giving an ethereal look to many of the characters.

Gotham by Midnight #2 is a comic with no easily discernible weaknesses. Yes it would be nice if readers knew more about the members of Gotham’s Precinct 13, but this issue demonstrates that Fawkes is planning to reveal the details of their past as needed. Some will not like the murkiness of Templesmith’s art, but it contributes wonderfully to the story and the book would feel incomplete without it.

With a great atmosphere, combining eeriness with true horror, Gotham by Midnight #2 is a thrilling read. The characters are beginning to find their footing and with two issues complete, Gotham by Midnight is looking to become one of the stronger books in DC’s lineup.