The end is just a new beginning as Year 3 of Injustice finally comes to its conclusion. With both sides narrowly missing the fires of Hell, they manage to do the right thing putting aside conflict to save the world from destruction.

Brain Buccellato concludes the end of Year 3’s story in this issue. As much as he has left us with a bit of an open door, the issue at least summed up the events around Constantine and his involvement in this year’s arc. I loved the witty comments from most of the characters in the issue, Damian has so much cheek and Constantine is just his usual foul mouthed British self. I also really felt for Billy in his role. Buccellato placed such a heavy perspective on the young character. It was really interesting to have the youngest member in Superman’s team ultimately having to carry, not only, the lives of his team mates on his shoulders but the fate of everyone in the world.

I struggle to explain in words just how perfectly stunning the panels of this week’s issue are. Bruno Redondo has completely out done himself in the artwork and with each year we push into, the pages just become spectacular compilations of artwork. Juan Albarran and Rex Lokus only push this artistic grandeur further with complimenting colors and finishes that grip each page. I found myself lingering on panels, especially with Wonder Woman, Raven and Batman, as each character has so much detail and emotional reaction I had to soak it all in for that extra moment before moving on with the story.

All in all it was a wonderful end to a rather chaotic Year 3. With all the action and drama that had happened, the deaths and secret plot revealed, not to mention having Wonder woman reunited with her team, the whole issue did the story justice delivering its emotional end. Though the real highlight for this issue is the artwork. What can I say I’m a Bat fan through and through. I adore the construction of their outfits for Injustice and when Batman takes his cowl off I actually thought it made him look even cooler than he is. The whole way that they are constructed is incredible and Redondo just gives DC’s character a beauty that fits this series. If you have loved this series so far this issue is not going to disappoint!

The biggest negative I always have is the character inconsistencies, a few more seemed to dip out of the issue but it’s no big deal for this issue. We as the readers assume they are safe and sound until told otherwise. My other negative is Constantine’s plot. It seems to make no sense to the safety of his daughter and created just random chaos for the sake of it. Superman lived in the end so the whole plot slightly backfired then Constantine just walks away or should I say, fades away in purple. Very strange indeed.

Injustice year 3 has now ended and year 4 looms around the corner. What new surprises or tragedies will befall the teams? Will it be another year of full scale war or are we to find the teams finally finding a common ground? Stay tuned as we now read into a new year and a new world of chaos. 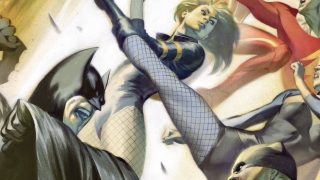