Review- INJUSTICE GODS AMONG US: YEAR 4 #5 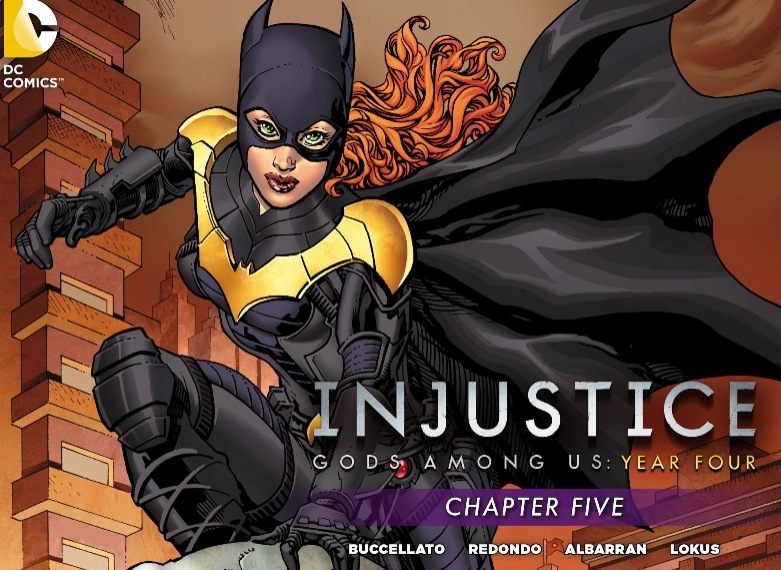 Injustice moves on from another death as Batman tries to rally forces again to his fight. But with everyone stepping away from the conflict an unlikely appearance from an old friend might be to turn the tables on Superman’s plan.

Brian Buccellato has rushed another issue this week. As the return of Oracle steals the spotlight I felt that her procedure and enviable transformation back into Batgirl was a convenient rush job. Just because Batman can’t get anyone to play in his sand box anymore, she has to do something potentially dangerous to help him out. With the recent death of Renee, I feel like all the characters left are honestly setting themselves up to die and I don’t blame Aquaman for basically telling Batman to go fight his own war. Squeezing so much into one story had the issue jumping up and down from Renee’s grave to Oracles transformation, Harleys teasing entertainment and Superman’s warning, the issue wasn’t as fluid as it usually is.  I think the story needs to take a step back and really focus in on the field and who is going to play what part from now on.

Bruno Redondo, Juan Albarran and Rex Lokus bring back the colors and the extremely beautiful woman to Injustice. I can’t stop looking at the amazing costumes that these three create not to mention the flowing hair and the powerful suits upon the characters. Nothing is cooler than tough heroes doing it right! I love the shaded panels and the explosion of texture that’s also brought to the pages as hues bounce and complement each other the way that good artwork should.

God this artist can draw! I love the artwork so much from each character as I found every panel with Barraba in it incredible. They out did themselves with her expressions and emotions and I felt myself feeling squeamish looking at her body in the injection machine. I commend them on a excellent job and even in civilian clothes all the characters look stunning.  And Harley, dear god that woman is a show on her own. She brings the humor back to the grave situations so well and even her small injections into the series have been a pleasure to read every time.

Ok so I still have issues with Batwoman and Renee suddenly not being together, did I miss their breakup or something, because last time I checked she was a beloved WIFE not a friend! I know that it was very much a heavy addition to their characters when Taylor was writing the series but it seems to have gone by the wayside now and honestly really devalued, not only the characters, but Renee’s death scene as well. Another sticking point for me was the few pages of Superman’s team jammed into the back of this issue. It was a bad cut of story and really this should have started the next issue not just been tacked on again. it’s not a great hook and I would have prefer a solid end with Batman’s team than that confusing bunch of pages.

With a war that has tainted both sides, Injustice has brought its own version of backup to the party. The Greek Gods now step onto the playing field to teach both sides a lesson but will it be enough to stop the 4 year war?