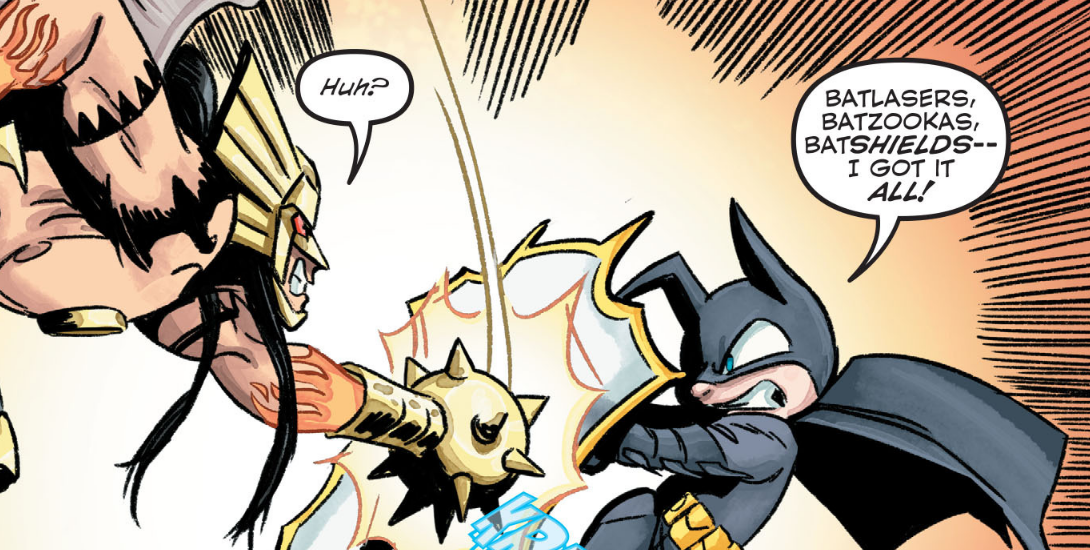 We continue down the rabbit hole in Bat-Mite #2 by Dan Jurgens, Corin Howell on art, Mike Atiyeh on color and Tom Napolitano on letters

ut Hawkman (out of all heroes) about to body swapped with an evil mad scientist lady. He reality warps Hawkman into various versions from over the years and settles on one, but the villain sees his powers as too much a rival of her own body swapping abilities that have kept her alive over 200 years so she has Bat-Mite knocked out and thrown of a cliff. Lucky he survives and with a “Bat-Mite Returns” he comes back to finish the job, but “Doc” has already swapped bodies with Hawkman. They spar and Bat-Mite gets the upper hand, knocking Hawk-Doc out again. He forces the evil assistant to reverse the process and more or less slips away letting Hawkman himself free all the other prisoners once he comes to. He reveals himself to two young people who were held captive who were debating if the “kid in the Batman suit” was real or not and more or less convinces them to let him stay with them.

im Drake, former 90’s darling and franchise saver). It’s retro Warner Bros 90s cartoon shlock and even the art echoes that simpler (when not being X-Treme) time especially with the villain’s design. I really enjoy this feeling of this mini so far and while it’s definitely dated it’s dated in a good way rather than teenagers in perpetual early 2000’s fashion or Liefield art. Even the coloring is actually quite nice when Bat-Mite was thrown into the water there was a slight art shift.

Few. Art is cute but it’s not going to change the world. At least it’s obviously not trying to be something its not or try to present itself as baseline good. The. Writing is the same way.

Cute and well, refreshing mini worth looking at if you’re a fan of non sequitur and screwball antics.  I can’t say it’s for kids because the jokes are way too aware and self-referential. It’s not earth shattering but it will do. Next issue features I’m going to presume Damian so I’m quite excited for that one.