Keeping Up with The Flash at SDCC (Part 2) 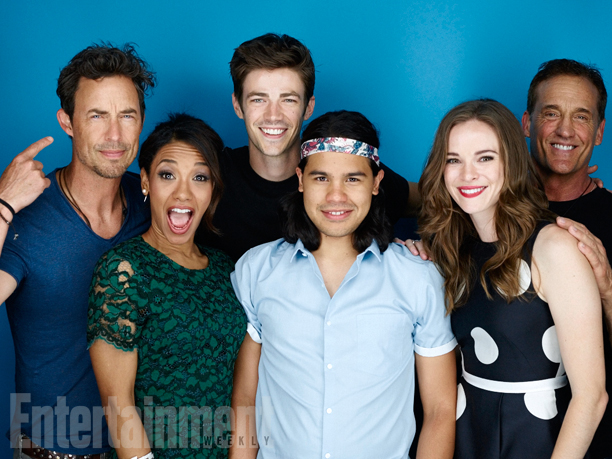 Word travels fast at San Diego Comic-Con, and the news is wildly circling around one of the upcoming fall season’s most anticipated returning series. When CSI investigator Barry Allen, as played by Grant Gustin was introduced on The CW hit show Arrow, fans held their breath — certainly show creators Greg Berlanti and Andrew Kreisberg were anxiously gauging their audience’s response. The minute that Barry got struck by lightning, fans were synched and The Flash debuted to much critical acclaim.

Now entering into its second season, the cast has returned to Comic-Con. Last year the pilot was introduced to a packed house, Hall H was filled to capacity, and Gustin along with his co-stars became overnight sensations. This year, The Flash team is already setting off several online alarms, and they’ve only just begun on their extensive Comic-Con press day. By lunch, Andrew Kreisberg is flustered at having to fend off rumors that one of Season 2’s most coveted secrets has just gotten out.

When The Flash returns in the fall, he’ll be joined by another super-speedster — when the legendary Jay Garrick, the original Earth-2 Flash, gets introduced into the mythology. Kreisberg and the crew think fast on their feet! Gustin, along with his cast mates Danielle Panabaker, Candice Patton, Carlos Valdes, John Wesley Shipp and Tom Cavanagh are about to enter the second-half of their day visiting media, and Kreisberg is off to join the cast of his other new DC Entertainment series Supergirl.

So it’s decided: If the topic of Jay Garrick presents itself, the cast will do their best to deflect an answer, but in the world of The Flash —especially after the time-altering, cataclysmic singularity unleashed in the finale — anything is possible. Ready to go into action, the cast confidently armed with their story (and sticking to it) face a crowd of fans camping outside of one hotel, and enter their shuttle van, moving them over into a San Diego downtown location for more press appearances and photo-ops.

Once they’ve arrived at their new destination, circumventing the massive gathering of convention attendees hoping to get an autograph or picture, the cast is ushered into the building like rock stars. Their first stop is an on-camera interview for Entertainment Tonight followed immediately by another few bytes for The Insider. Grant and the rest of the crew move effortlessly into their positions and answer a barrage of rapid fire questions aimed at them — all about Season 2.

Who will live? Who will die? Does Barry end up getting together with Iris? Will Henry Allen get out of prison? What’s up with Caitlin and Cisco’s superpowers? What is going to happen to Harrison Wells?

They are ask the same questions, almost every time, but show no level of duress or skip a beat. Eagerly answering them as fresh as they are asked frequently. It’s a testament to the team that they are able to come up with colorfully different responses every time, and joyfully banter between each other with great admiration. If fans have any doubts about how this cast keeps it together, it’s because they all genuinely like and admire one another.

As the day goes on — a string of beautifully captured gallery shots are taken by Getty Images, as they group is separated for on-air interviews with IGN Lifestream — Candice Patton notices the energy beginning to wain, and immediately checks in on her cast mate John Wesley Shipp. By the time the group gets to the Entertainment Weekly suite, narrowly missing the cast of Batman v. Superman (with the exception of Amy “Lois Lane” Adams) the photographer gets one of the best sets of pics yet!

A group shot of the cast in “motion”, another of them up-close and tight, and finally a “family shot” pairing Gustin and Shipp with their leading lady Patton. It’s a shot that fans will anxiously comb the internet for and wait to collect, capturing the “Allen Family” in all their glory. The clicks of the cameras soon stop and the switch of the misc come on, as the group settle in for radio interviews, and a final session in another suite for a chat with TVLINE.

Their next stop is perhaps for all of them, their most favorite! Once again ushered quickly into their shuttle the cast is hustled back into the convention center to take their turn at the WB Booth to meet-and-greet with fans on the sellers floor and sign autographs. It’s a wild 45 minutes, and someone is expecting their hands to cramp, but not one fan is disappointed. One eager youngster even poses with his hero The Flash himself, as Grant scoops the little one for a personal shot.

Just before it’s time to move to the last stop, Patton can’t help herself! The self-confessed Comic-Con Fan dashes to get a shot with the Man of Steel himself, or rather a statue of actor Henry Cavill in the super suit that is frightening lifelike. Really…who can blame her. Moving out of the convention center and back into their vehicle, The Flash crew is driven over to stop at the docks to board one of the con’s most coveted media stops…the TV Guide Yacht. After a round of interviews and photos the day is done!

Mission accomplished! The Flash cast has single-handedly inspired faith that come Season 2 of The CW series, the show will only continue to keep pace with the momentum it’s already set continuing to commit to one of TV’s most exciting comic-book inspired hours of television!