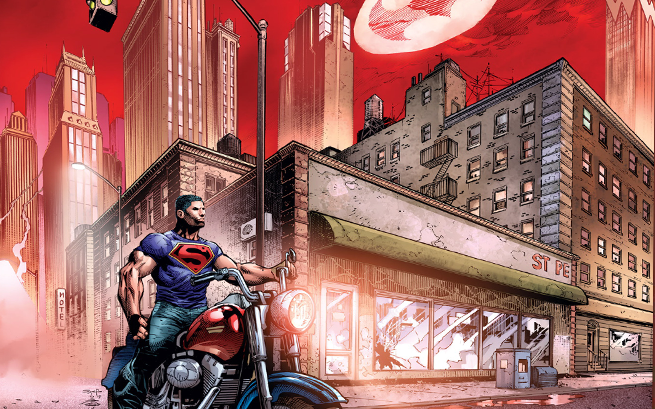 At DCN we love comics as much as you do. It is time for Flashback Friday, in which we will revisit classic story arcs and plot devices used many times during the course of the DC Comics universe throughout all the media. This time we give the spotlight to Superman, the ‘Man of Steel’ going powerless. Kal-El has experienced his fair share of instances in which he loses his native Kryptonian superhuman abilities, many times as a lesson of humility, others as punishment by his adversaries. So take a sit and let’s talk about some of the most iconic moments in which Clark Kent has become just…well..Clark Kent.

We start with Superman powerless due to a red sun and tied to a pole with a mob filled with bigotry against witches? Spotlighted by BlogIntoMystery, Superman #184 features Superman travelling to a rogue planet named ”Zhonda”, that unknown to him is under a red sun. How the planet travelled from one solar system into the next in mere hours, remains a mystery. How could Superman not see he was not in his solar system anymore? Still a mystery. So much for ‘Superhuman Vision’.

The planet’s inhabitants try to kill a powerless Superman, as he is weakened by a radioactive substance they are immune to, due to the red sun. Superman demonstrates his martial arts skills, surpassing those of late Bruce Lee and Batman combined. Superman manages to escape the planet when the latter travels under another yellow sun.

We continue with Smallville, the hit tv adaptation of a young Clark Kent and his adventures before he became Superman. Let me make this clear, during the course of Smallville, Clark looses his powers a total of 22 times…..22. With Season 10 being the season with most episodes using this plot point. The series uses this plot device in many ways, sometimes moving the series to a new creative direction and sometimes not paying off for the overall arc of a determined season. Let’s take a look at some of the most memorable instances in which Kal-El goes powerless.

Clark disobeys Jor-El, who strips him of his kryptonian powers causing Clark to be mortal which gives the season the opportunity to truly explore Clark’s human side for three episodes which moves the series into an interesting direction.

Other episodes in which Clark looses his powers include but are not limited to:

I dare you to NOT read Kal-El in Terrence Stamp’s voice.

The Justice League animated series also had a powerless ‘Man of Steel’. In the two-parter, ‘Hereafter’, Superman is pushed into the far future. He wakes up on Earth, a barren wasteland, now under a red sun which renders him powerless. He finds company with the only other being alive who could equal his ability to survive, Vandal Savage. The two become allies as Savage claims that after so many years he is now reformed, stating that after a millennia of loneliness and isolation, he’s come to realize that his obsession with power was meaningless. A power-stripped Superman sets aside his differences, and actually gets help from Vandal Savage to return to his time and stop a younger version of Savage himself from destroying civilization.

Superman: Up, Up, and Away!

A pre-‘Flashpoint’ story arc that focuses on Superman, who lost his powers after a fight with Superboy-Prime during Infinite Crisis. The arc follows Clark Kent as a journalist, using his skills as such, protecting Metropolis from a disgraced Lex Luthor. This arc is a favorite as we see more of Superman’s human side, demonstrating he doesn’t just know how to punch his way to victory, but that he, has that journalistic detective-esque kind of instinct that allows him to battle villains with the power of his keen intellect and the help of a pen.

“The pen is mightier than the sword”

The arc was short-lived. I found myself wanting more of this powerless Superman and how other Justice Leaguers would react to a human ‘Man of Steel’ as part of the team.

STARRING HEROES FROM THE PRE-FLASHPOINT DCU! A powerless Superman is called upon to protect Gotham City…and his pregnant wife Lois Lane!

Recently the Superman from the pre-‘Flashpoint’ DC Universe, while visiting Gotham with his wife, Lois Lane, got trapped inside a dome, which we later learned was the work of Telos. The city was transported to a planet, outside the multiverse, a planet which was Telos himself. As result of the effects of the dome, Superman lost his powers. This gave him the opportunity to have a normal life with Lois, who soon became pregnant. However Clark’s happiness was short-lived as after one year, the dome came down and Telos forced him to fight the champions of the other cities he captured inside domes as well.

The arc was very short, only spanning over two issues, but proved useful to the overall design of the new DC Universe after Convergence, as an all-new series starring this version of Superman (albeit now powered) will be released soon.

Comics legend John Romita Jr. (The Amazing Spider-Man) makes his DC Comics debut, teaming up with superstar writer Geoff Johns (JUSTICE LEAGUE) and inker Klaus Janson (BATMAN: THE DARK KNIGHT RETURNS) in SUPERMAN: THE MEN OF TOMORROW! The powerful super-being Ulysses is the last son of a doomed planet. Our planet. Thinking Earth’s destruction was at hand, his parents used experimental science to send their son to another dimension. Now he has returned, and Superman has finally found a peer. But will Ulysses become the hero and partner that Superman wants him to be?

First off , Romita Jr. and Geoff Johns bring ‘Men of Tomorrow’, where Superman faces an equal or even greater being, Ulysses. Ulysses proves he is powerful enough to take down Superman, more than once. Ulysses brings a great opportunity, story wise, for Superman to explore his decisions. Would he sacrifice Earth and it’s people for a chance to save Krypton or bring it back from oblivion? I bring the question to the table as Ulysses is prepared to sacrifice Earth to save his home dimension, and asks for Superman’s aid to do so. Putting Superman between the wall and the sword.

However Ulysses does not only contribute with that to the story, but his presence and powers actually affect Superman’s own, causing fluctuations to Sups’ solar energy. This is a catalyst that helps Superman discovering an all-new power, the ‘Solar Flare’ or ‘Super Flare’. However the power comes with a cost: Superman loses his other Kryptonian powers for a time, sometimes hours, sometimes days depending on how much solar energy is released at once. This after effects turn Superman a human for a while giving chance for a wide range of storylines like Superman: Truth.

‘Superman: Truth’ is a post-‘Convergence’ story arc, crossing over multiple DC comic books like Superman, Action Comics and Batman/Superman. The arc explores Superman’s humanity as he deals with his vulnerability while continuing fighting the good fight after Lois Lane and the Daily Planet expose to the world his real identity as Clark Kent. This arc features in less words, a more grounded Superman. The arc is not yet concluded so expect more surprises with this storyline.

That’s it for this week fellow DC fans.

Is there a moment, story arc, plot device or storyline you would like us to revisit? Is there another story where Superman loses his powers that you would like to share? Sound off in the comments section below.