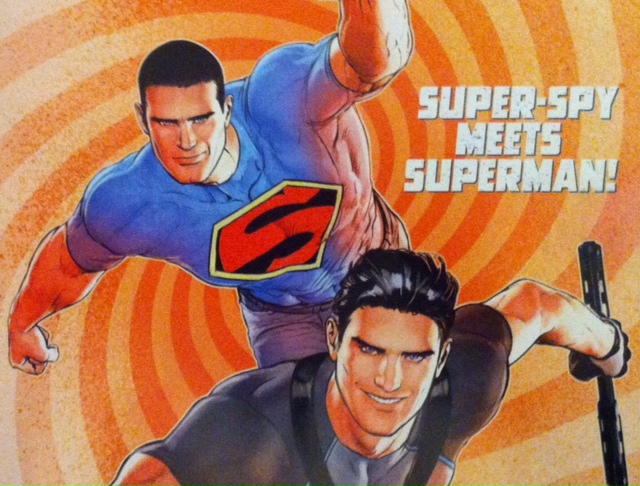 Our tales begins a few years ago as Superman, Batman & Robin, yes Dick Grayson as Robin, team up to take down Blockbuster. It’s a quick flashback that sets up what will become a Superman & Grayson team up to take down Blockbuster and some Fist of Cain followers. Dick is preparing to say goodbye to Gotham right where we left off in issue #12 of Grayson. As he leaps from the building he is on he is intercepted by the well meaning Superman offering reasons for not taking one’s own life. Clearly, Superman’s vision is down to normal levels, maybe he even needs those glasses! As shocked as Dick is at being caught in mid air, Superman is even more surprised when his catch calls him “Clark,” and has the Sypral induced Hypno no-face. So, he drops him. Grayson being no slouch at falling, manages to land safely and the two have a heart-warming catch up.

Shortly, a group from the Fist of Cain appears on the scene looking to kill Superman for ‘points.’ Dick quickly explains that the members get points for whomever they kill. An alien like Superman is worth 3, and Dick as a member of Spyral is worth triple revenge points. Some of the Fist of Cain are jucing up for chemically induced super-powers and they give Dick and Clark a decent time of it, but when one known as Dirty Girl brings out her pet Blockbuster, they know they are going to need some help.

After making it to one of Batman’s abandoned safe houses Dick recalls the mechanism that helped them in the issue opening flashback. Unfortunately, neither of them can build it in time so, Supes puts in a call to Lex Luthor for an assist. Despite the fact that he helps with the last minute save, he has a classic paranoid, xenophobic, megalomaniac moment that is classic Lex.

The fits seamlessly within the current continuity of both the Superman and Bat-books. The rapport between Dick and Clark is dead on. Their interaction is fun and witty, recalling the more light-hearted era of comics. For many years the “World’s Finest Team” was Superman and Batman, and during that classic era, Batman really meant Batman AND Robin. What results in this issue at the calm before the final storm moment is some really nice character work in which we see how Superman and Robin make ideal partners for Batman because they are balances. They both compliment Batman and Batman them. The moments when they reminisce about ‘annoying’ Batman due to lack of planning and thought are enjoyable and funny. The character work throughout the issue is excellent as always. Dick, Clark and Lex all get there moments. Clark is especially interesting in his struggle to work without his array of powers. Dick reassuring him was an interesting role reversal.

There are a couple of points where the book is a bit wordy and spends time catching readers up on the current status quo in Dick and Clark’s lives that may slow it down for some readers. Blockbuster’s return was contrived, but it served it’s purpose in allowing Clark and Dick to have their bonding moments.

Grayson Annual #12 is a great one and done issue that fits nicely in with the regular title while giving the reader a treat. The character moments are strong as usual while also providing insight into these characters changes and growth.