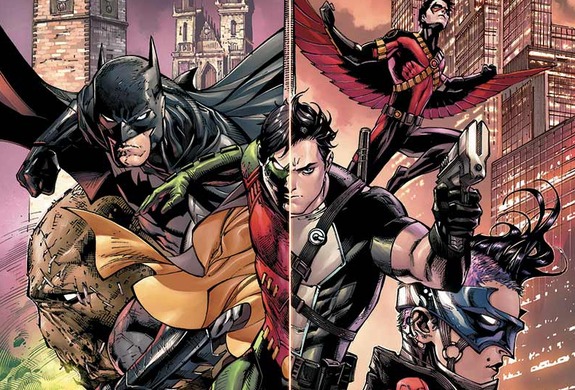 Ever since he was forced to fake his own death Dick Grayson the once (and always) Nightwing (but one-time original Robin — try to keep up with me here) has had his hands full as one of the world’s super-secret (and most unabashedly handsome) agents. More specifically an agent working for the subversive, international intelligence conglomerate known as “SPYRAL”. Using a series of “Hypnos” that conceal his identity, Dick has blended into the shadows and has actually been working as a double-agent undercover for the Batman.

But after the recent “Endgame” event detailed in the pages of the Batman in that final confrontation with his arch-nemesis, the Joker, the Dark Knight was apparently defeated as well. Pronounced “missing” at the scene, Bruce Wayne has reemerged, but has no memory of his time as the caped and cowled crime fighter. Dick recently returned to Gotham to pay his old mentor a visit, and disguised himself as an “old friend” of Wayne’s hoping to try to rekindle some spark from the past. Unfortunately their reunion was interrupted by an intruder.

Someone does not want Dick retracing his steps, looking back and they don’t want him around Gotham. With very little recourse, Dick arranges to coordinate with his Batman Family, including Red Robin, Red Hood, and Batgirl and confide in them that he is indeed still very much alive. He explains to them why the decision was made, and why Batman chose to exclude them from the truth, but now Bruce isn’t who (or what) he used to be, there’s a cop running around the streets calling himself “Batman” and there’s a new mystery afoot.

Last year’s widely successful weekly series Batman Eternal expanded on the Batman’s mission and included the perspectives from all over Gotham City, including Gordon’s and introduced new allies like Red Robin’s industrious protege Harper Row, Bluebird and the newest crime-fighter on the beat Spoiler. With Eternal having run its course, DC Comics promised they’d return to the weekly periodically and now have with Batman & Robin Eternal. With Batman out of commission, at least for the moment, the focus turns to Dick and a case from his early days, when he was Robin.

SPYRAL’s Agent 37 has gone “off the grid” and brought together his Batman Family to prevent an assassin that’s hunting each one of the them, and unravel the mystery surrounding the appearance of Cassandra Cain. If that name is familiar to readers, in the pre-New 52 continuity, Cassandra inherited the role of Batgirl, and was the daughter of one of Nightwing’s most notorious foes Lady Shiva. Uniting under one banner, Dick and his brothers must protect Bruce Wayne from a murderous plot, connected to their very first case as a duo, and figure out who is “Mother”.

All the while, all around the country, some former friends are serendipitously coming together. Roy Harper, Arsenal makes an acquaintance. Dick crosses paths with a tempestuous Atlantean, and then gets a “call” from Lilith warning him that someone is watching. If we’ve learned anything from the recent malleability of the post-Convergence DC Comics multiverse, it’s that energy is transposed. Donna Troy was recently reanimated in the pages of Wonder Woman after having being all-but obliterated by the events during FlashPoint.

In this post-Convergence continuity, where the Crisis on Infinite Earths never occurred and a battle is being waged across the Multiversity, titans are caught in the middle of a battle between Darkseid and the Anti-Monitor, is room for the original Teen Titans? The hunt is on. Stay tuned.

Check out the weekly Batman & Robin Eternal by James Tynion IV and Scott Snyder, and pick up the first issue of Titans Hunt by Dan Abnett with Paulo Siquiera and Gerald Borges.

Tags:Batman EternalDick GraysonNightwingTeen Titans
share on: FacebookTwitter Tumblr
previous article
Return to the Dawn of DC The New 52 with these Batman and Superman Figures
next article
Review: Justice League #45