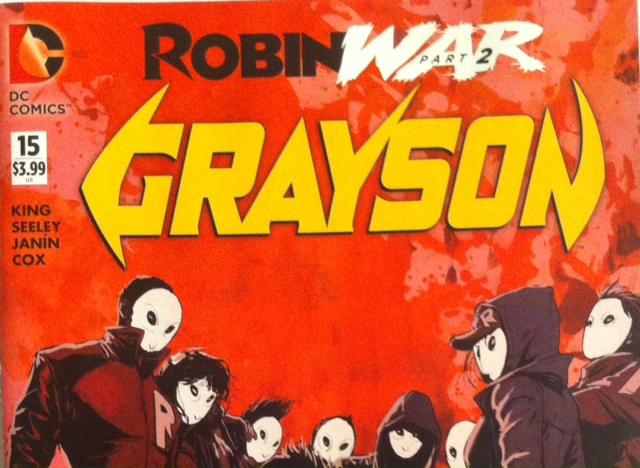 Batman is about family. Well, I want to read that issue! Despite all the darkness and isolation we’ve seen since the late ‘80’s and ‘90’s, it’s nice to see this element of the character acknowledged in the current iteration of the character. When you look at Batman’s origin it’s clear that the character is rooted in family and not only is that little boy trying to find vengeance and justice for his family, he is also trying build a new family.

In this 75th Anniversary year of the first appearance of the first Robin, Dick Grayson in Detective Comics #38, we are getting a lot of focus on Robin. And with Grayson #15 we just have a whole bunch of Robins. The nice thing about that is that King, Seeley and Janin are able to bring the magic touch they apply to Grayson month in month out to the aptly named Chapter 2 of Robin War- “The Originals.”

Dick, Jason, Tim and Damian are gathered beneath Gotham City with a cadre of Robins from We Are Robin. The Originals are pretty tough on them- they are not Robin. Dick understands that they want to be Robin though, and in light of the Robin Laws that have been passed these kids are going to need some help.

The plan is for the Originals to train the We Are Robins. Some of the upstarts are clearly better than others. Dick identifies these and develops a special plan. He has an Original go out with a newbee on a mission that seems to go awry. And from the point of view of the Robins it certainly does. However, it’s all part of Dick’s plan to keep the Robins safe. He feels a responsibility to these kids and wants to make sure they don’t get hurt trying to follow in his footsteps. He reveals it all to Duke Thomas just before Duke is captured by the GCPD and the Gordon/Batman. However, it’s all going to plan according to Dick. He was the one that tipped off the GCPD of after all.

The creative does such a great job of bringing the personality of the characters to life. It’s something that they’ve done with Dick in Grayson since issue #1, but here they manage to do it for all the Robins- Jason, Tim and Damian especially. The layout of the pages with the “behind the scenes look” of the Originals discussing the plan as they engage the newbees in the present is an extremely effective storytelling technique.

I don’t know if it was in the script or purely the genius of Mikel Janin, but it is one of those moments that stands out as comics at their best. This can’t really be done in another medium. I can imagine how it might be done on film with a voice over or jump cut, but it would impossible in traditional prose. Well done, gentlemen, well done. The feel of the book is so spot on it makes you want to pick up the rest of the crossover.

I would normally say that this type of crossover is an interruption in the series, but this issue is executed so well that instead it feels like a reason to jump on the event. Seeley, King and Janin do such a good job of making the characters feel right and likable that it doesn’t even enter my mind.

Bottom line. Grayson, whether doing it’s Spyral thing or crossing over to celebrate the 75th Anniversary of Robin is a gateway book for comic book readers. And that’s the way it should be.

Robin was partially conceived as a way for younger readers to relate to Batman strip. It may seem a bit odd in this day and age, but in the Golden Age of Comics this was a concern for the publishers. Seeley, King and Janin are telling stories that transcend the idiom and are laudable for their accessibility and technical skill.  4 1/2 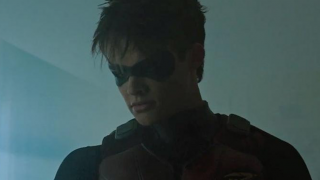