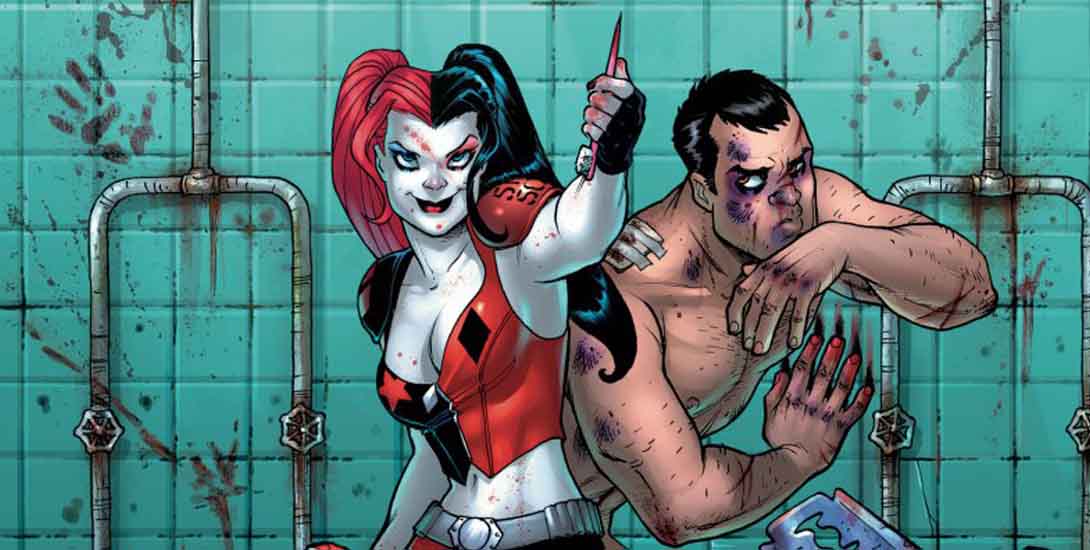 Harley Quinn is trying to put together a plan to save Mason Macabre from being killed in prison when an old enemy she thought was dead has returned.  Now she and the Gang of Harleys have to save themselves, Mason and Sy before it’s too late.

As we saw previously, Sy’s old nemesis Zena Bedemova has been brought back to life in a new cyborg body.  She has captured Sy and his holding him hostage in a bowling alley in Brooklyn.  That is not even the craziest thing to happen in this book.

Harley comes up with a plan to save Sy and stop Zena, which also includes lying to her so that she has enough time for a costume change.  But the plan is all for naught as it seems Sy and Zena found another way to resolve their difficulties.

A few dozen innuendos later, and they are back trying to save Mason.  I always like seeing them return Harley to her more “normal” blonde look, it’s a nice throwback to previous versions of the character before she was fully clowned.  Her plan doesn’t go as planned, but Mason lives to see another day.

You can’t really apply normal story criticisms to the Harley books, they are their own unique brand of craziness.  However, the two halves to the story really don’t mesh together very well, and I think each one of them probably could’ve been expanded to be it’s own issue.  One half ends and the other begins with no segue between.

There aren’t many out there like Harley Quinn right now.  This book continues in the zany styling that has come before it.  While the two halves don’t do much for the other, they are still fun stories.  I just would’ve liked to see some connection between the two to make a more cohesive whole.