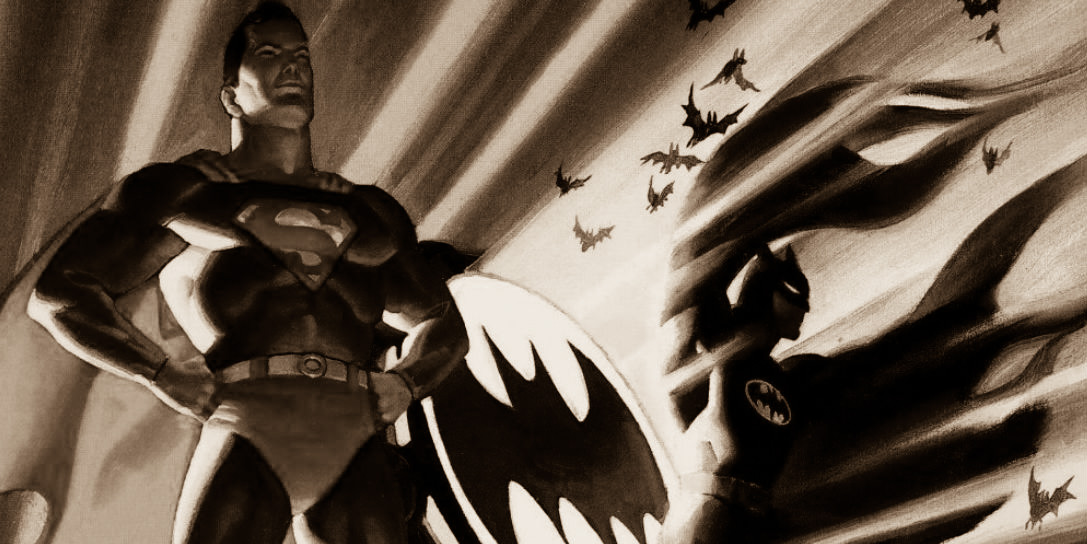 With the upcoming release of Batman V Superman: Dawn of Justice, DC Comics News is proud to present Countdown To Batman V Superman; a look at the history of these 2 iconic legends right before they meet for the first time on the big screen.

I’m going to take you back…..way back to the first time Superman and Batman teamed up!

The year was 1945, March 2nd to be exact! The U.S. Ninth Army crosses into Germany and reaches the Rhine River. The movie Dillinger was released in theaters based on the life and crimes of notorious gangster John Dillinger and The Andrew Sisters “Rum and Coca-Cola” was the number one song in the land!  Kids as well as adults gathered around the radio to tune in to The Adventures of Superman. Little did they know they were about to hear a historic meeting take place for the first time!

The Adventures of Superman was a serial radio program sponsored by Kellogg’s Pep, a vitamin infused whole-wheat breakfast cereal. The program ran from February 12, 1940 to March 1, 1951 and added many important contributions to the Superman mythos. The Daily Planet, Perry White, Jimmy Olsen, Inspector Bill Henderson, Kryptonite, and the phrase “Faster than a speeding bullet, More powerful than a locomotive, Able to leap tall buildings in a single bound, Look up in the sky, It’s a bird, It’s a plane. It’s Superman” would all make their debut on the radio program well before appearing in the comics. And like all the above, another first would happen on the radio show, the Superman/Batman team-up! 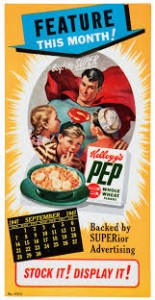 “Mystery of the Waxmen” a 12 part story that ran for two and a half months and marked the first time Superman met and teamed up with Batman and Robin. The villain of this story is Zoltan, who kidnaps scientists, encases them in a wax alloy and ships them to enemy countries for profit. When Batman disappears while on the case, Robin enlists help of Superman to find him!

An unsigned letter arrives at the Daily Planet asking for Superman’s help. Lois intercepts the letter and heads to the address listed to get the scoop. After Lois and Jimmy arrive they rent a boat and head into the bay. They happen upon a row boat drifting about with an unconscious boy inside. Just then they are capsized by a speed boat that was rushing by. Superman, flying by, after he himself found the note arrives just in time to rescue Lois, Jimmy, and the boy from a certain death. Superman notices the boy is wearing a cape and red leather vest with the letter “R” on it, he surmises the boy must be Robin. He also notices the boy has been wounded and immediately takes him to a doctor. Upon arriving at the doctor’s he quickly changes into Clark Kent and knocks on the door. The doctor seeing Clark struggling with the trio takes Lois to his wife and orders Clark to strip the wet clothes from Jimmy and the boy. Clark strips the costume from Robin and hides it from view. The doctor looks over the wound and tells Clark it looks like someone used a hot knife on him. The boy comes to and reveals himself as Dick Grayson and that he desperately needs to speak with Superman and only Superman. Shortly after, Clark introduces him to Lois and Jimmy. Lois presses the boy for information and again he explains he can only talk to Superman. Clark gives the boy a trenchcoat and escorts him out of the doctors office to get him away from Lois.

Clark takes him to his apartment and tells him to wait there till he gets back. Shortly after leaving, Superman appears and tells the boy he knows he is Robin. The boy confirms and goes on to tell Superman why he contacted him, “Batman has disappeared” the boy cried! Robin goes on to explain that Batman was working on the biggest case of his life and that the fate of the entire world was at stake! Batman said he would return by nightfall, but when he didn’t return that night Robin became nervous! Alfred informed Robin that half a dozen armed men were descending on their location and were surrounding the house. With the men banging at the door, Robin and Alfred fled to the basement and into a secret tunnel that lead to the boathouse. Robin and Alfred reached the boathouse only to find that it was being guarded by two armed men. They remained hidden in the tunnel all night and into the next when Robin saw his chance, one of the men left. Robin gave Alfred the letter with instructions and attacked the lone gunman allowing Alfred to escape. Robin made it to a boat and was fleeing into the bay when he heard the speedboat in pursuit. The men shot him and left him for dead, the next thing he knew he awoke at the doctors office. He mentioned he heard the men say they worked for a man named Zoltan.

Superman leaves and Clark returns with clothes for Dick and the two take a cab across town. Dick asks “what are we doing here” Clark points “see that building over there!” Dick reads the letters above the barred windows “Zoltan’s Wax Museum.” Clark explains that their was only one Zoltan listed in the phone book and this was their only lead. They look through the window at the wax figures. Clark thinks there is something familiar about them. Dick startled, exclaims “look to the left against the wall, that’s Batman!”, “But, he’s only a wax statue” said Clark!

Eventually, Superman discovers that this was the real Batman, sealed inside a super-hard wax alloy in a state of suspended animation. After being freed by Superman, the Dark Knight Detective vows vengeance upon Zoltan to Superman and Robin. “You’ll forgive me for saying so,” said Batman “but no one is going to make a dummy out of me.” Zoltan was captured and his business of selling kidnapped scientists to enemy countries disguised as wax statues was destroyed.

Batman and Robin would lend a hand from time to time (so series star Bud Collyer could go on vacation) and would go on to appear in several Superman radio serials. Fortunately about half of those have been released!

Bud Collyer portrayed the Man of Steel to great effect, using two different voices and tones when switching between Clark Kent and Superman. Joan Alexander was the third actor to portray Lois Lane and did so for 11 years. Batman would be portrayed by three different actors over the years Matt Crowley, Stacy Harris, and Gary Merrill all donned the proverbial cowl. Robin was voiced by Ronald Liss and show narrator Jackson Beck pulled double duty as Alfred Pennyworth.

Bud Collyer and Joan Alexander portrayed their respective characters in all 18 Superman cartoons produced by the Fleischer/Famous Studios. Bud would reprise his role as Superman on record albums and animation for The New Adventures of Superman (1966-1967), Superman/Aquaman Hour (1967-1968), and Batman/Superman Hour of Adventure (1968-1969). Beck would join his colleague as Perry White and as narrator for all three shows.