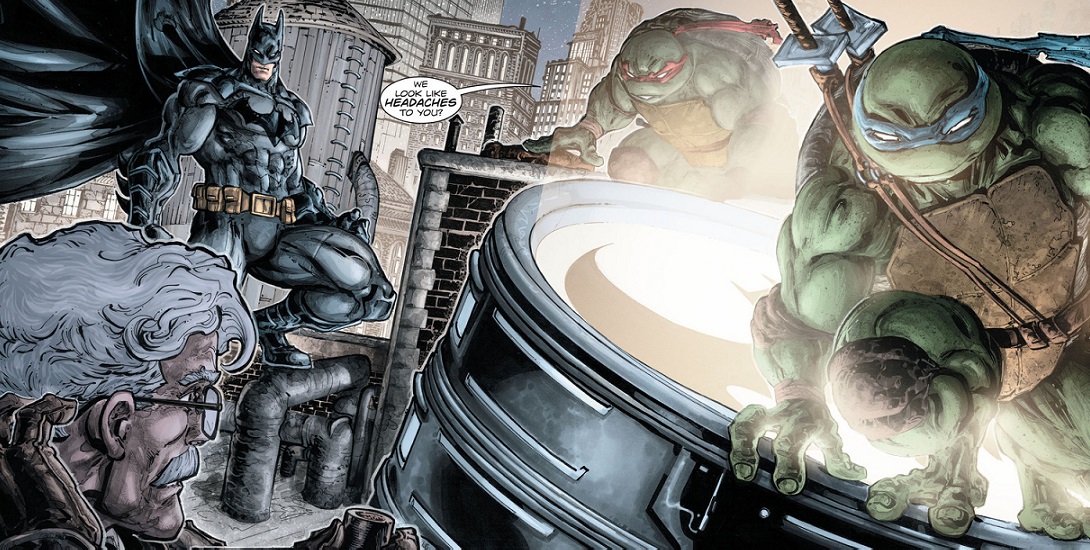 Other worlds and dimensions are nothing new to the DC multiverse, so in this new series IDW has had the chance to play in DC’s sandbox. Batman tracks a new aggressive ninja organization that has found it’s way to Gotham and is going after a top scientist in the field of theoretical physics. During his investigation he runs into Master Splinter & the Turtles and they team up against a common foe, The Foot!

The Penguin sees this turn of events as an opportunity to make new friends but soon finds himself powerless against The Shredder and his plot, even becoming the first victim to the Ooze which gave the Turtles their life! What madness could be unleashed in Gotham with Shredder turning people into mutants!?

Back at the Batcave, Mikey and Donny have hooked up a video game to the massive batcomputer screen and are enjoying the Batcave when they are suddenly interrupted. Promptly the Turtles learn not to underestimate the son of the bat and are taught a few new moves in battle.

Commissioner Gordon lights up the sky with the bat-signal after he discovers the Foot and has them surrounded in Arkham. Batman turns up as always but this time he has four new green companions. Gordon lets them know the situation and they head off to Arkham to see what havoc the Shredder can cause in the mad house. Not to mention having a final cameo to really set a war in motion!

Tynion IV, Williams II, and Colwell weave a very interesting tale in Gotham that blends itself between the two worlds as to not loose the charm of either. The writing of Batman and Robin feels right to the characters. The art style is a bit of a mash-up of the old TMNT comics and some of the new age Batman for an interesting look that will set it apart from other cross-overs.

The art style lends itself well to the story but Batman is depicted in a very bright way relying heavily on grey which feels uncharacteristic of the current art styles used to depict him.

Overall, it is a little more light hearted than recent Batman stories but it is a fun read and feels right with the Teenage Mutant Ninja Turtles adding some cheer into Gotham.

What can I say that the Dark Knight hasn’t already….