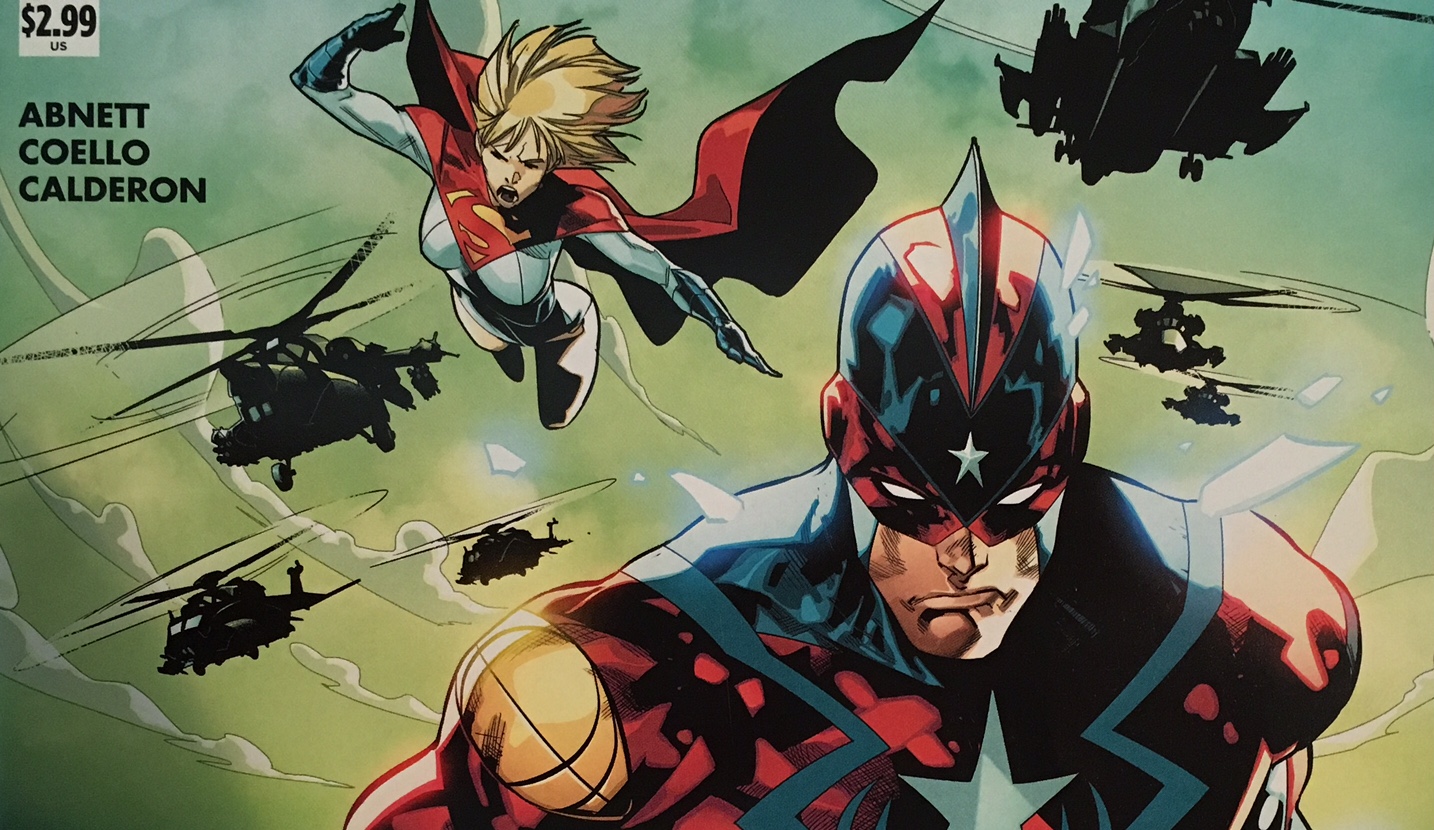 Alan Moore and Dave Gibbons’ Watchmen is perhaps the high watermark in the Super-Hero genre. They deconstruct the costumed vigilante and super-powered entity equally. The past couple issues of Earth 2: Society have gotten really interesting. While there is a definite Watchmen vibe, it’s certainly not a rip off. Although, Abnett is clearly riffing on the same themes, he’s heading in a different direction. The Wonders of Earth 2 are fallible. They’ve already lost one Earth. They are vilified and distrusted by the populace and at odds with themselves. However, where Watchmen had a god-like being struggling with humanity and failing, Earth 2: Society #12 offers a god-like Wonder making the human decision from a god-like perspective and bringing to mind the original idea for Watchmen, Moore’s un-produced “Twilight of the Super-Heroes.” As uneven as this series has been, it seems like it has finally found a unique and ground-breaking direction.

Earth 2 is about to be at war. The two cities fighting for energy resources are about to get hot. This has instigated the World Army and different factions of Wonders to action with wild cards still on the sidelines. Commander Steel is ready to start killing to prevent killing. He’s opposed by Power Girl, Flash and Huntress. Meanwhile, Green Lantern is coming to terms with his god-like powers and he turns to Val-Zod. Val’s already turned away from his role as Superman, and Alan comes looking for perspectve. And he gets it.

In New Gotham, Batman is able to rally Hourman to his side and the two of them plus Ted Grand and Red Arrow for a street level grouping of Wonders. In Amazonia, Kendra offers her services as an ambassador for the combined Amazonian and Atlantean communities. The real turning point for the issue comes when Alan decides to use his power to give the needed energy to the world by giving up his power. It effectively ends the conflict between the waring cities and the Wonders all all stand down. The move by Alan is where Abnett finds a new direction for the characters in Watchmen mode. Whereas Dr. Manhattan was too late to stop Ozymandias, Green Lantern is able to make a move that is significant. It appears that Green Lantern has saved the world by using his god-like powers as a human.

The biggest positive from this issue is the fact that Earth 2: Society finally feels unique and different. It seems like it’s finally found a direction. It would easy to chastise this book for incorporating the themes from Watchmen, but the statement it makes is different enough that is more of a call and response- think Revolver: Pet Sounds: Sgt. Pepper’s for a musical equivalent. This has elevated the book to a new level. While it’s struggled with character, Alan’s move has finally defined things in a new way. What if a god-like super-being gives up his power for the greater good?  Does sit pell an end or a new beginning?

Green Lantern’s move effectively invalidates everything else going on in the book. Batman’s consolidation of street level heroes and Hawkgirl’s ambassadorship are clearly overshadowed. While they have something to contribute, it seems like an uphill battle to trump what Alan has done. The next few issues will tell.

This is the time to jump on this book. It’s in a totally different direction from the original original Earth 2 concept when it was launched under James Robinson 4 years ago. Whatever editorial mandates have contributed to it’s unevenness, it seems like this is the point in which the concept becomes relevant. However, with Rebirth on the horizon, one questions the future of this version of Earth 2.