Adventures of Supergirl #1 is written by Sterling Gates with art by Bengal. 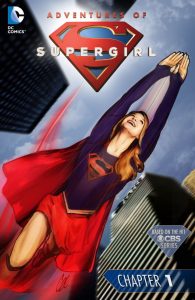 A villain called Rampage, a giant orange monster, attacks a football game that Kara and the D.E.O. attempt to stop. They track Rampage into the sewers who kidnaps Supergirl. At Rampage’s house, Kara learns that she is an alien that was imprisoned on Fort Rozz with her sister. For those who don’t watch the television show, Fort Rozz is a space prison built by the Kryptonians. It was stuck in the Phantom Zone along with Kara after Krypton exploded but both managed to get out. The Fort Rozz prisoners have been loose on Earth ever since and it is the job of the D.E.O, where Kara’s Earth adopted sister Alex Danvers and Hank Henshaw work, to take them down with Supergirl’s help. Rampage tells Kara that the Earth’s atmosphere affected her and her sister turning them into Hulk-like creatures when they get angry. Supposedly, Alex killed Rampage’s sister on a previous mission. For this reason, Rampage wants to kill Supergirl because she overheard Alex refer to them as sisters. Alex manages to arrive in time with the D.E.O. to save Kara and Rampage dies in the process. The issue ends with Kara refusing to hang out with Alex because she feels like she can’t trust her.

The cover by Cat Staggs is incredible. It’s just a really impressive looking piece that stands out from a lot of comic book art.

If you didn’t already know, this comic is a tie-in to the television show formerly on CBS. Gates manages to mainly use what works about the show which is nice. The tone and Kara’s personality are uplifting and bright. It’s a fun vibe that Gates is able to match perfectly to the show. Additionally, the show is at its best when it is focusing on Supergirl fighting the villains of the week. The show has always done a good job of establishing sympathetic villains that still work as a threat and bring up a personal conflict for Kara. And that’s all this issue is. In my opinion, the show falls apart when it chooses to focus on the soap opera elements of the show such as the love octagon featuring Winn, Jimmy Olsen, Lucy Lane and several other characters. Cat Grant is also absent which is nice because I have never liked that dynamic. The book is Supergirl doing what she does best.

Rampage isn’t an incredible character and the show has done better villains but I still appreciate the attempt at making her sympathetic. It’s also a great idea to put Supergirl against a villain whose main motivation stems from a strong relationship with her sister. A lot of what motivates Kara on the show is her relationship with Alex so it’s cool that Gates makes that parallel. It makes the conflict personal for Kara.

The art is great. It’s colorful, vibrant and just fun. That really is the optimal word here. It’s hard not to smile just looking at Bengal’s art.

While the art is good, it doesn’t really match the show. Supergirl and Alex look nothing like their respective actors and that might bother some people. What bothers me is that the art on the cover and the art inside look nothing alike. That’s a huge pet peeve of mine in comics. I think there should be a consistency between the cover and the inside art.

I was slightly irritated that Kara was kidnapped and had to be rescued by Alex. Another problem I have with the show and the Berlanti-verse at large is an insecurity about certain characters. There is a constant attempt to prove that characters like Alex and Green Arrow, normal people, are just as skilled if not more so than powered-characters such as Supergirl and Flash. I feel like the writers miss an opportunity to have characters really deal with the fact that there are people in the world who are genetically superior. It doesn’t make Alex less heroic and would actually make her more so because we could see her try even if she doesn’t succeed. But the show insists on making her an unfailing bad ass 100% of the time while making Supergirl either weaker or dumber. It mainly bothers me in this issue because I’ve seen it so much in these shows and I’m tired of it.

Certain characters have secrets about them that are revealed at a point in the season and I’m unclear if this book takes place before or after the secrets are revealed to Kara and Alex. Like Arrow Season 2.5 and Flash Season Zero, the book really doesn’t add much to the plot of the show. It’s just a fun extra adventure. 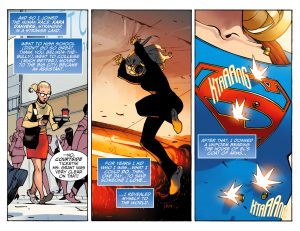 Honestly, I would recommend this to people who haven’t watched the show over fans. The book is self-contained and gives the readers the information one would need in order to understand context. For people who have watched this show, the dump of exposition is incredibly tedious. Most of the characters from the show don’t make an appearance which will more than likely irritate fans but people who didn’t like the show may find this more bearable because the CW element is taken out entirely. Personally, I enjoyed this book. It features what I enjoy about the show and this character in a fun story with great art. I ultimately recommend it to fans of the character Supergirl and people who want a fun read.

Get Across these 10 Things before Rebirth