In this final issue of the series, Giffen and DeMatteis have opted to reflect back on the beginning by counterpointing the League’s final battle with the Legion of Doom with flashbacks back to the League’s origins. In the flashbacks, the “Wonder Twins” Teri and Terry debate whether the purpose of the League is to win against their enemies any way they can or to inspire others to fight for their freedom.

However, such questions aren’t easy to resolve – and likewise neither is the final battle. We are not shown the outcome. We are left hanging. The title is literally “Cancelled!” and as such, we aren’t given the proper conclusion that we would expect of a finale.

What we get instead is a preview of what lies ahead for the characters. The story starts with a look back and ends with a look ahead. The Flash and Batgirl are left in the present day DC Universe. However, this raises the question: which DC Universe? Does this mean that these characters might appear in the New 52/Rebirth books? But wasn’t the series set in the future of the pre-Flashpoint DCU? 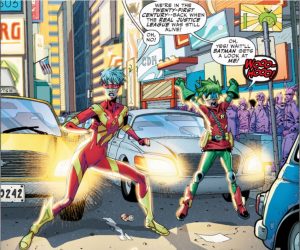 Giffen and DeMatteis’ humour was in fine form. Despite the serious themes being played with, the humour keeps it from sounding heavy-handed or pompous. There’s a final throwaway gag as to why G’Nort and Larfleeze didn’t appear in the story. Also, we get a final look at the future Superman at his most obnoxious. 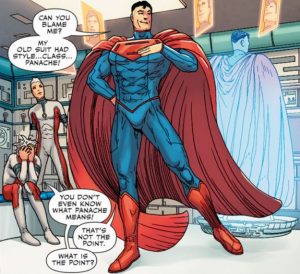 So much was left maddeningly unresolved. How did the battle end? What happened Blue Beetle and Booster Gold? Where do things go from here? We are left hanging, apparently intentionally. Hopefully that means that Giffen and DeMatteis will get a chance to finish their story in a future title.

Ultimately, this wasn’t a very satisfying resolution to the series, but it serves as a good setup for some sort of continuation of the story – whether it be a Justice League 3002 series or by guest appearances in other DC titles. I choose to be optimistic and hope we get some sort of follow-up to the series in the future.