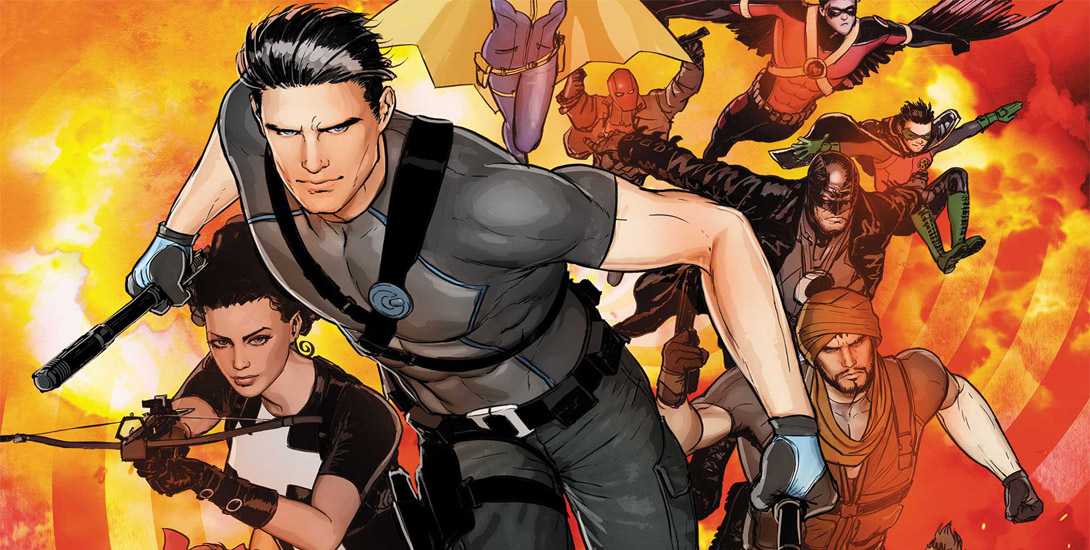 With so many characters, the most important thing in telling a good story is the integrity of the character itself. A long time ago, Dick Grayson would’ve been solely seen as Robin, the Boy Wonder- the iconic kid sidekick. In the years since he was first allowed to grow as a character, he’s developed into something altogether differently iconic. With the finale of Grayson, it’s clear that this focus on character has been the main focus of the series since the beginning. At times it seemed to be veering sideways, but once it found its stride it was obvious that this series was designed to build up and celebrate Dick Grayson as a character. While it’s true that Superman would still be Superman no matter what his character was called, Dick Grayson has successfully encompassed different identities all while remaining recognizable as Dick Grayson under it all. This celebration is no more apparent than in this final issue. With Rebirth on the horizon, it comes as no surprise that this issue sets up Dick’s transition to the next stage of his life.

Dick is locked in battle with the mind of Otto Netz inhabiting Helena’s body. Dick knows it Netz, but he sees Helena. Otto intends to use Somnus to wipe out the memory of Helena from the world including every personal memory and document that would give record of her existence. Netz would then use Helena’s body as his vessel to carry out his nefarious plans for world domination. Dick convinces Netz to use him instead of Helena. Netz makes the switch and Dick and Helena have a moment together in Netz’s mind before Helena is thrown out.

When Netz takes over Dick’s body, Netz believes that he has the advantage and will easily break Dick’s mind. Netz has woefully underestimated his opponent. Everything Dick has gone through in his life, a kid acrobat, training with Batman, stepping up as a leader in the Teen Titans, becoming his own man in his Nightwing identity, has prepared Dick’s mind. For all the physical training he’s had, it’s the mental toughness and agility that he’s developed that allows him to dismantle Netz. It’s not even a challenge for Dick, at least his confidence makes it look easy. He’s able to free himself and Netz’s consciousness apparently evaporates away. This leaves Helena and Dick with a few moments to recap.

Helena’s rediscovered her roots as a Bertinelli and what that means. This sets Helena up for a new direction which will end up playing out in Batgirl and the Birds of Prey. Most interestingly, Helena used Somnus to make everyone except herself and the Bat-family to forget Dick Grayson, returning Dick’s secret identity to him intact.

The character of Dick Grayson plays strong and we get to see how all of Dick’s past identities have shaped his development. This more than anything epitomizes this series. It’s Dick strength of character and inner strength of identity that brings him through this trial. He is not intimidated by Netz and is able to see him as just another wacky super-villain.

The loose end of Agent 1 is tied up as he becomes the new head of Spyral- Patron. This was the biggest potential gaff, but it is even satisfying here as it is left open ended for future stories.

If you can invest in all 20 issues of this series it is a great companion to Dick Grayson’s greatest adventures either as Nightwing or as part of the New Teen Titans. It clearly works as one big story and is a must read for all Dick Grayson fans. I am sad to see this series end, but I have confidence that Tim Seeley, Javi Fernandez and Marcus To will continue to tell great Dick Grayson stories in Nightwing launching in July.