Fables Returns to Vertigo With Everafter: From The Pages Of Fables

That’s right starting this September FABLES will begin again with Everafter: From the Pages Of Fables. It is going to be a monthly release which comes from the same team who did the digital-first series called Fables: The Wolf Among Us. Everafter takes place after Bill Willingham and Mark Buckingham’s beloved Eisner Award-winning series.

Everafter is a spy thriller featuring a covert-ops team whose mission is to save this newly magical world from itself,” explains co-writer Dave Justus. “The story has a uniquely Vertigo flair, filled with twists, double-crosses, and agents willing to give their lives for (fairy) queen and (goblin) country!

Bill Willingham talks about how much an amazing job Matt Sturges, Dave Justus, and Travis Moore did on the video game adaptation of the Wolf Among Us and how it helped make this new spin-off series with some new bends and twists to really help set it apart from the known Fables and the sharp rise of magic.

Matthew Sturges, co-writer has explained how most people hate the feeling of cliffhangers that come at the end of great books. Bill has planted many different potential things within the final issues of Fables that made the team just too itchy to sit still. So they got the team back together and took the stories of the characters that we love. All the while in this new series there is going to be a new villain and vibrant new characters such as the Shadow Players. Which are a global network of agents containing both Fable and mundane all being tasked with policing this new world plus protecting itself from itself. Travis Moore had this to say about Everafter:

Everafter is an extraordinary opportunity for us to build onto the stories of characters from FABLES that we love, offer new revelations, flesh out the lives of some lesser known characters, and bring brand-new Fables into the mix…For me, it’s always a joy to get to design new characters; I’m bringing a more dynamic action style to the FABLES community than fans have seen from me.

As an added bonus here is some cover-art work for the new series, enjoy. 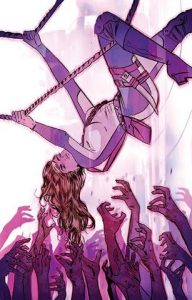 “NIGHT OF THE MONSTER MEN!” The First Rebirth Crossover is coming!

‘Constantine 2’ Director Gunning for An R-Rating

Filmation’s ‘The Adventures of Batman’ Is Coming To...