Bamm-Bamm and Pebbles take center stage in the third installment of the Hanna-Barbera/DC reboot of The Flintstones. They made their first appearance in issue two, but they get to shine here. The missing piece of the original TV series shows up when aliens invade Bedrock and the Great Gazoo is left behind. The sub-plot delves deeper into Fred and Barney’s service in the Paleolithic Wars against the Tree Dwellers. 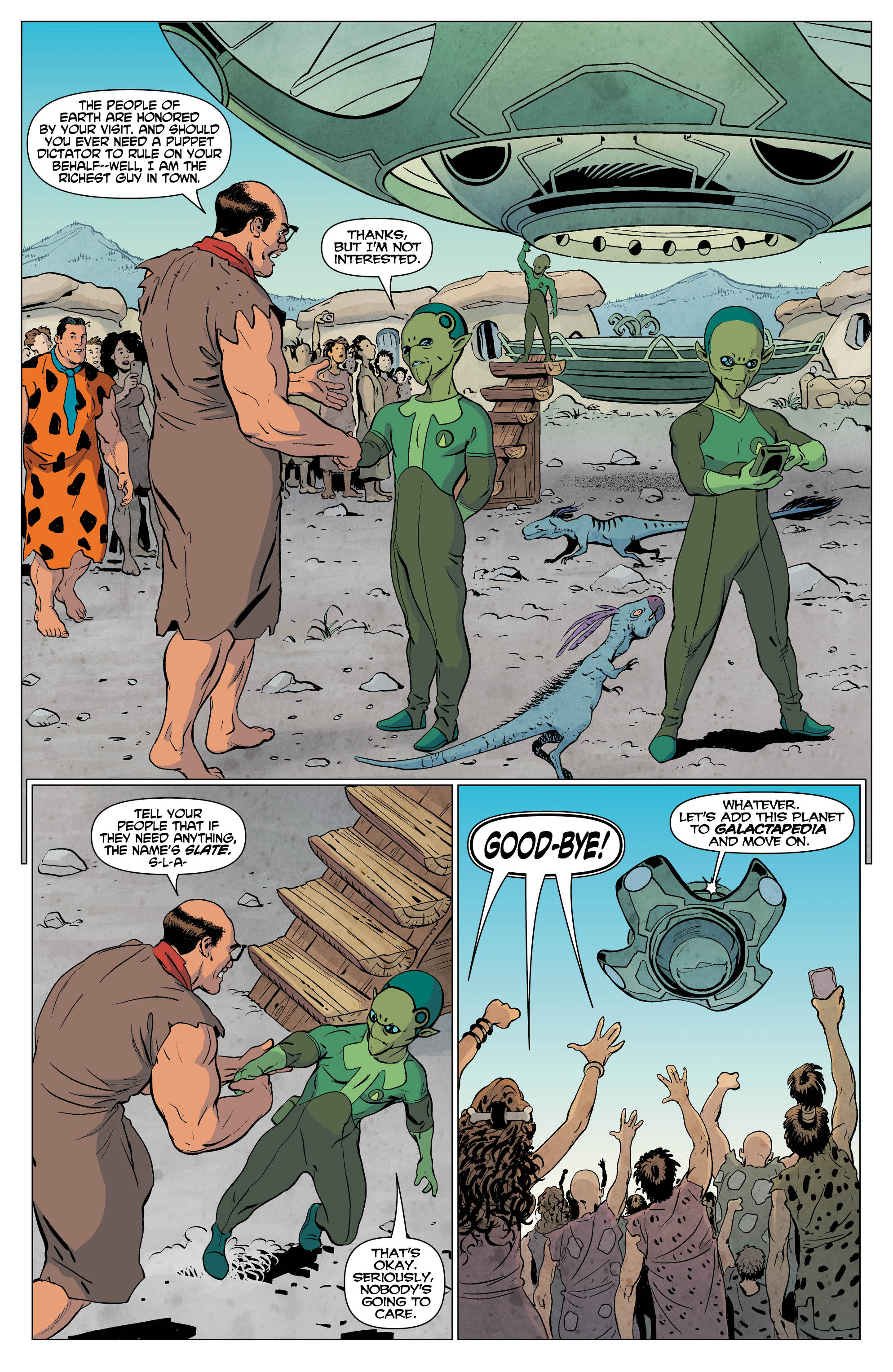 The guest stars keep showing up, as with the Bedrockian version of Carl Sagan, Professor Sargon, explains the universe to a bunch of 8th graders. Pebbles, who sports a post-modern, two-foot tall pompadour, questions his theory that the earth is resting on a giant turtle. As a distraction, Professor Sargon launches a chimpanzee called Sergeant Grumbles into space by dropping a dinosaur on a teeter totter. The joke, just above the title of the issue “A Space Oddity,” Sgt. Grumbles says, “Tell my wife I love her very much.” Totally brilliant. 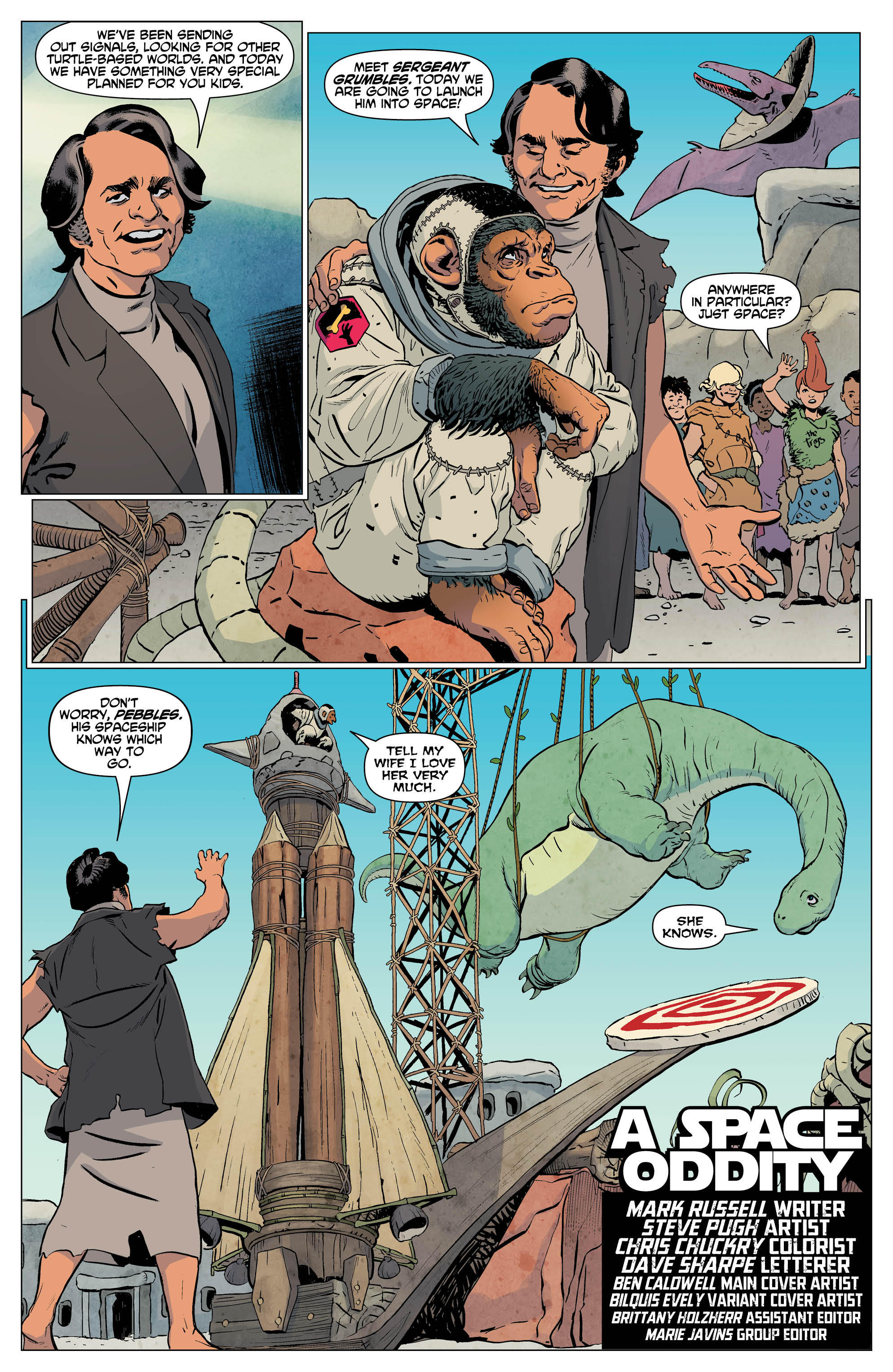 Fred and Barney continue to deal with the pain of being war heroes who went from getting parades to being totally forgotten. The social commentary presented in this book is not even close to subtle. It is shouting as loud as it can. The only way to miss it is to not read it. One would not think The Flintstones is a place for social commentary, but it always was. The original show was a prime time sitcom, not a Saturday morning cartoon.  It was always a show for adults. Satire is not for everyone, but thankfully, Russell doesn’t care. He is being honest and he wants his readers to see his point of view and think about it.

The art team of Pugh and Chuckry own this book. Fred is not an egg shaped moron. He is complex. His facial expressions show that. Physically, he is a mountain of man. He is a war veteran who works in a quarry and it looks like it. The dinosaurs are to scale. The world looks as real as it can. There are panels where people are watching TV and, as the technology is so new, it is still in black and white. Chuckry captures this perfectly. For those readers who actually grew up still having black-and-white TVs, the nostalgia is wonderful. 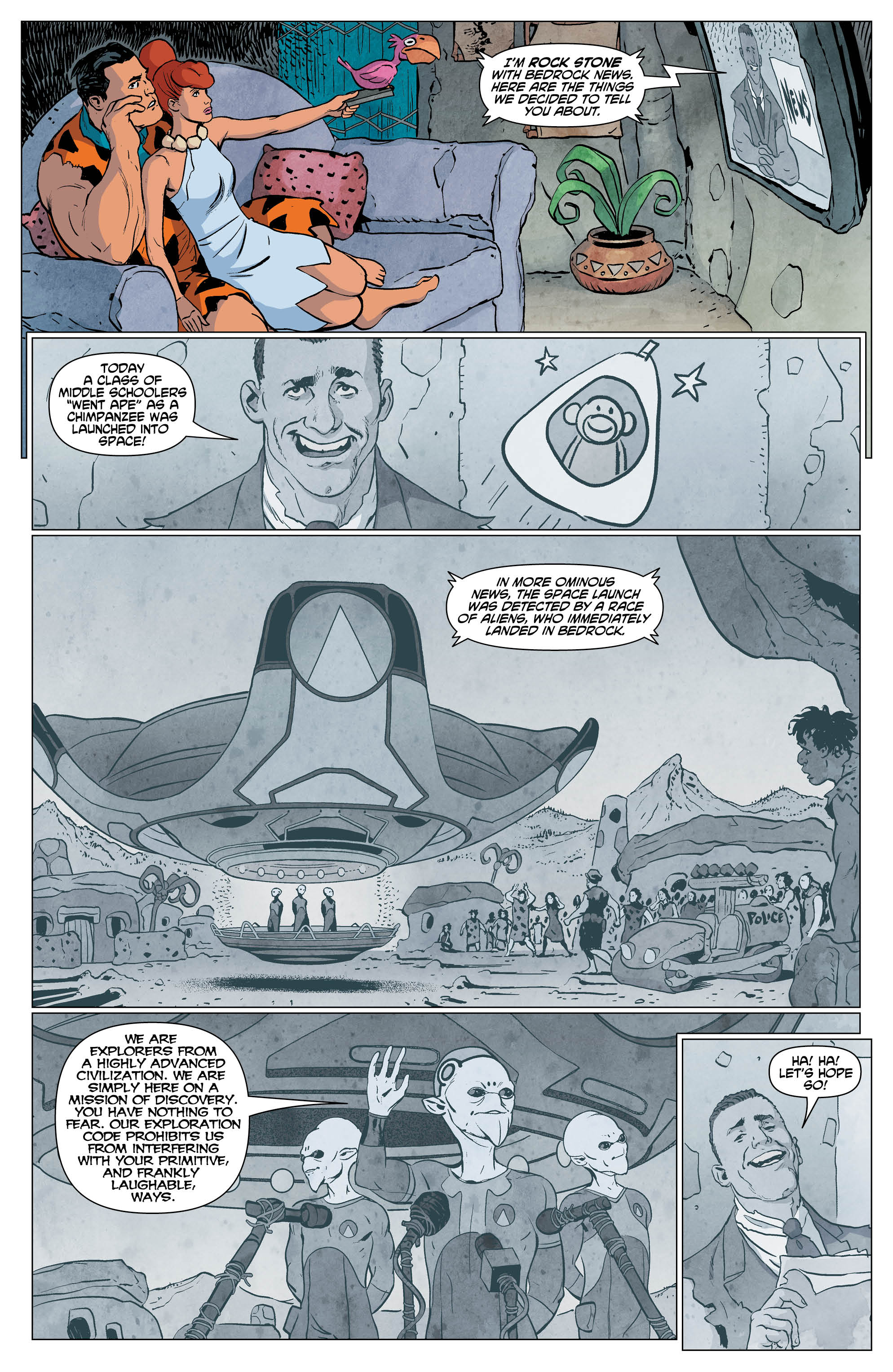 The Great Gazoo was always the weak link in the original series as it was the Paleolithic version of a shark jump. In this issue, the space invasion by spring-breaking, mouth-breathing aliens who have death ray apps on their smart phones is a shark jump too. The second issue was so good that this one feels like a step back.

This book stretches everything you think you know about the residents of Bedrock. It is clever, it is funny, and it is touching. While this book is rated T, it might go over some younger readers’ heads. Still, this is a solid book and it is promising.