Summary
Keaton, Barlow and the good Doctor Victoria are on “thin ice.” That means they are in the wasteland that is the desert just north of Los Angeles. Their hauler, which Barlow named the Snow Bunny, is close to overheating, which in a frozen apocalyptic world is the definition of irony. They are being chased by the Snow Queens, a band of women who worship an ice goddess and the Firemen, who in Ray Bradbury style, start fires. Nothing good is going to happen there. Finally, we meet the evil gang boss behind the bounty on Dr. Victoria’s head and thus Keaton’s head. He is called, again, with just the right amount of irony, Boss Burns. 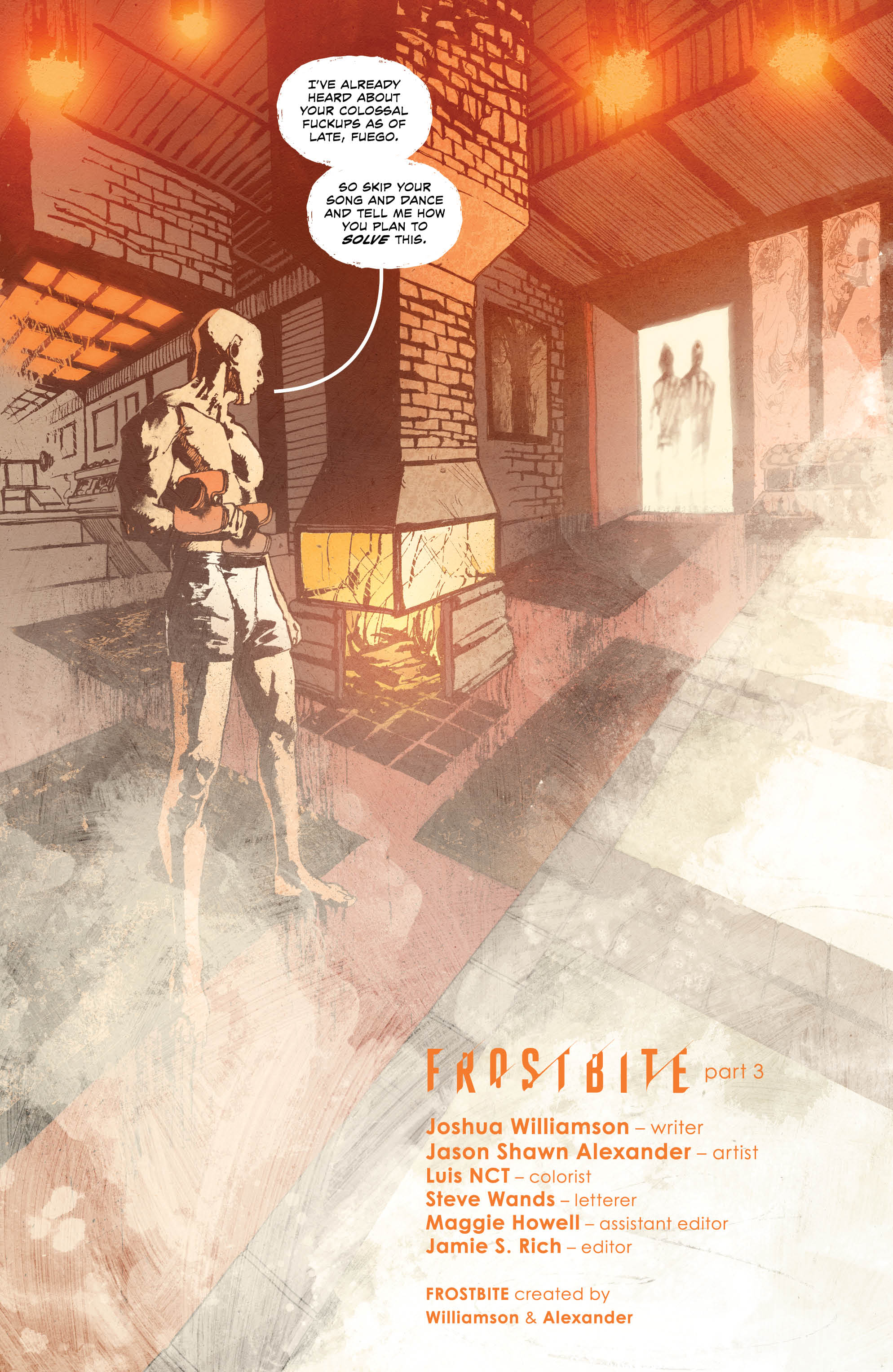 Positives
Josh Williamson’s world is a scary, horrible place. Each month I read this book I think about how awful it would be for this to be real and how amazing it would be to see it on TV. Seriously, HBO, TNT, someone buy the rights this book. Make this happen. Who would play Keaton? Hmmm? I will think about it. For now, I will just keep reading this book.

The monsters in this world are humans. The scariest monsters almost always are. Who needs zombies and mutants when humans will do almost anything to survive? There are no polar bears. There are no killer bees. There is no deadly gas. There is just humans and disease that spreads through human contact. Humanity, for all of its pluses, sure loves to kill. There is something in us that allows us to join gangs and exploit the worst in a situation. Williamson has tapped into that reality here. Sure, he puts the characters in a terrible situation and he turns them loose. Then, he asks the readers to decide what they would do in the same situation. Would they kill? Would they maim? Would they, just to survive the cold, join a gang and kill to be accepted? We all think we know the answer, but Williamson really makes us think about it. It is a story that can only be told in Vertigo. 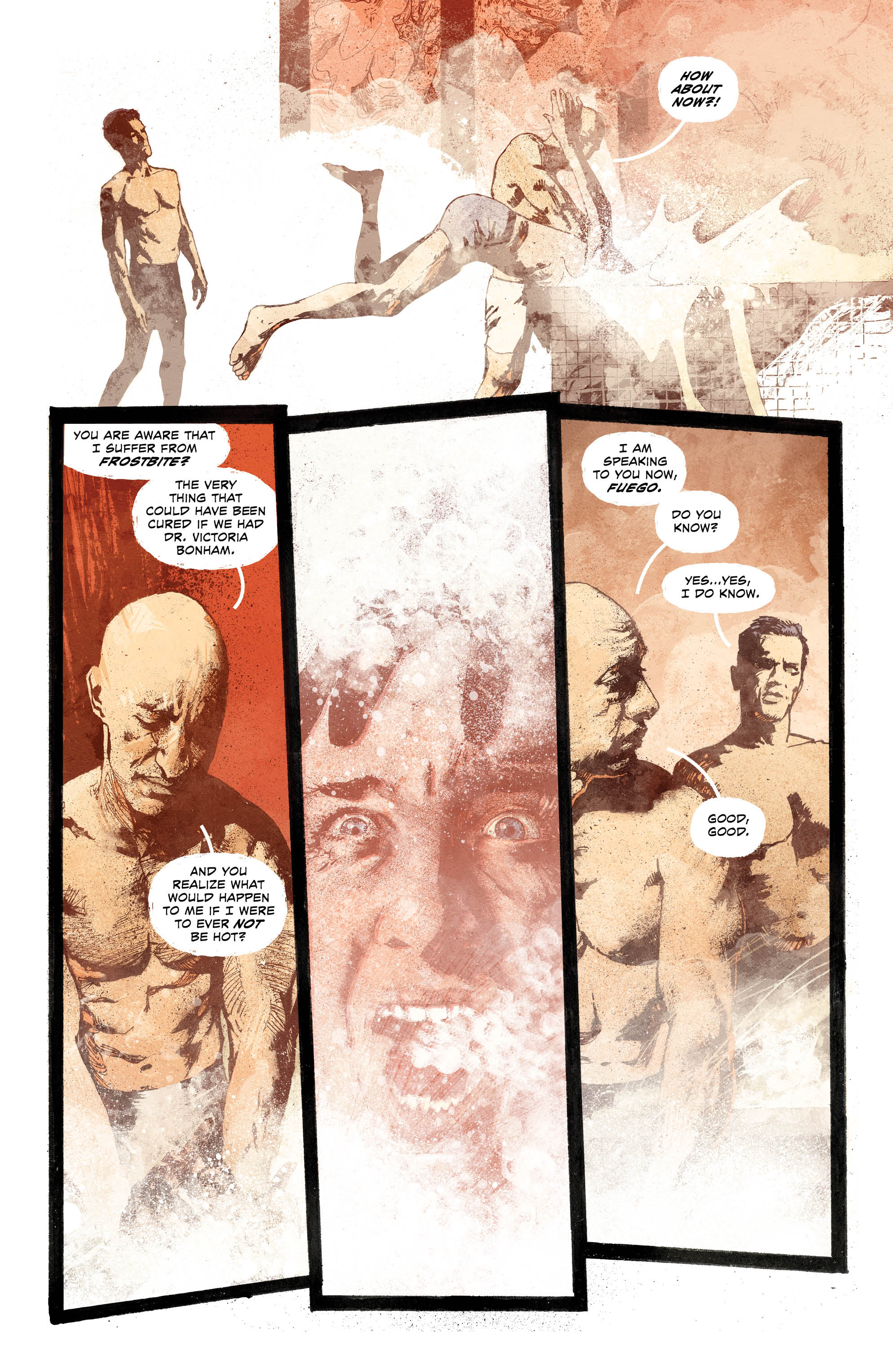 Jason Shawn Alexander must have spent a lot of time in the arctic or in Alaska, or buried in a snow drift. I understand that art is supposed to convey meaning and pack an emotional punch. I love art for that reason. Alexander has painted his masterpiece in the panels of a comic book. He never gives us a full view of anyone or anything. Even when we meet the villain, who has Frostbite and thus needs to live in a steam room, we do not see him. He is clouded by steam. He is obscured by vapor and smoke. The feeling of separation is clear. In this world, something keeps humanity separated. Cold, heat, hate, disease…you name it. Something is out there keeping humanity apart and allowing them to do horrific things. 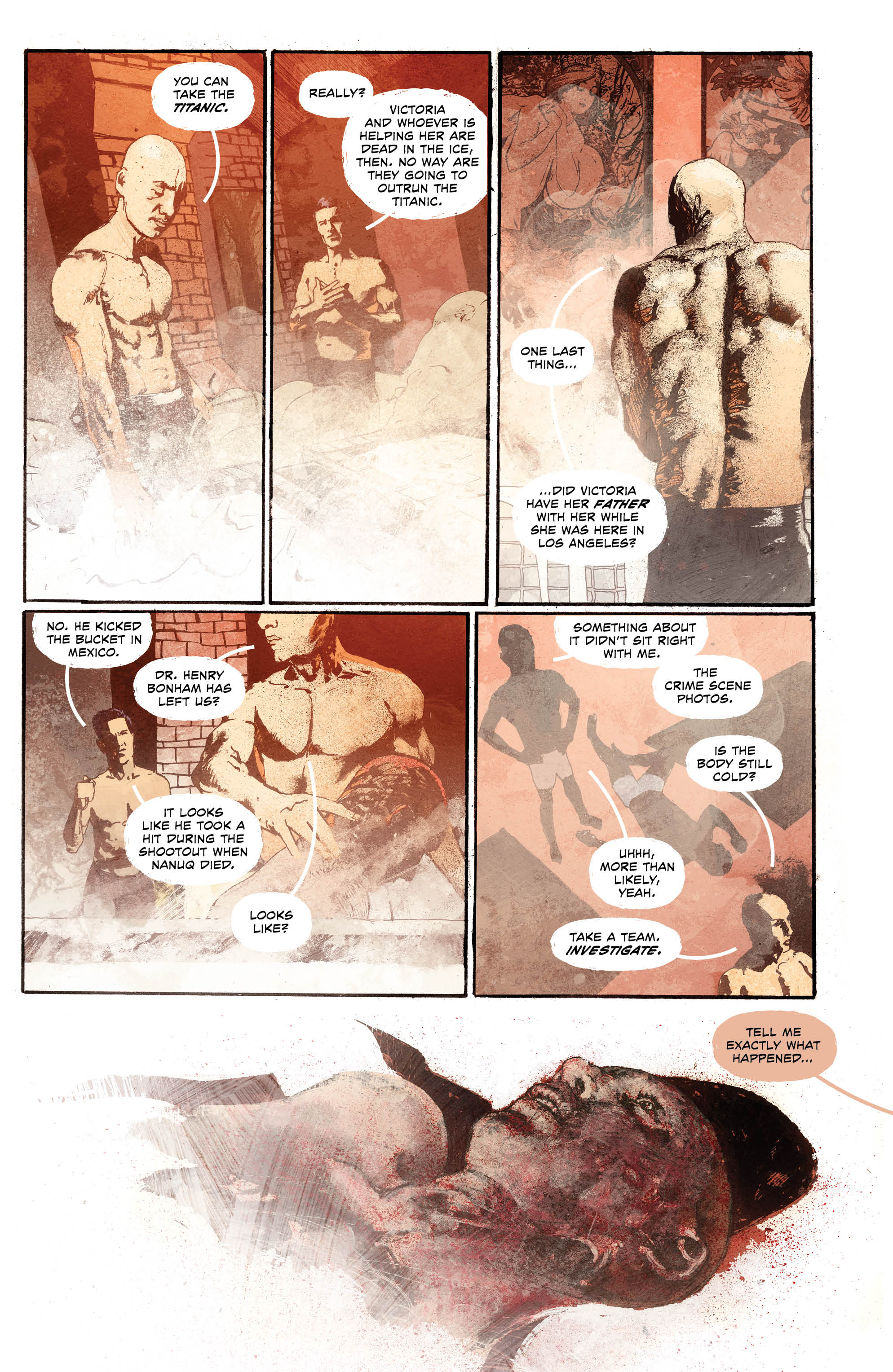 Negatives
Nope. This is genius.

Verdict
Alexander and Williamson have taken a page out of Joss Whedon’s playbook.  That book clearly reads: Do not shy away from killing characters. In real life, in real horrible situations, people die. People do terrible things. That is the world. This world is terrifying, but I can not help but notice, that as “distant future” as it seems, I think I see a bit of those people in every news story I read.  That last panel is amazing. Read. This. Book!

Review: Batman vs Bigby! A Wolf in Gotham...