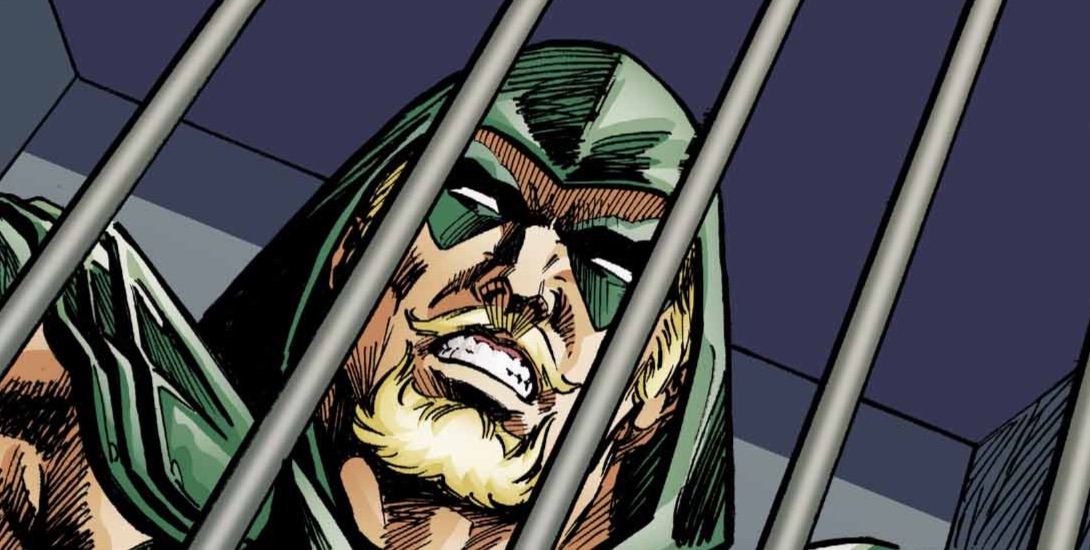 The cover by Juan Ferreyra is gorgeous. I love Dinah looming over Ollie as he drives away. It’s a wonderful portrait of the two characters.

The interior art is done by Otto Schmidt. The art displays just how bad Seattle is right now for anyone not in the upper class and it’s well done. One of the things I enjoyed most about Schmidt on this book was his work on the backgrounds. Seattle always looked incredible but now he has to draw it looking miserable. It’s kind of a bummer which works well for the book.

One of the reasons I prefer DC over Marvel, although I love both, is that DC heroes mainly live in made-up cities while most Marvel heroes live in real cities. There are exceptions on both sides including Green Arrow sometimes. I just think the mythology around a place like Gotham can be fun and creative. I like that Benjamin Percy has taken a real city and is giving it a mythology in order to become Star City. It’s interesting and I like learning about it.

I like the structure of how Percy shows us Star City. At first, it’s the Mayor explaining how great it is and everything looks fancy and futuristic. The book then immediately cuts to the streets and everything is practically on fire. Progress for some usually involves stepping on others. I like that this is what Team Arrow is dealing with; they’re fighting for the little guy.

The end of the book teases the upcoming issue in a really nice piece by Schmidt. The most exciting is that it looks like Green Arrow is going to team up with Nightwing, Harley Quinn (wearing her movie costume?) and, most importantly, Batgirl. That is going to be awesome.

Why is Emi not Red Arrow? Roy said this last issue but I kind of figured it was his New 52 douche personality flaring up. But Ollie says the same thing here. Unless it’s some weird thing where Ollie thinks she deserves a better name than Red Arrow, he can kindly go f*** himself with that motorcycle. I do love that Emi can break into the prison like it’s absolutely nothing; that’s pretty bad ass.

Speaking of, where is Roy? Did he really just bounce in between issues? That seems like a dick move considering Ollie’s in jail and the city is almost literally falling apart. Maybe something came up with the Titans.

This is somewhat of a transitional issue. Percy needs to get us from the last issue into the new one of Oliver traveling across the DC Universe. It’s part epilogue and part prologue. Because of this, it’s not the most interesting issue ever. It feels like the start of something but it’s a little dry on its own. There’s also a lot of exposition which is tough for me but excellent for new readers looking to jump on.

This is an okay issue. There’s a lot of solid material. The art is great and the book has a somber tone that fits the aftermath well. I like certain story elements and what Percy is setting up but it’s hard to get too invested without context. However, I do think this is a good issue for new readers. If you haven’t been reading Green Arrow but are interested, this is a great issue to start and I highly recommend reading it because it’s a good place to jump on. However, if you have been reading, it feels a little slow on it’s own and I would recommend waiting for the trade.