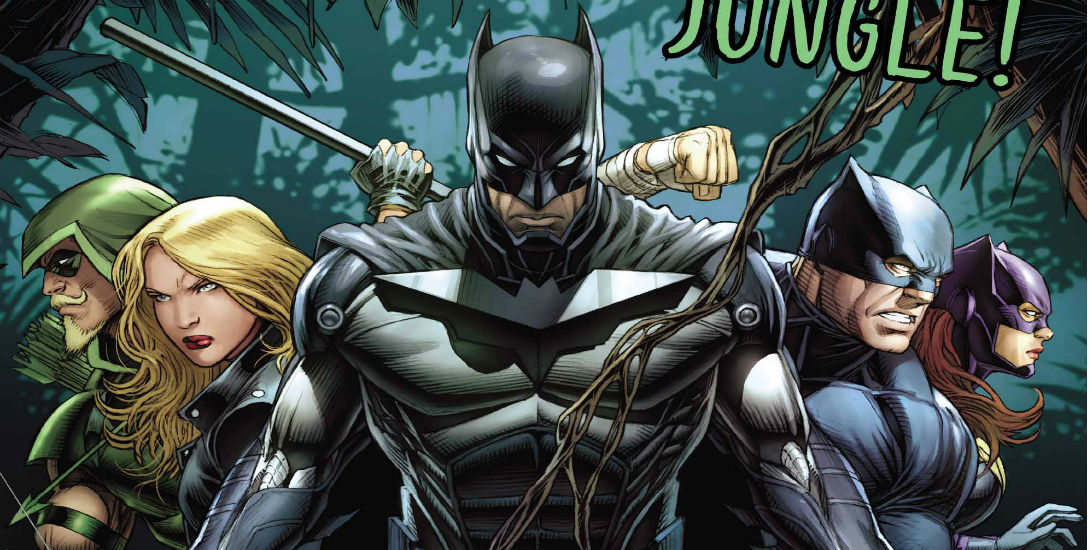 Character has completely overtaken this title and become so important, that it effectively calls into question Batman’s motivations and gives credence to the heroes who have joined Ra’s al Ghul’s side.  No, really….

Batman and Black Lightning leave Aqualad and Steel (Natasha Irons) to guard the Presidential Inauguration fearing an attack from Ra’s.  Batman and Black Lightning join the rest of the team on the mission to the South American rain forest under Batgirl’s leadership.  Plastic Man and son wrap themselves around Babs to provide security and safety as she descends to the forest floor where the signal on Connor Queen was lost.

In Ra’s’ camp, Animal Man explains to Damian why he joined Ra’s’ side.  And it’s very compelling.  Interspersed with this narrative is Batman infiltrating and getting closer.  Ra’s and the alternate universe Batman know he’s there.

Animal Man’s explanation of his alliance with Ra’s is a compelling and insightful argument that casts the immediate versus the bigger picture.  Often, one is faced with a moral decision that places the lives of the few against the lives of the many.  One has to justify the deaths of a few to save the lives of many.  This has been Ra’s’ argument for years.  Batman, on the other hand, sees every life as precious.  While this issue asks the reader to consider the merits of Ra’s’ argument through the alliance of Buddy Baker, it should be clear that Bruce’s vision is not so short sighted.  There’s a cost to taking a life that Bruce understands.  The argument that letting the Joker lives makes Bruce complicit in the Joker’s future murders and other crimes is at the heart of Ra’s’ and Buddy’s reasoning.  While it is true that Bruce could prevent these future crimes, is it worth Bruce’s soul to kill the Joker?  Heady stuff for a comic book, eh?

This book also asks the question why is there not a Plastic Man book in regular DCU continuity.  Or, any continuity for that matter.

Some of the references to the ancillary characters may be obscure or go unnoticed, but this is minor.  It is also a positive when viewed from the other side…

By addressing serious and real issues, this comic elevates to a level rarely touched in the medium.  When one considers the morality of both sides of the issue, it’s clear that there is a real world analog.  While Batman may find a way to address both sides of the situation, in the real world, rarely does it work out that way.  This title has transformed from a pedestrian video game tie-in to a morality questioning piece of popular culture.