“The First Ally” finale! In the final issue of Scott Snyder’s high-octane run on ALL STAR BATMAN, he and superstar artist Rafael Albuquerque put Batman to the ultimate test! Faced with either losing his future as Batman or the person he loves most, the Dark Knight must decide which ultimate price he is willing to pay. 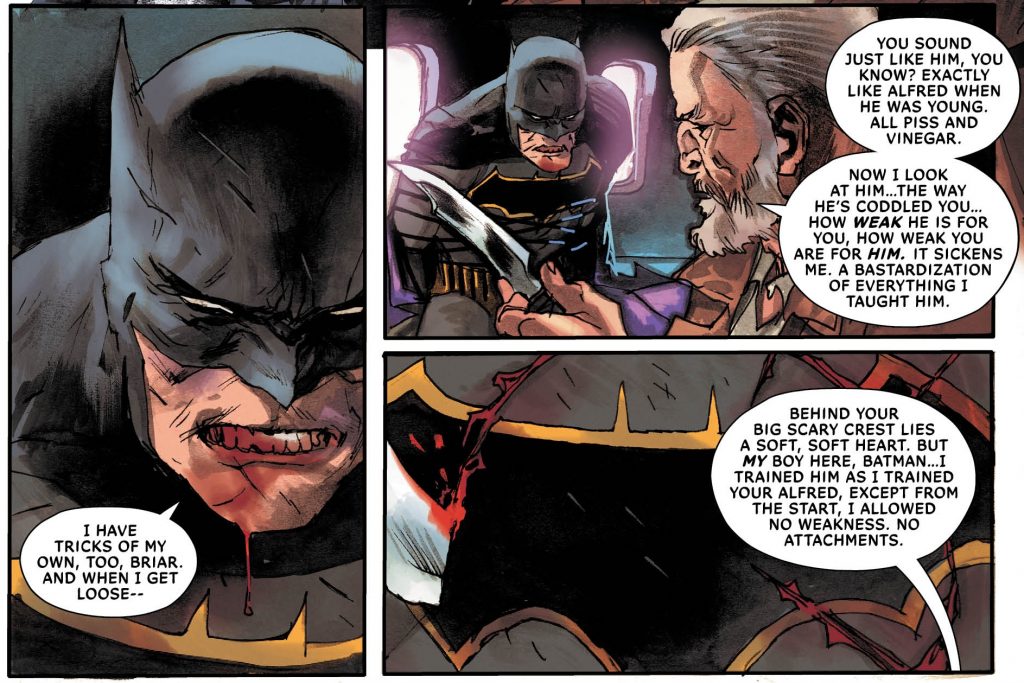 This is the first ongoing Rebirth title to reach its final issue. It speaks to the success of the Rebirth line that the conclusion of the title is not due to cancellation, but due to the book’s principal creator deciding to finish the story and move on to new projects.

“The First Ally” storyline comes to a close, and it seems clear that the title refers to Batman’s first Ally, Alfred Pennyworth. The story has a recurring theme of fathers and sons – whether they be fathers by blood or replacement father figures. Alfred relates his distant relationship with his absent father and finding a substitute in Briar and later he becomes a father figure to Bruce, after he has lost his parents.

And in keeping with this theme, Alfred discovers that he is “father” to Nemesis in a genetic sense, who has found a father figure in Briar. This is a surprising turn of events that could have further repercussions for Alfred and Bruce, given that Nemesis is still at large at the end of the story.

I also like how Alfred’s love of fantastical pirate stories ties in with the life that Bruce leads, full of “caves and flying ships and magic cars.” We even catch a glimpse of young Bruce decked out in a child’s Zorro costume, as he meets his future mentor for the first time.

Also, I think the revelation that Alfred had been trained to be a Batman-like crime fighter explains a number of things, such as how a butler managed to accumulate the number of skills he’s had to use as Batman’s helper. Most importantly, it goes a long way towards explaining why Alfred would be a party to Bruce’s career as Batman and actively encourage it instead of doing his utmost to put a stop to it.

Also, this makes Alfred into Bruce’s main mentor and an active shaper of Bruce’s Batman persona. In previous versions, Bruce mainly had to leave Alfred to find those who could give him the training he needed, but now it is shown that the most important training came from Alfred.

The backup story wraps up Batman’s adventure in Russia, and dovetails into the main story, explaining how the Genesis Bomb came to arrive in Gotham. It also introduces Vik as a player in Gotham City called “The Killer Queen.” She has a bone to pick with the Falcone family, which leaves a thread that could be picked up by one of the writers of another Batman title.

Also, we get a priceless moment where Alfred cites the real world meme “Always be yourself. Unless you can be Batman.” 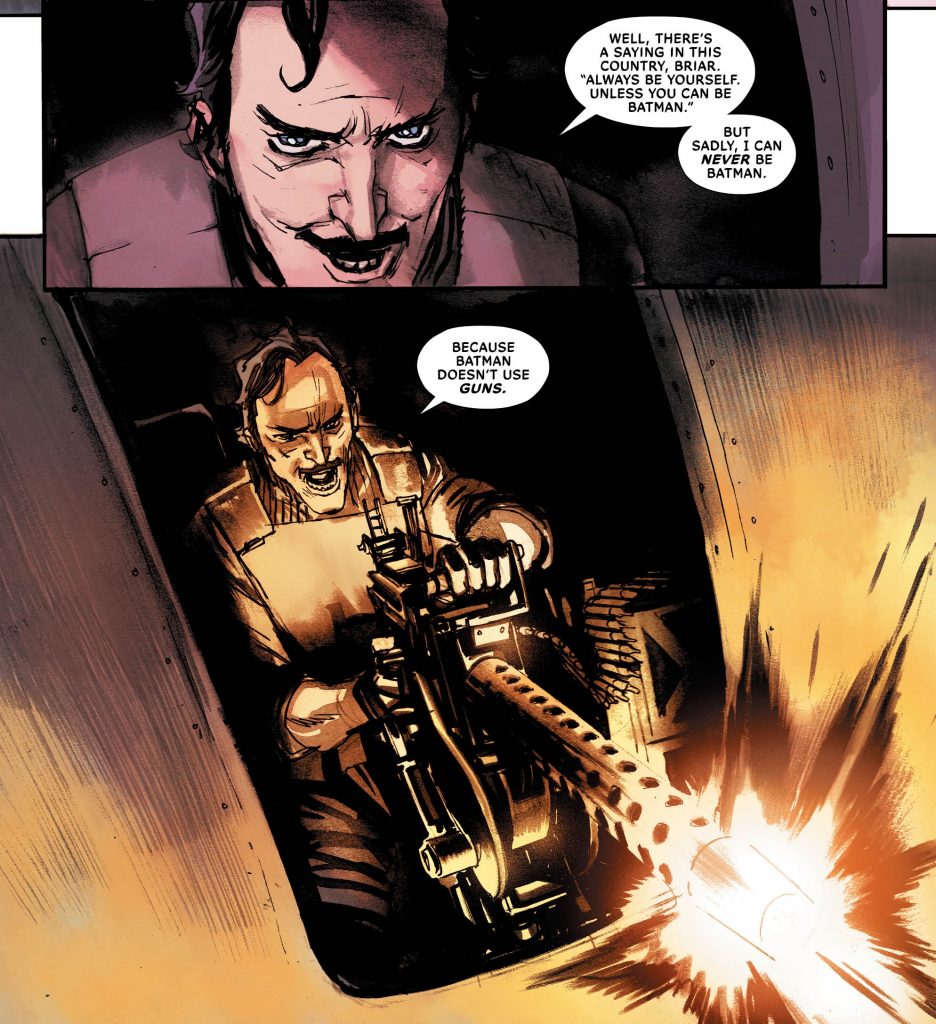 Overall, I think this backup story arc has been somewhat weak, as have been the backup stories in general for this series. However, it seems that the requirement for this installment to wrap the story up has fixed the slow-moving storyline, making this the most interesting chapter. Unfortunately, being the last chapter, it proves to be a case of “too little, too late.”

The backup story arcs in this series haven’t lived up to the standards set by the main story arcs. The Duke Thomas backups didn’t do much to make the character engaging, and the Russia mob storyline seemed to not show Batman as the brilliant fighter and genius tactician that he has proven himself to be. However, the main stories were more than worth the price of admission, which balances out the deficiencies of the backups. 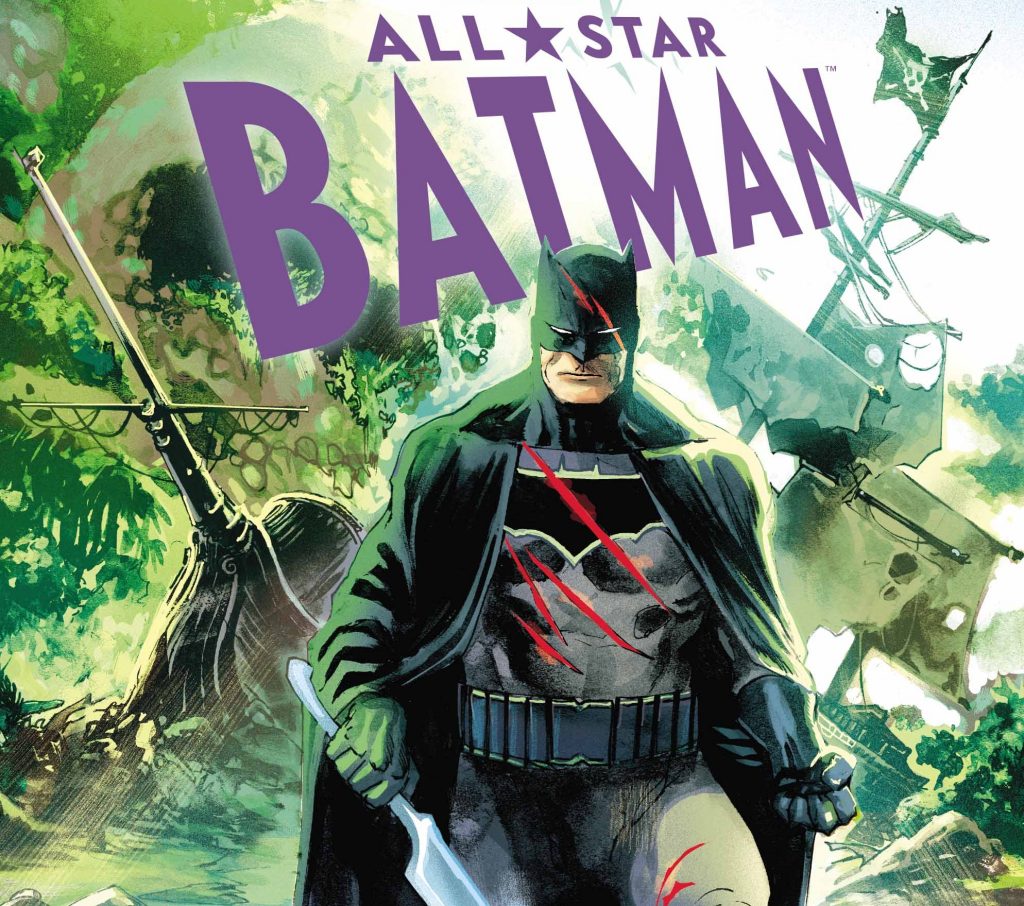 This series has given us a fresh look at some important figures in the Batman mythos, Two-Face and Alfred Pennyworth. In fact, this new redefinition of Alfred provides much more depth to the character without changing or contradicting anything we already knew about him. And it reaffirms a vitally important, but mostly overlooked fact that Alfred is Bruce’s father as much as Thomas Wayne was. And that by itself is enough to mark this as a truly great Batman story.