Roland Desmond A.K.A. Blockbuster gets paid a very unfortunate visit from the villain Raptor during his daytime business hours in his casino, after hearing word that Desmond has been helping Nightwing in his fight against crime in Bludhaven. Huntress isn’t too happy about this relationship either, finding out only after following up on Roland’s info and fighting the wrong group of masked thieves, The Whale’s Enders. Shawn Tsang attempts to reach out to Pigeon about the warning she received from Nightwing, instead she discovers Pigeon has made new alliances of her own. 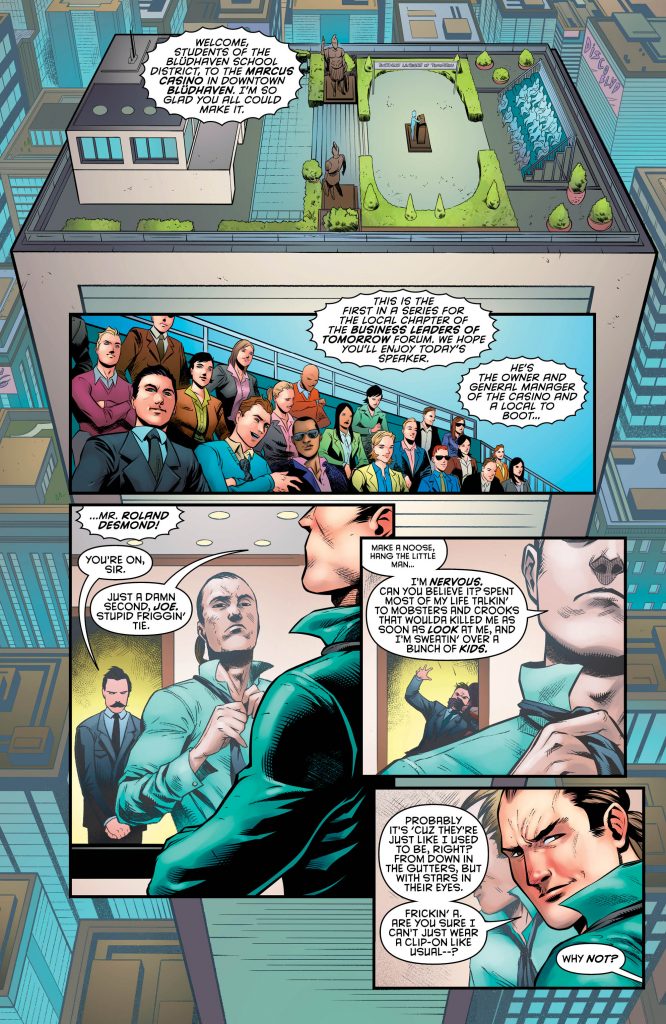 Pigeon and Raptor seem like a very lovely anti-capitalist, protest-loving miscreant couple and I sincerely hope both of them survive long enough to make a litter of rebellious bird/lizard themed children, if not actually manage to tear down the machine itself and liberate the world from the tyranny of monetary economies (which may not be the direction writer Tim Seeley is going for in his Nightwing series). 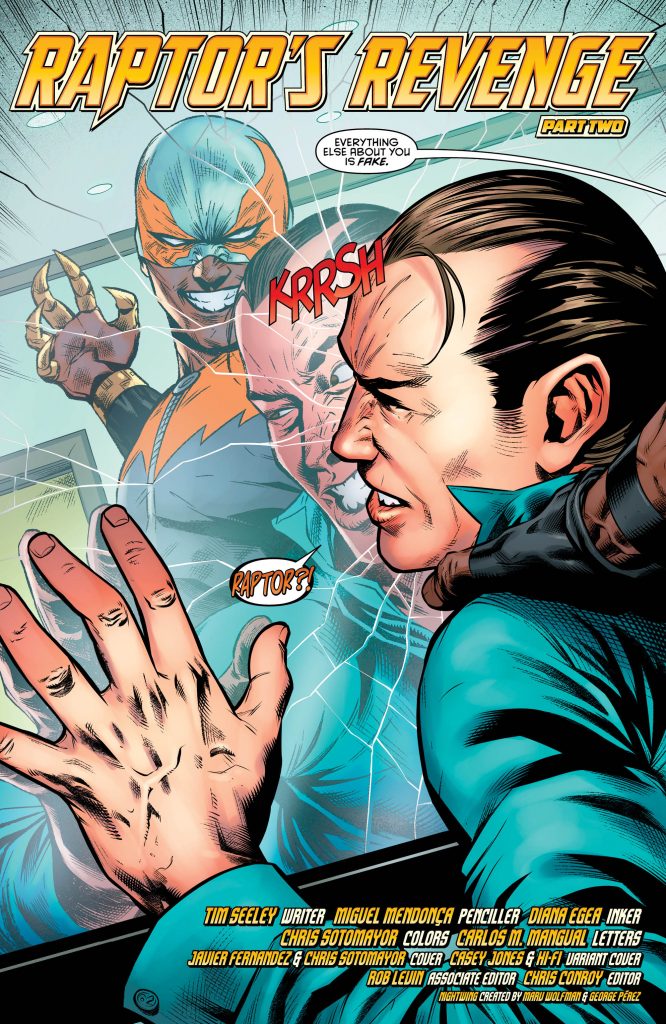 Raptor’s protest speech to the children at Desmond’s casino was interesting; if he wasn’t actively lynching a man in front of some kids then I might have been ready to rage against the machine with the guy. Maybe with time Pigeon could chill him out a little, even turn his passion towards statue-concentrated vandalism instead of public gallows.

The relationship between Desmond and Nightwing seemed a little difficult to swallow in terms of the complete absence of trust between the two, something that the Huntress picks up on in this issue and sharply reacts to. It’s a great illustration of how utterly diminished Huntress’ trust in Nightwing and his nonsense has become. It would have been very odd for a character like Helena (highly intelligent super-spy) to be content generously trusting the criminal classes of Bludhaven, especially not because Dick says it’s all good. 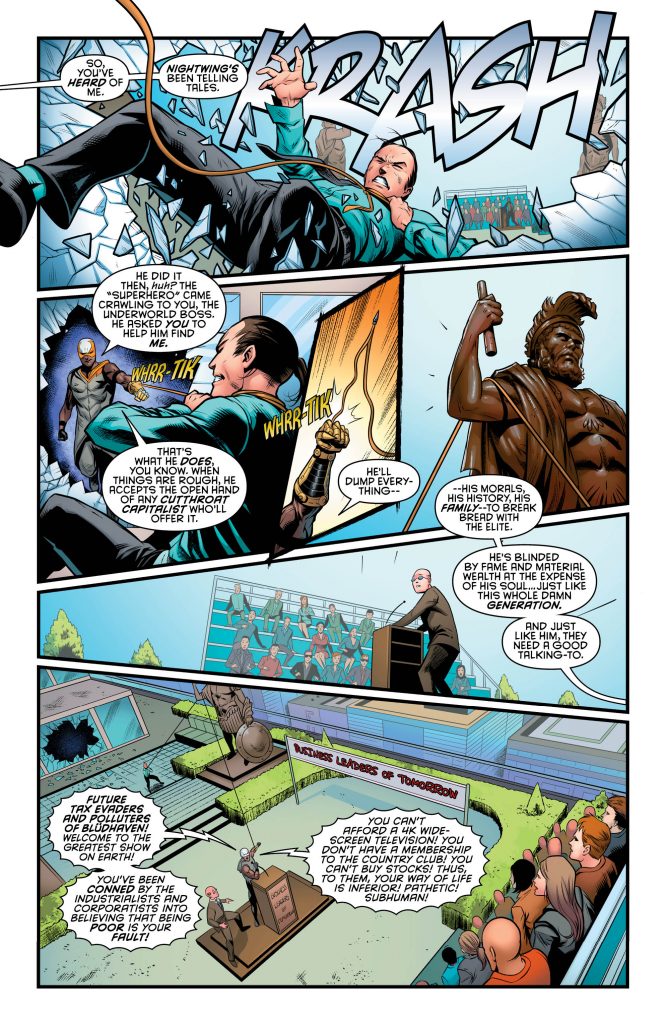 Dick seems to be making a habit of pushing away the women around him and while Huntress is probably pretty clever to avoid the infernal mess that is Dick’s love life for good; hopefully she doesn’t disappear completely from the remainder of the story arc.

I did not actually realize Huntress had left Nightwing, like properly dumped him, until Dick extrapolates that fact internally during the last few panels. This issue doesn’t spend a lot of time with Nightwing or Huntress and perhaps another couple of panels to flesh out their argument would have provided a clearer context (or I’m just not very perceptive today, also possible). 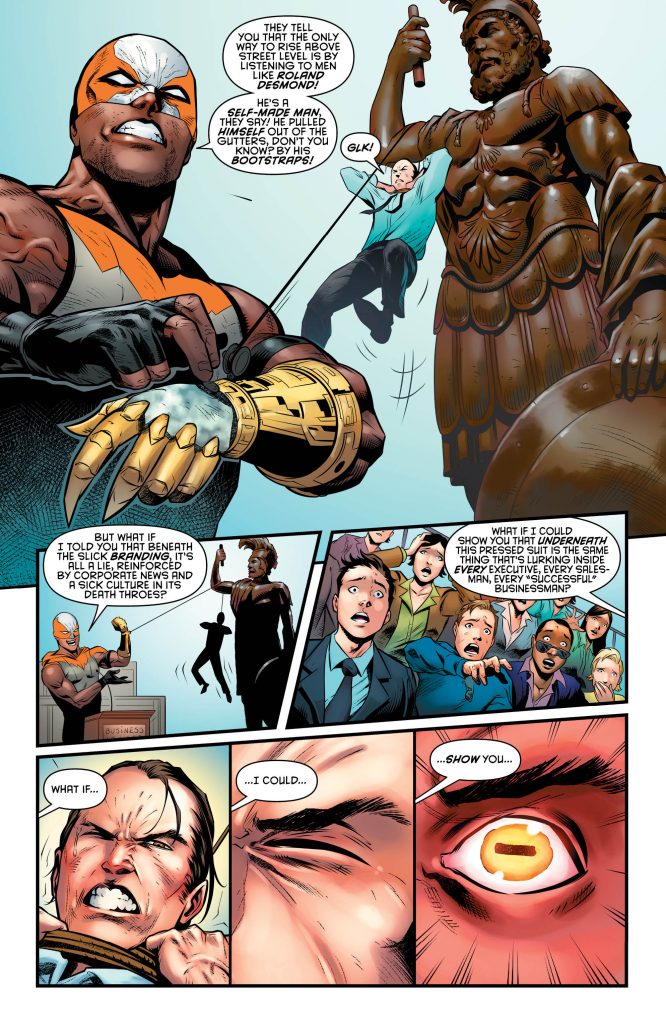 There isn’t a whole lot of development in this issue either, the major villain isn’t a huge part of this story and doesn’t come into contact with our heroes directly and the thugs they do fight aren’t particularly relevant to the unfolding story connecting Nightwing, Blockbuster, Raptor and the Run-Offs. The most important piece of information in this issue is what Shawn Tsang discovers about Raptor and Pigeon’s secret alliance, which you could have picked up on from his politically-charged sermon at the beginning of the issue which is very similar to Pigeon’s protest rhetoric. 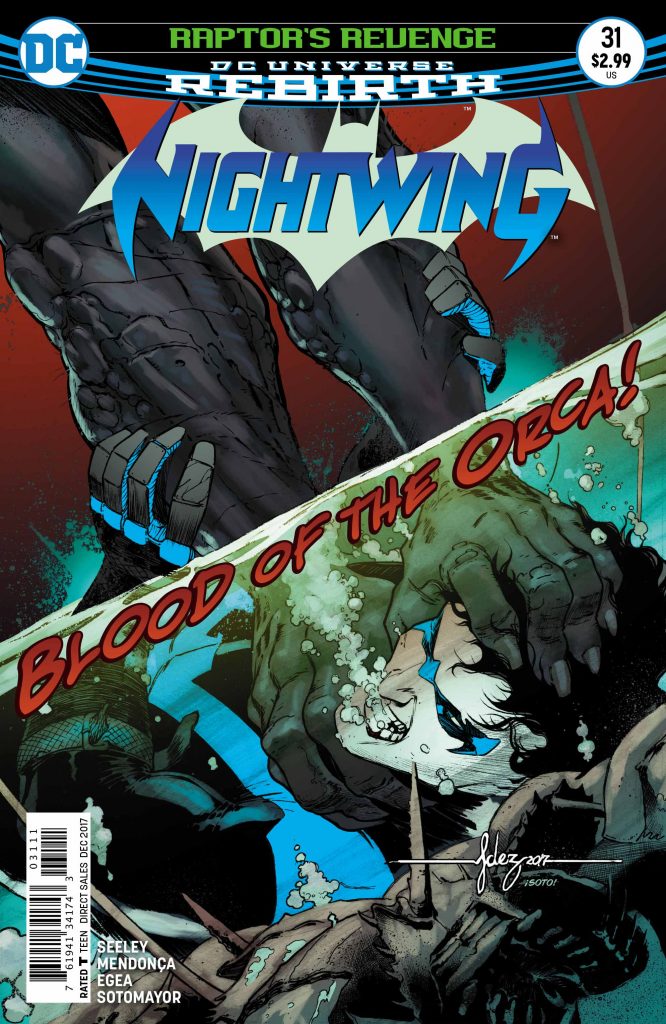 Spending more TLC on the most important characters in the Bludhaven right now, issue #31 Blood of the Orca” fleshes out the moral quandaries in effect here, establishes the relatively dire personal circumstances for Dick as well as Roland, and continues to explore the depths of the supporting characters of this arc.

Trick or Treat from The Dominators to DC’s Legends