While Barry is being treated to his bachelor party from the male members of Team Flash, a girls’ night out turns dangerous when Caitlin’s hiatus comes back to haunt her. 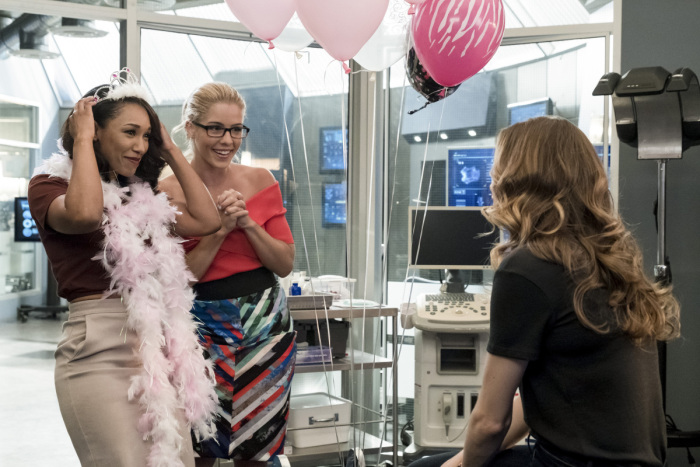 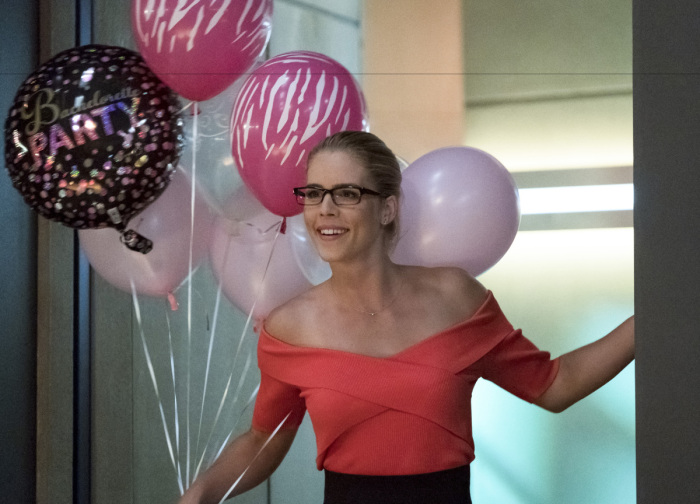 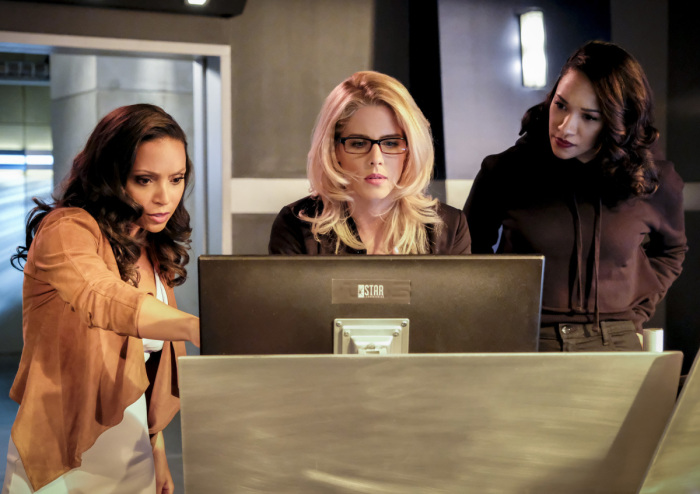 The guest spot of Emily Bett Rickards as Felicity Smoak was a good first nod to the viewer of the incoming levity of the episode, as well as Team Arrow’s official introduction to Ralph Dibny’s bizarre abilities and sense of humor. Seeing Ralph stretch his upper torso down the hall of the Speed Lab shows how much the creators of the series want to develop Elongated Man. Further, Ralph’s involvement in Barry’s bachelor party – uninvited, as the case may be – and his lecherous side revealed through choice of venue shows he hasn’t gone squeaky clean from last episode. This is a thankful realistic approach, whereas they could have gone the aforementioned route and had fans scratching their heads skeptically. Largely, Ralph’s journey to the hero he’s known as in the comics will be a gradual episodic subplot this season.

The focus was not so much on Barry this episode, as the focus was shifted on the female members of Team Flash plus one. As promised in the title, the guys too a backseat while the ladies got together to kick ass, complete with female writers and director. Girl power was enhanced moreso by two female antagonists: Caitlin’s alter-ego Killer Frost, and guest Sackhoff’s metal-wielding Amulet. In this episode we finally find out about what Cait was doing those months away from S.T.A.R. Labs and the exact nature of her relationship with Amulet. Through the girls’ night out, the team learned more about the exact nature of the split personality of Killer Frost. The characterization has altered slightly from last year, especially after her experience with Savitar. While still cold, Danielle portrays her as slightly more approachable, and that last scene with the unseen conversation with Team Flash the next day shows there’s been a bit of a merger between the two. The makeup also looks a little more grounded, and the eyes are only shimmering when ice effects are needed. I cracked up at Felicity’s Incredible Hulk crack – Universal or Marvel better not sue somebody – and how the team tries to deal with the potential powder keg in their midst that could go either way.

Speaking of loose cannons, Gustin got to show off more of his comedic abilities as a punch-drunk Barry in The Golden Booty scenes; every moment was a laugh-out-loud reaction, especially him weepily asking out of context questions (i.e. “Why couldn’t Rose make room for Jack on the door?”) and him announcing his secret identity to the complete disregard of all in attendance. While there is usually a balance between drama and comedy for the character, seeing Barry intoxicated showed hilarious layers. This was a change up given that Carlos usually shoulders most of the funny moments per episode. 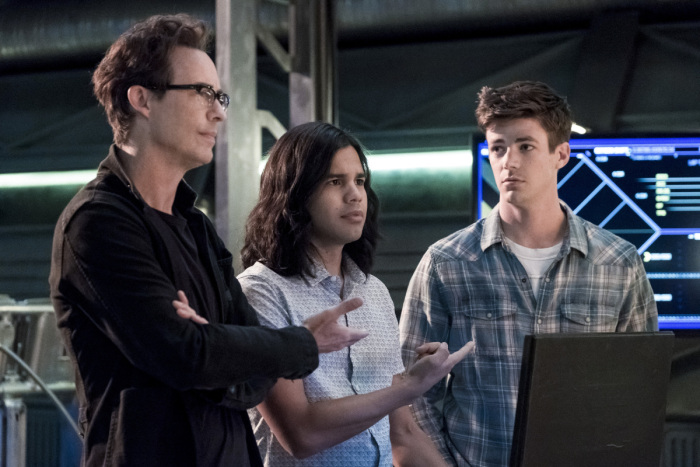 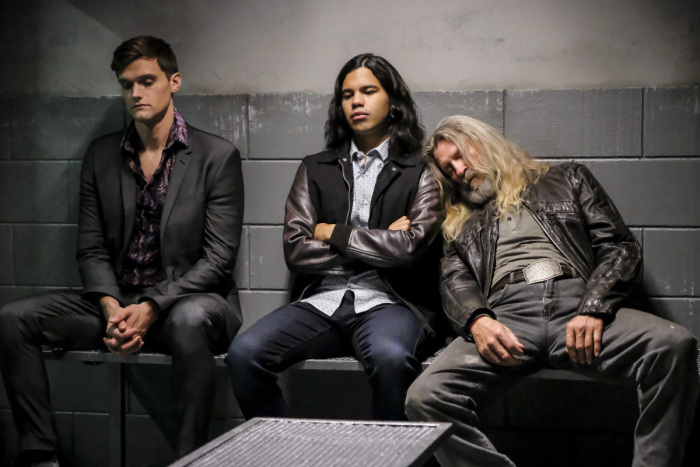 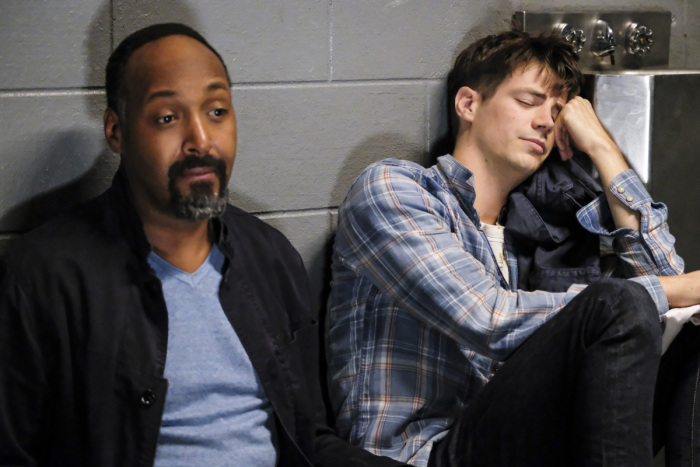 I didn’t really buy Sackhoff’s accent. I know they threw that in to both enhance her femme fatale performance and distance her from her sci-fi protagonist past, but it was unnecessary. The characterization of Amulet was enough without it. The idea of The Weeper’s tears used as a hallucinogen seemed like a mundane threat with very few applications. Seeing Iris step up and reach out to Killer Frost although she and Caitlin Snow were only “work friends” was good, but why was Felicity not involved? I always felt that these two brainy babes were closer. Emily felt a bit underused in this episode, I find, and her arc involving Oliver and Team Arrow seemed too important to just shove under the rug. The wild side of Cecile’s daughter seemed shoehorned in for levity, and Joe’s mixed feelings about being a father for the third time and the heart-to-heart with a sobered Barry could have been reserved for later.

Although Harry seemed to take a little bit of a backseat in this episode, there is a noticeable plothole. Given that Harrison Wells is a deceased confessed murderer on Earth-1, how can he stroll in to the CCPD and post bail for the guys without an eyebrow raised? At least H.R. had an image inducer to disguise his facial features. And with what money? Surely his currency is different on Earth-2. As for The Thinker, his last-minute appearance could have been reserved for the prologue of the next episode; the writers have already gotten across the notion of him being this season’s puppeteer villain. There’s no need for him to be in every show 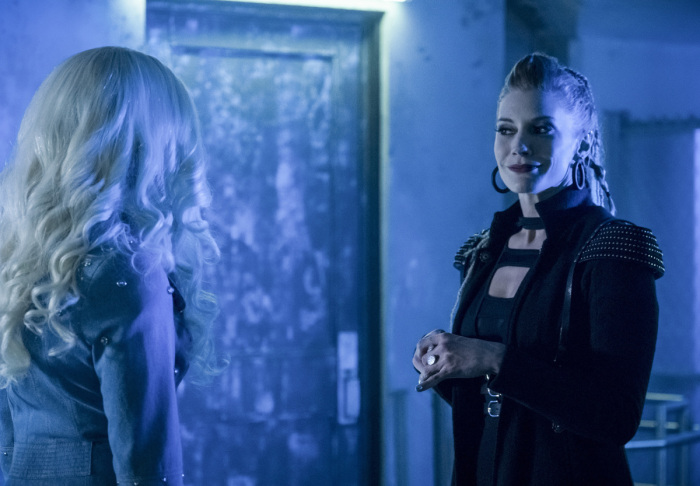 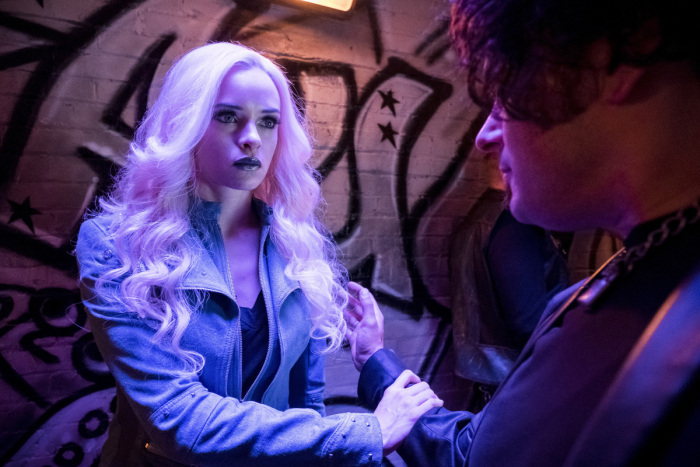 While good character development with key characters, major power players like Felicity were ignored. This is a merciful 4 out of 5 largely because the character growth of the Frost-Snow dynamic as a point of interest and the hilarity of the bachelor party and Grant flexing his comedic chops. Plus seeing a girl-centered episode of a predominantly male-centered show was a good change of pace