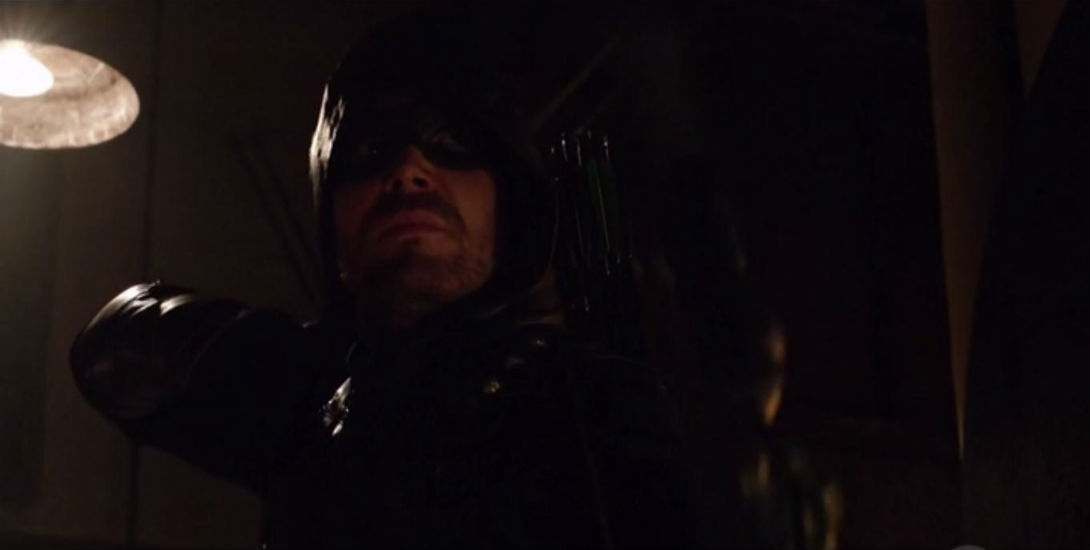 Oliver Queen’s celebration of Thanksgiving is short lived when he gets arrested by the FBI, while Cayden James and Black Siren are out stealing some dangerous technology.

Where to start? There is a lot that happened in this episode! It is definitely stuffed (Pun intended). So first, Oliver is arrested, which is a good thing; not that he is arrested, but because we saw some story progression. This is what I’ve been praising; I think I mentioned this on my two previous reviews. But my only question is who gave her the tip that connected Oliver to the Green Arrow?

My next positive point is when Cayden and Earth-2 Laurel went out and stole some weird high tech stuff to create a powerful bomb. Although the bomb was never used for this episode, and was in fact a decoy, I am hoping that one of these days it will be revealed that Cayden did actually make this bomb. This device could then play a huge role in the back half of the season. And if Cayden does actually use this bomb, I believe Star City will turn into a war zone, with the police force being crippled and there being no choice but to let the vigilantes of the city help.

Another great point for this episode is the side story of Diggle trying to cure his tremors. For seven episodes, we have seen John struggle with his injury and it has cost him dearly. I’m not only talking about physical injuries, I’m also including the trust that has also been tarnished. Now, on this episode, we see Diggle and Curtis trying to cure him by injecting him with a prototype of the same chip Felicity has on her spine. At first it seems successful but when the team went out on a mission, Diggle was seriously beaten and Laurel and their goons got away. It was then revealed that Diggle’s situation worsened. There had been some reaction with the steroids John is taking and it mixed with the prototype chip Curtis injected into him. If this continues, John may experience full body paralysis.

This situation even escalated when Oliver came to see Diggle. The two had an argument about Diggle taking on the mantle as Green Arrow for Oliver’s sake. He even placed Ollie’s family above his, just to be a good friend. But in Oliver’s point of view, he wouldn’t have placed John in that situation if he had known his situation. Eventually, the two reconciled and John even shared something he was keeping ever since they were on The Dominator’s ship, back in the season 5 crossover episode. He said to Oliver, after experiencing being the Green Arrow in the hallucination pod, he was secretly wanting to be the Green Arrow and when Oliver asked him to take over for him, that’s why he said yes. I was thinking and even can’t help to formulate, somehow this is a foreshadowing on John’s son, John Jr. That he will someday take up the mantle or in this case the bow as the Emerald Archer, as seen in the future Star City from 2046.

Also, one great thing happened for this episode that Arrow fans will really be thankful of. Thea is now back! She is conscious. In the final moments of the episode, Thea woke up and it is really a good thing. Why? Ollie really needs Thea at this moment. For the past few seasons we got to see the chemistry between the two as siblings and when things got tough, they relied on each other. And as of this moment, Oliver needs Thea because he is going to face trial with charges of vigilantism.

Also, in the first part of the episode, we get to see one side of Oliver, being a socialist. He arranged a Thanksgiving food drive for the needy. It is a good and even a positive side because for almost every episode, we see Oliver not meddling with politics, except last season. In the comics, Oliver is fighting not just for justice but specifically for social justice and on this episode he shows it by arranging a food drive to help those in need. Hopefully this is not the last time we see him in this light, fighting against social injustices. *Note* Behind is the new Star City Metro Police Station! YAY!

We also saw a wonderful performance by Michael Emerson as Cayden James. He is a compelling and mysterious villain. It intrigues me and I want to see what his next move is. Although his lines may seem dull, Emerson’s performance was great. Hopefully we get more scenes from Michael Emerson to let him shine.

Lastly, this episode is not complete without some Thanksgiving references because it’s Thanksgiving and it is also the title of the episode. Mind you, there is a ton of it! We have Felicity saying to the team when engaging with the enemies, “You have four turkeys in the entrance and five move stuffed in on the floor. All puns intended.” Then we have Rene who is really one genius dude. When Curtis, Felicity and Rene were waiting on where Cayden would place the bomb, Felicity asked if they should order a traditional Thanksgiving meal, then Curtis adds that he can call Big Belly Burger and Rene said the best line ever, “I would crush my French Fries and pretend that it’s mashed potatoes.” My Man! Also following this, Rene realizes that there would be a Billy Joel concert and this is a possible target for Cayden’s bomb. Oliver says that he is going to try and shut it down while Rene follows up by saying, “I wanted to see Billy Joel.”

Even though this episode is as awesome as ever, we can’t help but look at the negative things as well. First off, Cayden revealed the reason why he despises the Green Arrow. Apparently, Oliver had something to do with his son’s disappearance. Somehow, it feels cringe-y at this moment and at the same time it’s already cliché. For last season, Adrian Chase’s motivation as to why he was making Oliver’s life miserable was because Oliver killed his father way back when he was still The Hood. Adrian then trained himself and created Prometheus for him to destroy Oliver’s life. Now, for this season, I’m sensing a similar motivation with Cayden James. Hopefully the writers will bring something new to the table, not just wanting revenge and seeing him breakdown. Also, why don’t the writers bring one of Green Arrow’s villains like Onomatopoeia. He can be a compelling villain.

One other negative point for this episode is how Thea came back to the conscious world. Felicity explained that there was a certain chemical that was given to her and it reacted perfectly which is why she is now out from her coma. I was hoping that her waking up would be a great moment. Somehow, it feels anti-climactic. I was hoping that Oliver would be really down; ready to go all the way down to brooding, then Thea would wake up. It sounds cliché but in my perspective it would be one heck of an episode. Like how they revealed who Prometheus was. It was shocking and satisfying.

As I said, this episode is stuffed! There are things that have been resolved but problems rose. That can’t be helped but we know that Oliver and the team will make it through because they are family. This episode let us see the importance of family and that we should be thankful of having them. Next week: Crisis on Earth X! BOOYAH!