Are Booster Gold and Blue Beetle being prepared for their primetime debut?

They are DC Comics contemporary Dynamic Duo and fans can’t wait for their live-action debut, but were Booster Gold and Blue Beetle about to crossover into the Arrowverse when everything went wrong?

When the pairing of Booster Gold and Blue Beetle were introduced at the onset relaunch of the Justice League in the late 1980s, DC Comics couldn’t have been prepared for fans reaction to this titanic team-up. The two were relatively new additions to the mainstream continuity. Following the cataclysmic events of the Crisis on Infinite Earths maxi-series, many of the one-time Charlton Comics characters were absorbed and re-introduced into the new DC Universe continuity.

Among the first heroes to emerge as a contender was the Blue Beetle, who as industrialist and inventor Ted Kord lead a double-life as an equally quick-footed, quick-witted crime fighter who used technological gadgets to fight crime while working out of his giant, flying beetle-shaped hover craft. The Charlton Comics characters which included Captain Atom, The Question, Nightshade among others served as the template for the assembled heroes in Watchmen.

Another new hero introduced at the time was the time-tripping Booster Gold, who seems more in step with our modern age of hyper-commercialism and social networking! The self-styled superhero traveled back in time using stolen technology to insert himself in the Modern Age of Heroes. Booster Gold has since established a very intricate mythology and a legacy that is even impacting the current “Rebirth” storyline which followed the reinstatement of the multiverse. 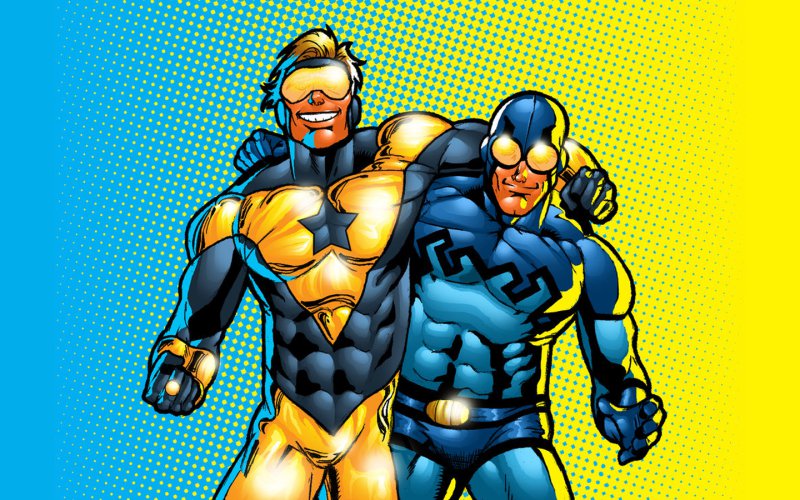 Both heroes were inducted in the Justice League after Darkseid attempted to dismantle and discredit the heroic legends. His efforts were stopped and a new league was formed of mostly untested neophytes under the watching eye of Batman and Martian Manhunter. Both Booster and Beetle would remain a constant presence as this version of the Justice League evolved, quickly becoming inseparable allies and friends both on the field, and in their private lives.

The characters have often been mentioned among the creative team responsible for the current primetime DC Comics universe that is itself expanding on The CW network. Arrow executive producer Marc Guggenheim has teased that the duo could eventually appear in some way on one of the shows, in fact at one time Blue Beetle had been considered as a supporting cast member, but the show-runners decided to go in a very different direction.

“Originally Ray Palmer, who was introduced on Arrow,” said Guggenheim, “he was supposed to be Ted Kord and we went another way.” Ray Palmer who is played by Brandon Routh went on to fight crime appearing on Arrow as The Atom before boarding the Waverider and joining the team on DC’s Legends of Tomorrow. On that series the original group is brought together by Rip Hunter who has ties in the comics to Booster Gold.

Though Guggenheim hasn’t been able to reveal anymore about whether this season of any of the DC inspired series will finally bring Booster Gold and Blue Beetle into the lineup, it is critical to note that Kord Industries has been discussed on Arrow making it relevant to the people on Earth-1. With  a recent crossover spectacle that united over 25 heroes to battle their evil Nazi parallel-earth doppelgängers anything is possible in primetime, and Beetle and Gold may soon have their day!

The Rock Shows His DC Allegiance By Calling Out The Avengers