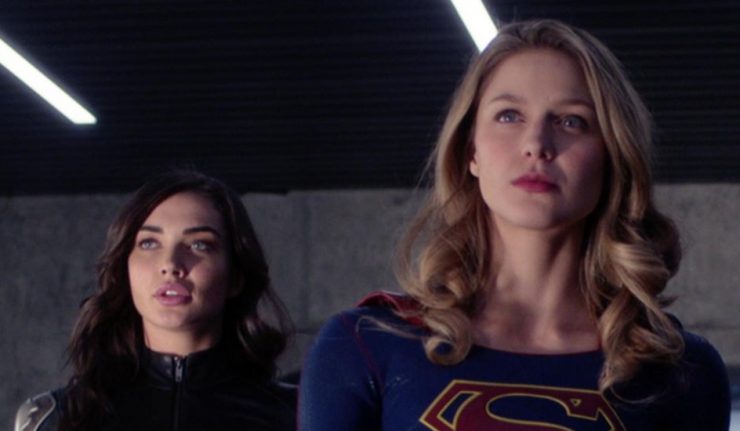 Conceptually, I think this episode is brilliant. A lot of the ideas here are clever and potentially fun. I love Supergirl being forced into a situation without powers to the point that she has to rely on others. Combining that with a Suicide Squad concept of a team of villains sounds fun. Livewire and Psi are good picks for this as well.

I’m still not in love with the split personality aspect of Reign, but this episode takes it to a more interesting place. By the end of the episode, Sam starts to realize that she is losing time and blacking out. She is spending so much time as Reign that she is now failing her obligations to L-Corp. The vibe I got is that writers are playing Reign as a kind of addiction; it is starting to remind me of the black suit Spider-Man material. I’m curious if the writers are going to take that further.

This episode feels like a missed opportunity. The ideas are here and solid, but the execution is kind of disappointing. The team has to go to Fort Rozz; everyone there hates Supergirl because her mother imprisoned them there. This is an incredibly dangerous mission; they are looking for a specific person, a priestess, without any knowledge of her whereabouts on the ship. But they only end up fighting one prisoner who is defeated fairly easily, and this prisoner tells them exactly where the priestess is. This could have been an insane episode, but it’s fairly dull. Instead of the prisoners, they use a solar flare and Reign as the main conflicts. These are fine elements, but they take a lot of time away from the interesting concepts.

Another missed opportunity is the team itself. I love the idea of Supergirl and Saturn Girl having to team up with villains; that sounds neat, but there isn’t really any conflict. There’s a tiny bit of bickering but that’s about it. They act more like high school frenemies than adults with morally conflicting ideologies. There is one conversation about whether or not Reign should be killed and that’s all we get.

I have a better understanding of people’s complaint about Canto Bight in The Last Jedi after this episode. But while that plot at least played thematically into the overall story of that movie, this episode doesn’t even have that. Nothing is accomplished. Supergirl goes on this mission to learn information that the audience already has. I can see small elements playing a role in future episodes, such as Psi’s ability to take on Reign, but this episode does feel like filler. I also don’t like being ahead of our protagonist like that. For me, the story is more compelling when I’m inside the character’s head and finding out information when she does instead of waiting for her to play catch up. There are exceptions to this, usually in terms of building suspense, but it makes it harder to connect.

This is the major spoiler but a character dies and it doesn’t really connect. I want the CW shows to stop relying on killing characters for easy drama because death means nothing in this universe. There isn’t any sense of loss anymore. While Supergirl isn’t as guilty of this as Arrow is, it still feels pointless to kill people. I guarantee we will see this character again. Between time travel, flashbacks, alternate Earths and several means of literal resurrection, how does death have any meaning or significance?

This is an okay episode. It’s more disappointing than it is bad. I love the concept and there are good scenes, but it doesn’t go far enough with its ideas. Outside of small moments, nothing is advanced. This is a 23 episode season; there can be episodes of filler that stand alone and still be great. But this isn’t supposed to be a filler episode. “Fort Rozz” is very plot focused; it is clearly intended to be part of the greater whole, but it doesn’t move forward. It just repeats.