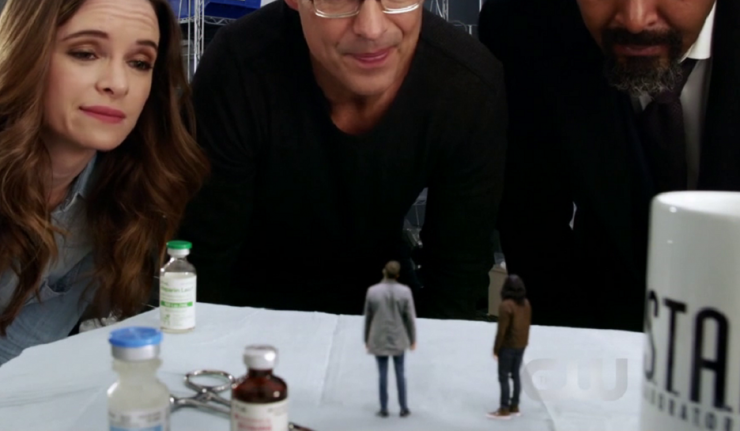 Barry’s attempts to help Big Sir’s case leads Team Flash to a metahuman who can shrink anything he touches, while Cecile mysterious gains telepathic abilities.

While on the surface it appears to be a filler episode, the writers are trying to establish a parallel between Team Flash attempting to manage things while trying to find proof of Barry’s innocence, set against Barry’s attempts to affect change behind bars. Big Sir, played by Bill Goldberg, carries that Morgan Freeman feel from The Shawshank Redemption, which makes the mentioned allusion moot only to those who saw the movie. But the fact that he’s a man that was indeed a thief, but one framed for murder offers a commonality between he and Barry’s situation. Further, it seems the writers took a lot from that original story to craft both Big Sir’s subplot and the twist ending. That movie was about holding out hope even in an environment when hope can be dangerous. While rash, Barry’s decision to give Big Sir that resolution in spite of due process was still within his character. It also shows how truly fast Barry has become if he can pull off that escape with a dude of that size and be back before anyone noticed he was gone. Or so he thought, but we’ll get to that later.

That opening scene in prison with former Mayor Bellows was another fun way of making prison a very small world. But let’s get to the metahuman of the week, whom Cisco names Dwarfstar. I like how they tied his origin in to fellow Arrowverse hero Ray Palmer and how Felicity is involved in the investigation. Admittedly, that’s a really cool power to have with a lot of possibilities if you’re a collector. Still, not a fun power when you’re Cisco and Ralph. I’ve been waiting to see someone step on Ralph and do a gum-on-your-shoe gag. The high-pitched voices were a hilarious way of getting across the shrunken effect.

You also get some insight as to what is rattling around in Harry’s head. Wells sounds legitimately stressed as his focus has to be divided three ways: proving Barry’s innocence, stopping Dwarfstar, and making Cisco and Ralph big again only to make matters worse by rushing. It’s a moment of humility for Harry, who’s normally confident, bordering on arrogant. Cisco was right in the fact that getting out of his own way was the only solution to coming to the right strategy.

What I’m surprised at most of all is the twist at the end that they’ve done with Warden Wolfe, whose comic book counterpart a was morally ambiguous character in both Wally’s and Barry’s lives. But this episode makes him this show’s equivalent of Shawshank’s Warden Norton, pulling some underhanded things in his position of power to the point where he goes into full-on villain territory. Making him part of Amunet’s metahuman trafficking operation is an interesting twist. Before you hear her voice on the other end, you thought you would hear DeVoe or his wife on the other end. You never would have guessed it was that B-lister.

Cecile was the BIGGEST complaint in this episode. It shows that the writing team are reaching by making her a latent metahuman from the original particle accelerator explosion. Further, her use of her telepathic abilities without consent amongst the team needs a dose of intervention when it gets too far out of hand, but never comes. They have a lecherous guy with stretching powers that they hold over the coals when he gets out of line; why does Joe’s fiancée get a free pass? Is it the baby bump? And I’m getting sick of the psychologist gag. It was fine for the Barry/Iris marital difficulties, but it’s like they’re making her the family therapist. Who’s next? Cisco and Caitlin?

Further, forget consulting Felicity on Dwarfstar. Why aren’t Team Flash consulting her on figuring out how to prove Barry’s innocence? She’s supposed to be one of his best friends besides the brotherhood he has with Oliver. That opportunity is extremely underused. Name dropping doesn’t count. I’m used to things being light and funny, but Cecile struck me this week as a nuisance. Why couldn’t she find a reason to go over to the DeVoe residence and read their minds? Oh, right, too easy. She is one of the reasons why this episode feels like filler.

While important to the plot, I just couldn’t stand Cecile, and there should’ve been more small Ralph and Cisco scenes. Plus, why Amunet?