In the Retconn offices in Final Heaven, Cave Carson is held captive by Milkman Man and on another plane, Rita Farr is trapped in a passion play not of her own making.  While Cave has a very physical fight on his hands, Rita is engaged in a more spiritual war that if she loses threatens to wipe her from existence entirely as she finally begins to remember her own life while stuck in Retconn’s version of The Rita Farr Story. 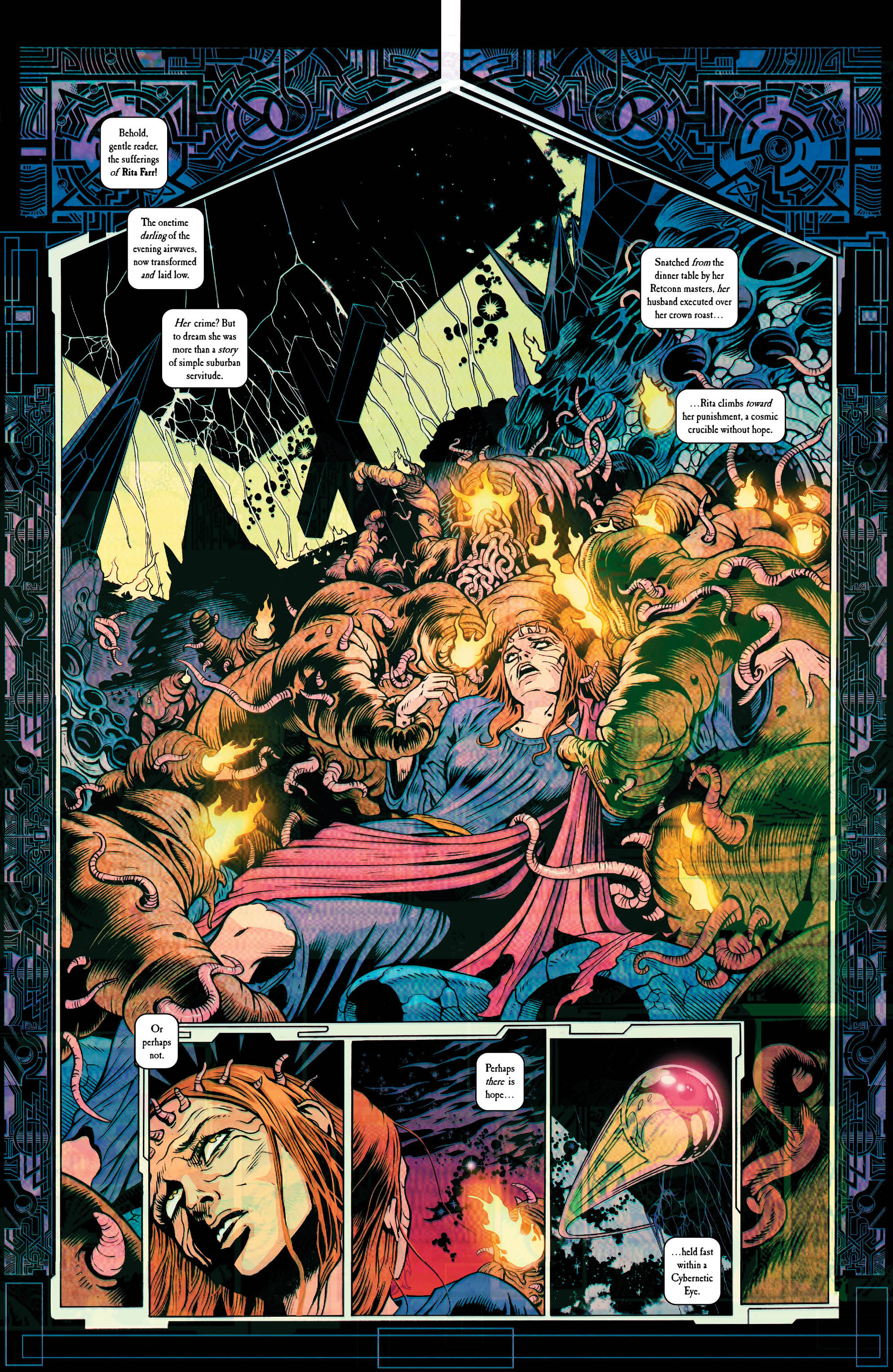 As Cave relates Superman’s message of hope to Milkman Man, Cave’s eye shows up with reinforcements- the Doom Patrol, Shade the Changing Girl and the Justice League of America.  Milkman Man breaks out his own back up to really rock Retconn.  Of course, in the main office, the negotiations between Retconn and Magna Khan go on, as Retconn still believes it can sell Prime Earth.  As the fighting gets closer the negotiations get more intense.  As Retconn realizes that the JLA and Doom Patrol are a huge liability at this point, Prime Earth is offered “paid in full” if Magna Khan can do away with the teams.  However, Khan’s client backs out and the “no deal” forces the ultimate fail safe for Retconn – destruction of everything. 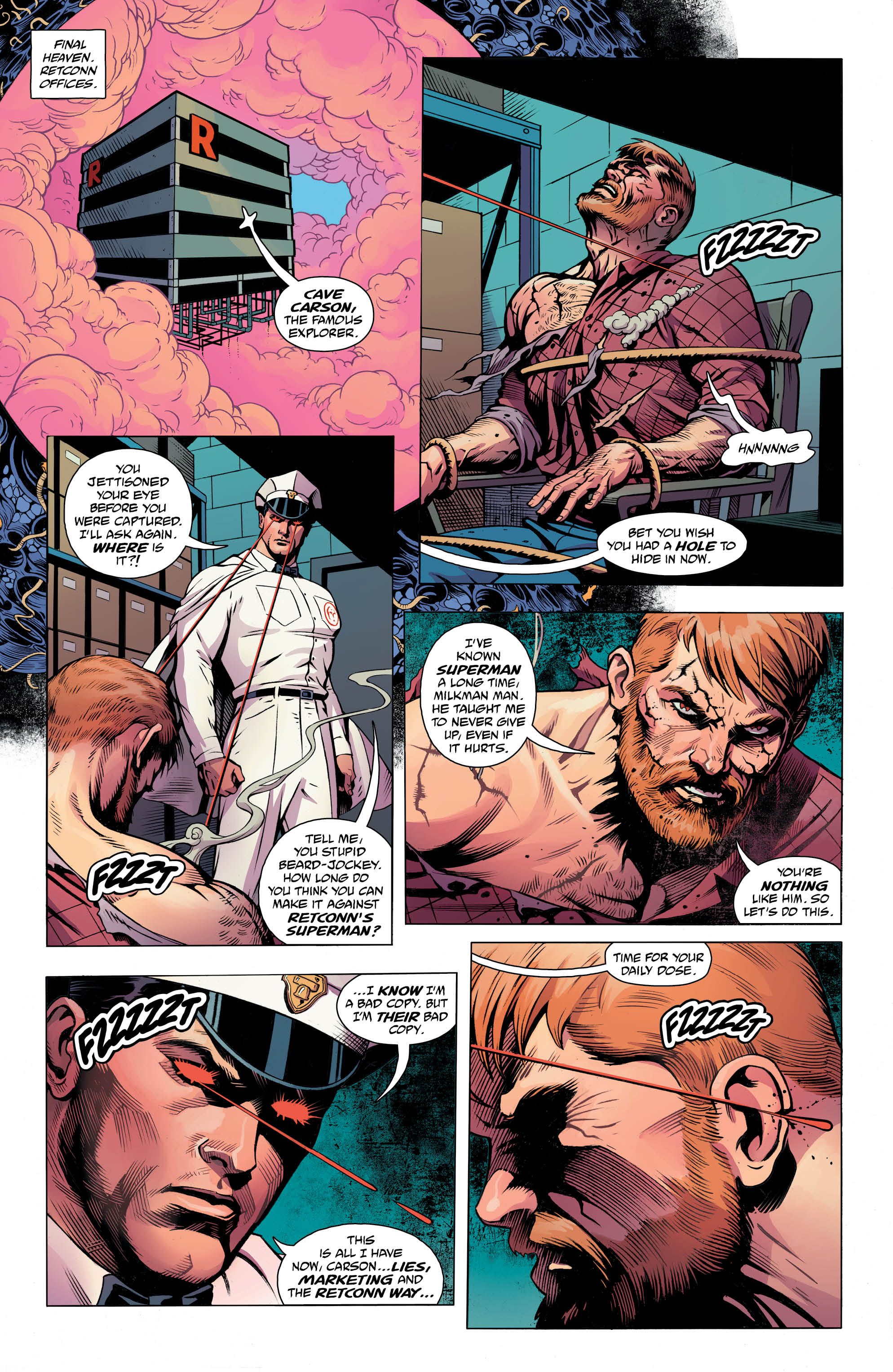 Batman, ever the strategist, figures one of Flex Mentallo’s stranger powers will be the solution, and along with Rita Farr’s realization that her stretching ability will allow her to stretch into everything.  As Retconn attempts to reboot Prime Earth, the heroes realize that this restart may eliminate any Retconn copies.  The biggest concern is for Cliff Steele who has been reminded by Retconn that he’s a copy of the original Robotman, Robert Crane!  (See Star-Spangled Comics #7, and All-Star Squadron for more.) 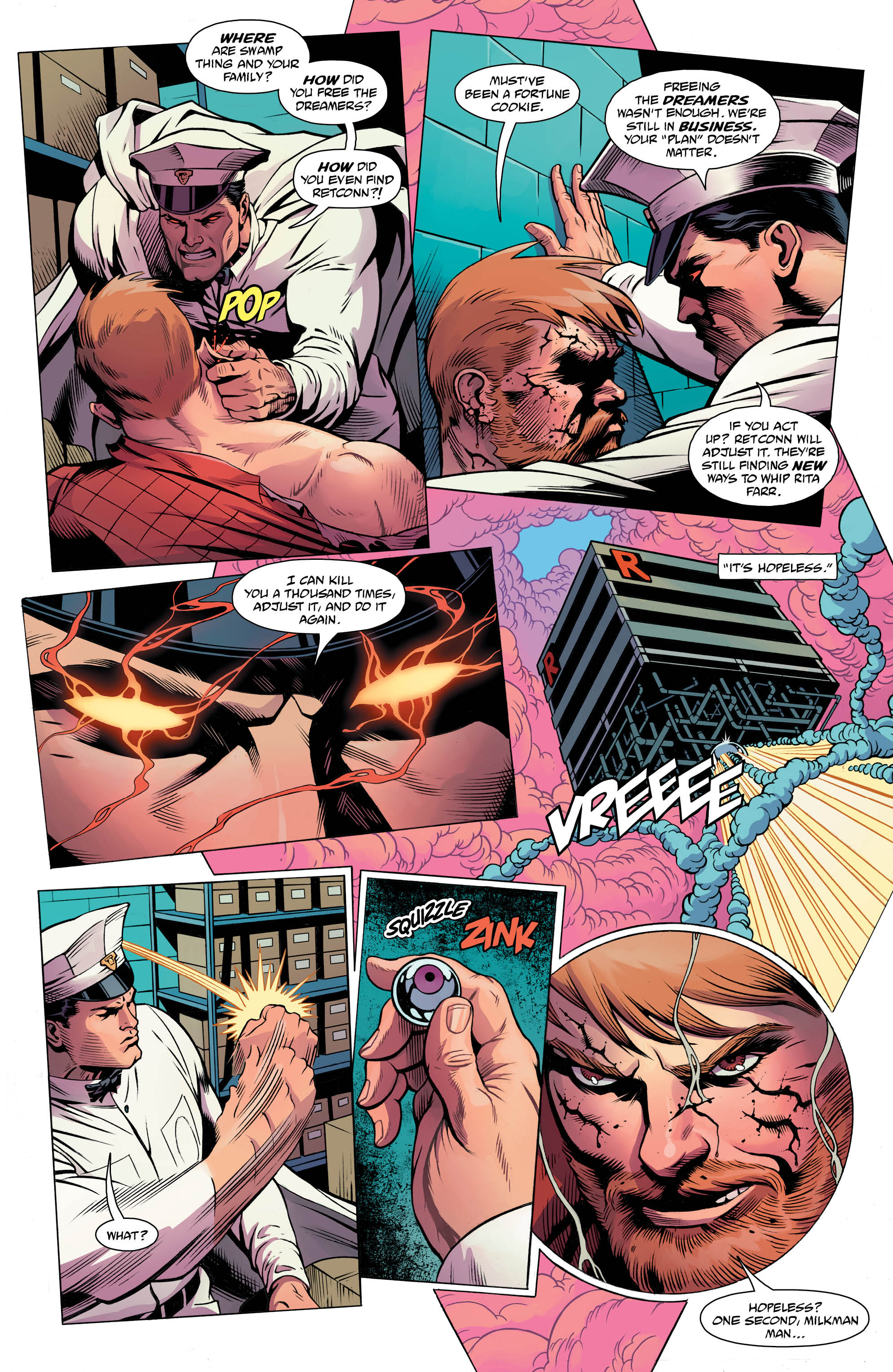 As the universe reforms without any of Retconn’s copies, there is a new status quo for the Young Animal titles which will all be explored in re-launched titles in the near future.

What’s really clever is that elements in this crossover manage to play off aspects of some of the themes in the Young Animal titles.  Rita Farr’s story echoes Shade’s experience with the “Life With Honey” TV show from her own series, and Cave Carson’s history with Superman proves pivotal in his fight against Milkman Man. 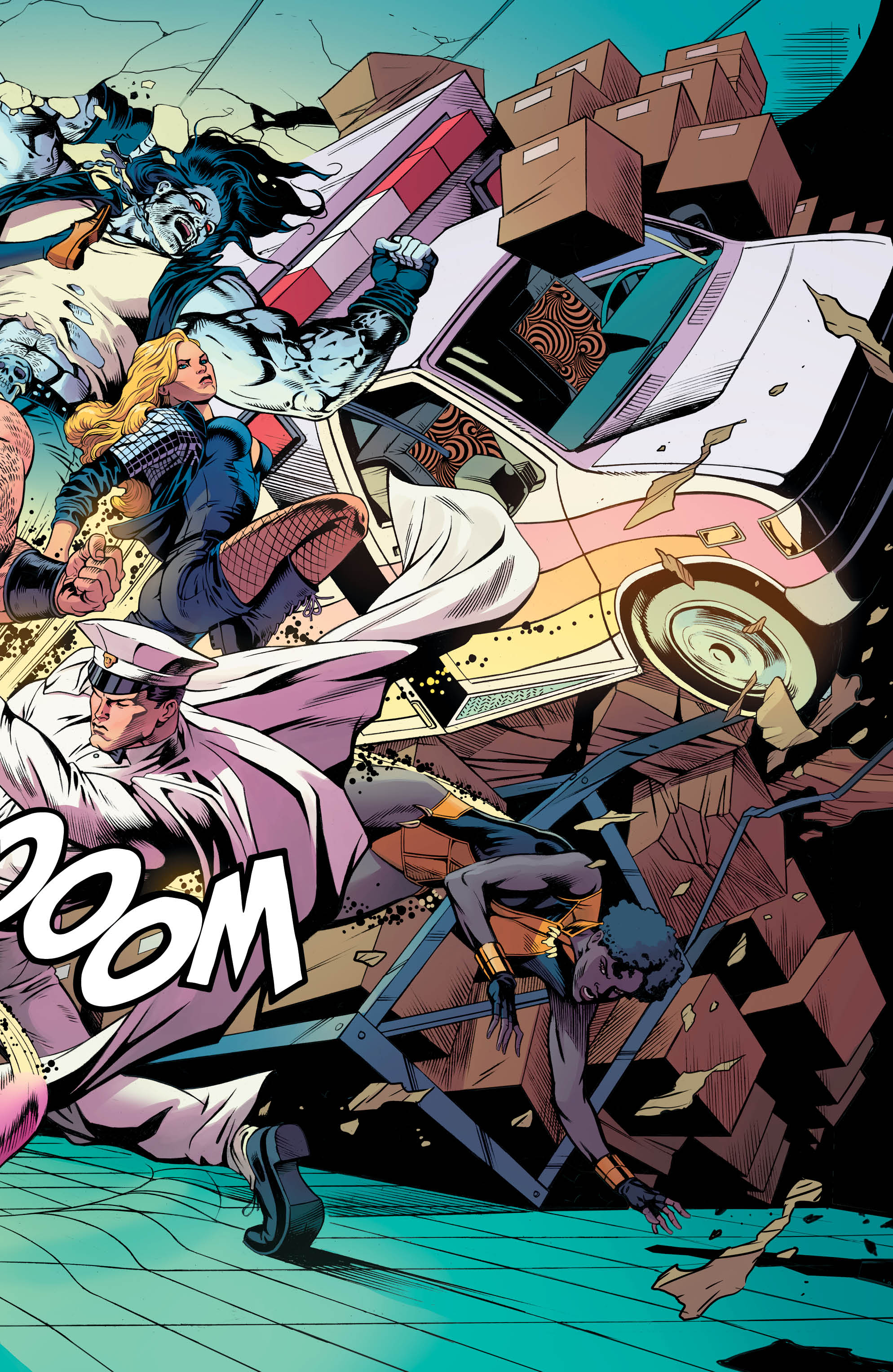 Also, acknowledging the Golden Age Robotman, Robert Crane as the original version of the character is a meta moment as the existence of this character hasn’t even been established in the current version of the DC Universe.  This ties into showing the map of the Multiverse from Multiversity.  Retconn then sort of exists outside the DC Universe itself and could even be seen as the DC publishing offices.  Retconn’s mission to make the characters their best versions is eerily reminiscent of the plan for the “New 52.”  And, destroying everything to re-make it is exactly what was done in DC’s Crisis on Infinite Earths and “New 52” reboot of continuity.  Perhaps, Manga Khan is somehow Marvel Comics negotiating for a takeover.  Who knows, but it’s a wildly different type of story.  Did you catch the reference to a Silver Surfer analogue? 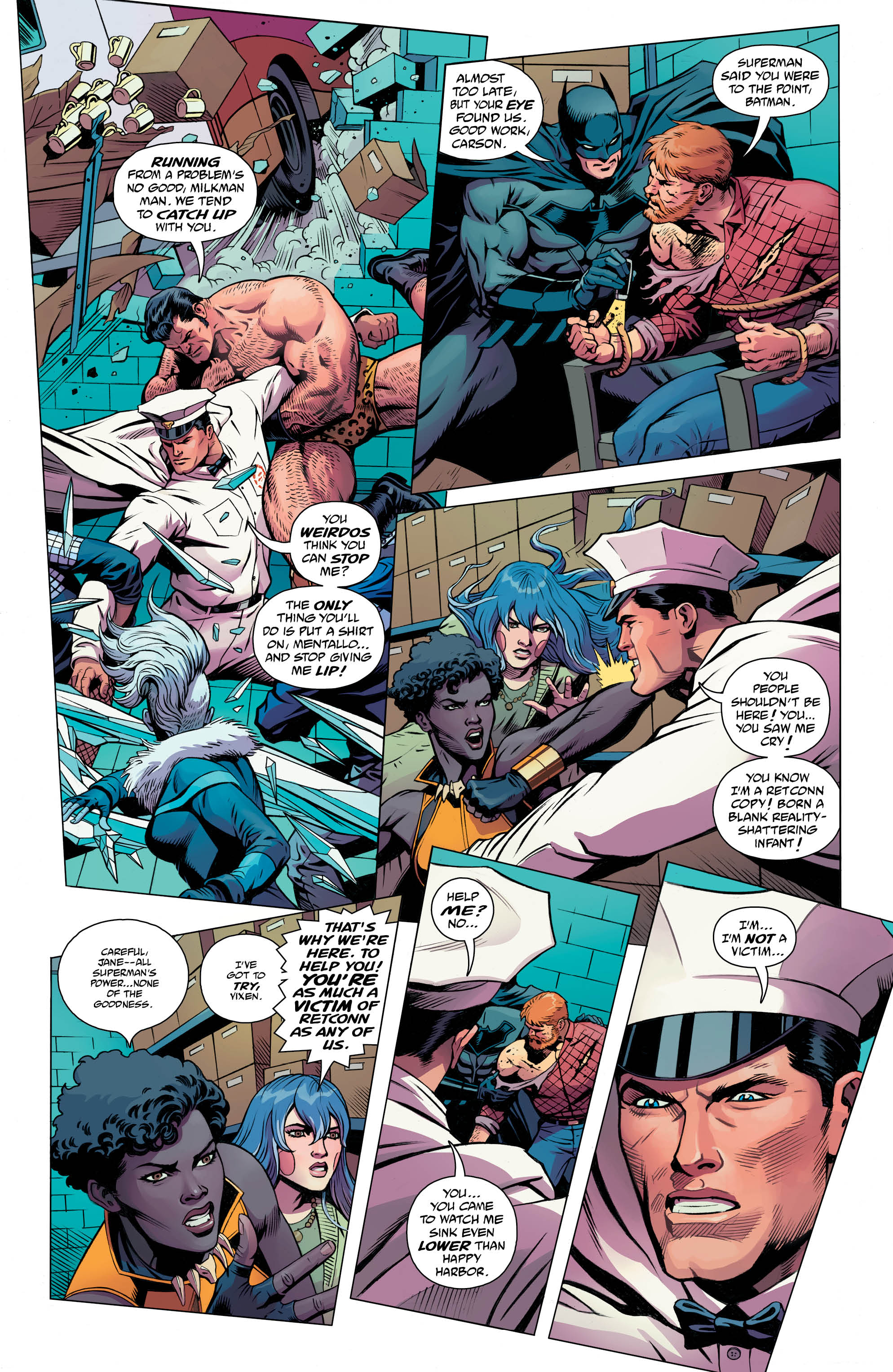 Splitting the art chores up between Eaglesham and Derington for the main story and epilogue, provide the two artists to do what they do best and have it fit together flawlessly.  Eaglsham’s work represents the classic look of a super-hero comic, while Derington provides his own unique look that is emblematic of the Young Animal line.  Colorists Tamra Bonvillain and Marissa Louise are a big part of maintaining a consistent look for the issue as well. 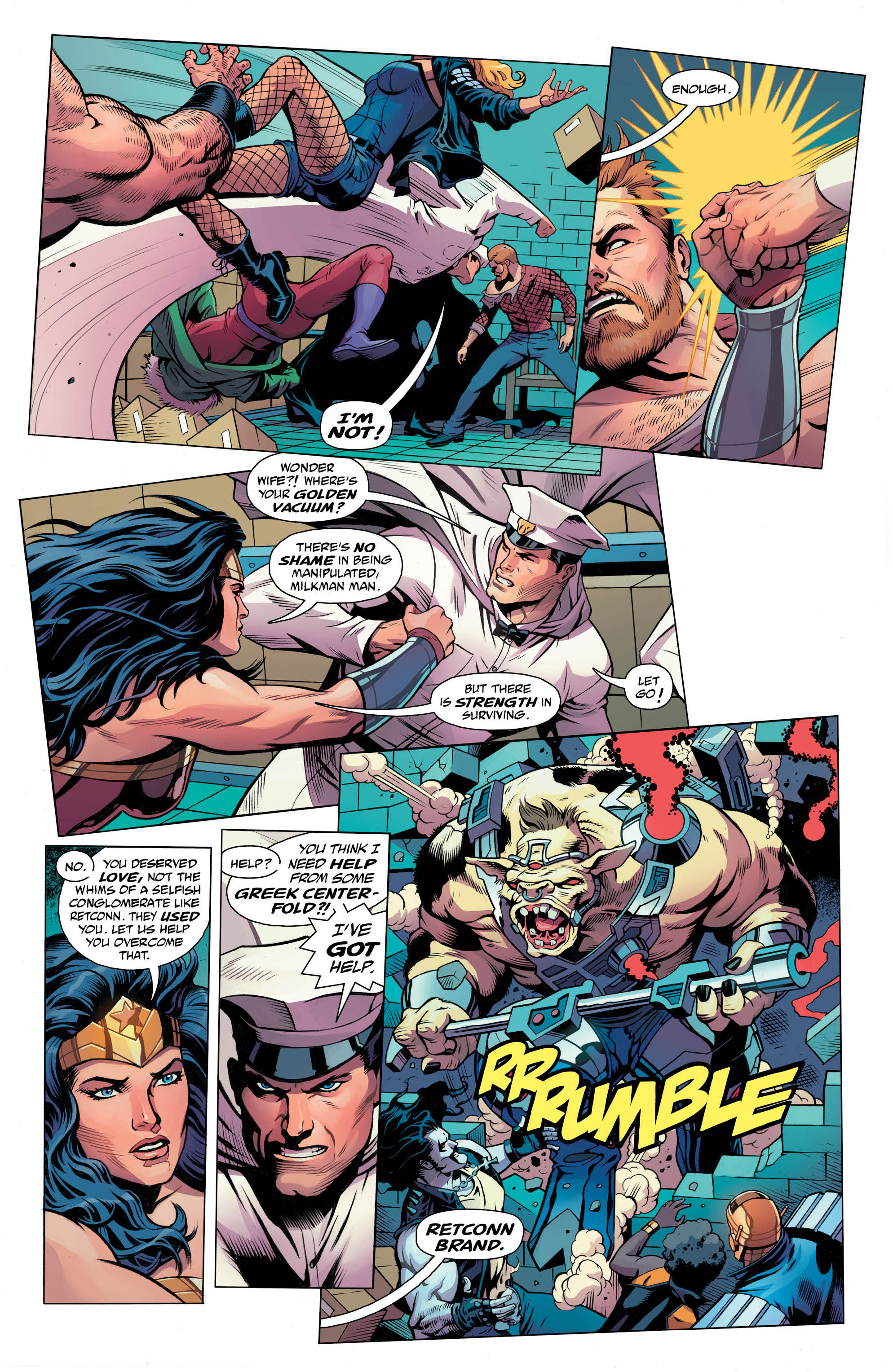 There are a few moments that get a little wacky and out there for even this incarnation of the Doom Patrol.  Flex Mentallo’s Inflation Intensity power is truly over the top, maybe that’s the Adam West Batman in there with that idea.  It just seems to have gone too far.

Changing Cliff as much as he’s been changed is a bit disappointing as well.  There’s nothing odder than a man of metal who’s no longer made of metal. This will certainly have major ramifications for the Doom Patrol. 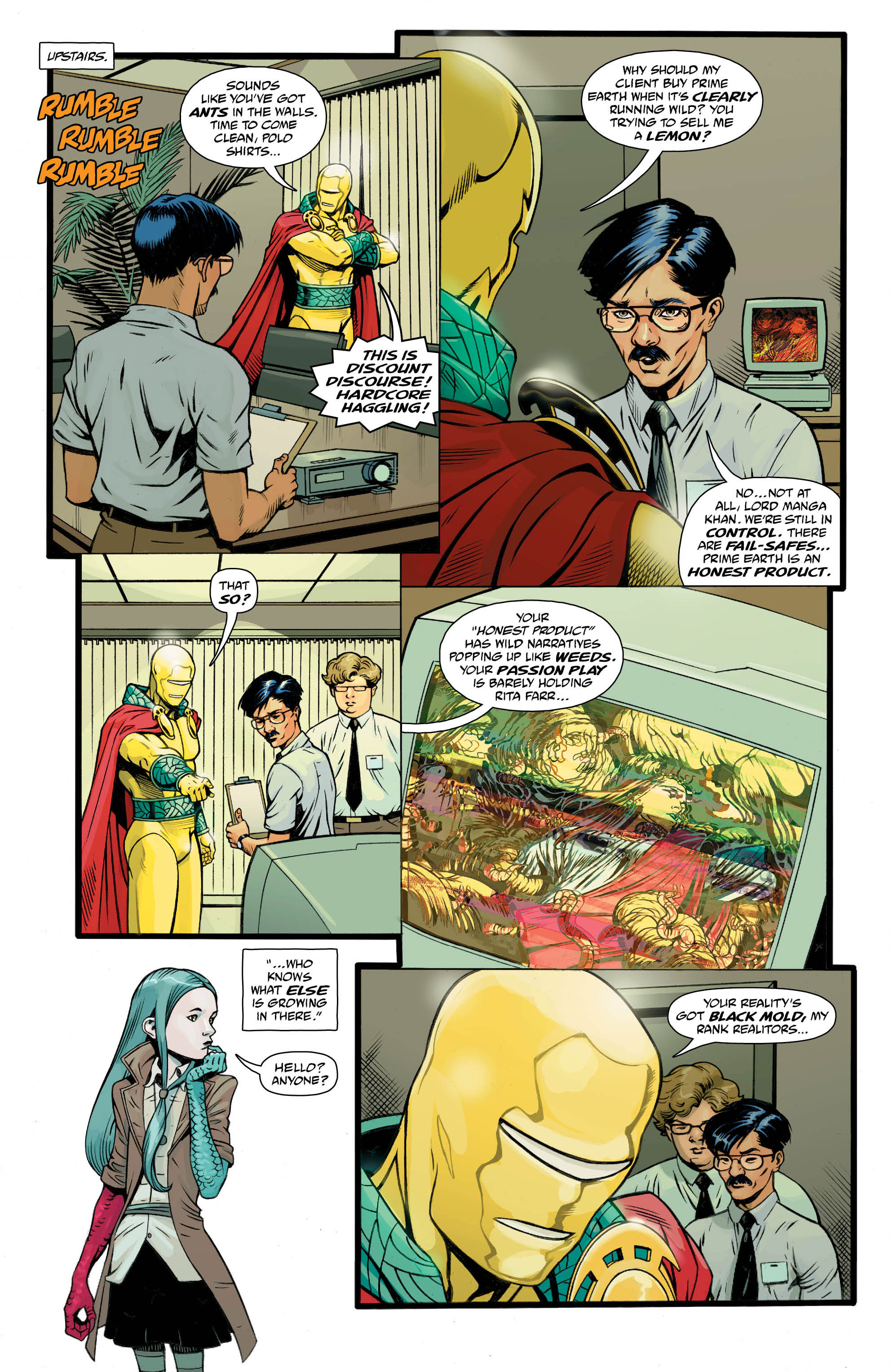 “Milk Wars” has been a fun and offbeat story that successfully teamed the Young Animal characters with the mainstream DC Universe.  While the resolution was typical Young Animal, it also was a bit too Young Animal.  No reason to fret too much, though.

Is Another DC/Marvel Crossover Event In The Works?