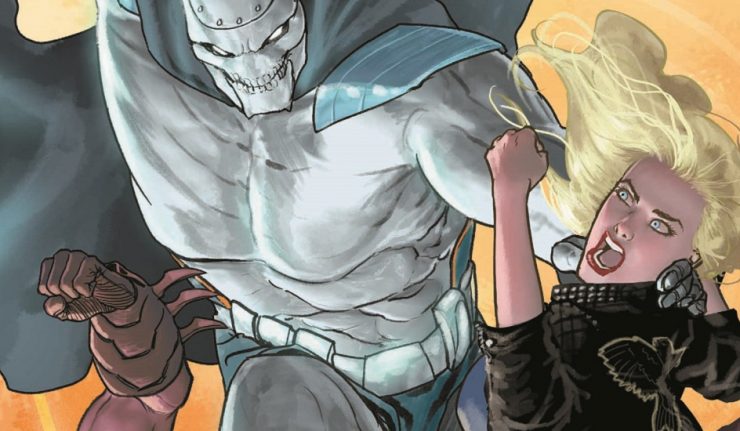 Batman has gone on a mission with Dreamslayer back to his ravaged homeworld of Angor, with Black Canary in tow! Batman has vowed to Dreamslayer to help rebuild his world, but this may be a promise the Dark Knight can’t keep! An all powerful, malevolent being known as The Adjudicator keeps stopping Dreamslayer from rebuilding his world. Can Batman and Black Canary save this already broken world?

Batman is an all powerful force in this issue! From beginning to end it’s always a fun ride watching the Dark Knight in action. Orlando bringing in Black Canary is another special treat as we see them strategize, and ultimately disagree on how best to save Angor. It seems that a villain known as Lord Havok, is the cause of the world’s destruction–and each time Dreamslayer attempts to rebuild that world, he’s stopped by the powerful Adjudicator because he knows Lord Havok will destroy it again. The Adjudicator is a powerful presence, and it seems that he knows all of the events in the multiverse at once. He says he’s unimpressed by Batman and Black Canary because he’s seen so many versions of them before, even remarking how a few of them are pretty dark–using Batman’s evil opposites from the dark multiverse for an example.

I have no negatives at all about this book. It was amazing seeing Batman and Black Canary stand against such a godlike power–knowing they may have no chance at all for survival. Ultimately Batman instead of relying on power, uses his brain and makes asks the Adjudicator about a world without Lord Havok. Would it survive at all? It is in this brief second that Black Canary makes her move, using a canary cry that brings down the very foundation all four are standing on! From there, I expected The Adjudicator to resume the fight, or at least finish our heroes off. That chance doesn’t arrive however as it seems that Lord Havok isn’t actually dead! Taking over Dreamslayer’s body, the destroyer of Angor has returned and has Batman directly in his sights!

This book was packed full of action and I enjoyed every page. It seems that Batman however is about to embark on a personal mission and this was that mission. In the beginning of the book he talks about how he’s not needed to unify people anymore. He talks about how people would begin to doubt his image, and those of the Justice League. It’s the very reason why he put the Justice League of America together in the first place. However it makes you wonder what will happen to Batman and for that matter the Justice League in the future. I’m looking forward to reading the next issue to see what happens next!