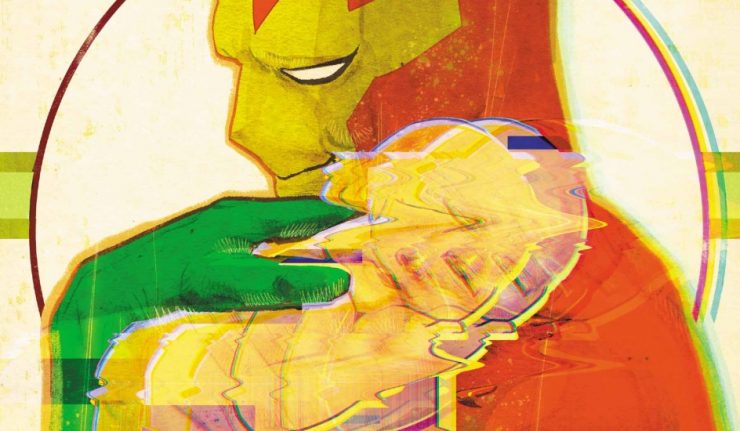 Mister Miracle and Big Barda are in a panic. The war with Apokolips isn’t going well. And it’s Barda’s turn to have her past come crashing back into her present as the Female Furies appear on the scene with blood on their minds. Continuing the acclaimed miniseries that Entertainment Weekly called “by far the best comic on the stands right now.”

This issue does not take place immediately following the events of last issue, but instead jumps ahead several months. Barda, who had just informed Scott of her pregnancy last issue, is now about to give birth to their child, who is the first progeny of both New Genesis and Apokolips.

There is much humour to be derived from juxtaposing elements of the Fourth World against the mundane world that the Frees have chosen to live in. Such as the Female Furies patiently waiting in a hospital waiting room for the arrival of Barda’s baby.

Then there’s Scott’s suggestions for baby names: Axeblow, Thunderdeath, or Ironbreaker (after his uncle). Barda instead chooses the name Jacob, from Jacob’s Ladder, which was a ladder on Apokolips that you couldn’t see the top of, but was reputed to lead to heaven. Barda remembers seeing Scott attempting to escape Apokolips by climbing this ladder.

This series uses a lot of biblical imagery, but this use of Jacob’s Ladder is especially interesting. In the Bible, Jacob has a vision of a ladder that leads between heaven and Earth. Also, there is a both a movie and a book, that tell different stories, but both feature a character that is caught in a nether-realm between life and death.

Could King be hinting that what Scott didn’t actually recover from his suicide attempt, but is having a vision while on the precipice of dying? And if so, will Scott eventually move on from this world, or can he turn back?

And it’s also interesting that instead of feeling paternal to his newborn son, Scott rather says that his baby looks more of a “lump” than a New God. Could this emotional disconnect be because Jacob isn’t real and Scott knows this on some level?

We also learn that following Orion’s death last issue, that Scott is now Highfather of New Genesis, yet he and Barda have returned to their old lives on Earth, with Scott ordering the forces of New Genesis to just carry on their war with Apokolips on their own. I’m surprised that they just let him do so. At least he should have abdicated the title of Highfather to some other New God and let them take over for him.

Also, it may be a minor quibble, but we see Scott registering Barda at the hospital as “First name, Big. Last name, Barda.” Since she uses Barda as her given name and she’s married to Scott, shouldn’t her name be Barda Free? In fact, that is exactly the name she has used in the pre-Flashpoint DCU. I know that it would ruin the joke, but it makes more sense for her to be using her husband’s last name.

This series continues to be a delight and continues moving in unexpected directions. While I’m not sure I agree with Entertainment Weekly that it’s the best comic on the stands, it is certainly near the top and is definitely a unique reading experience.