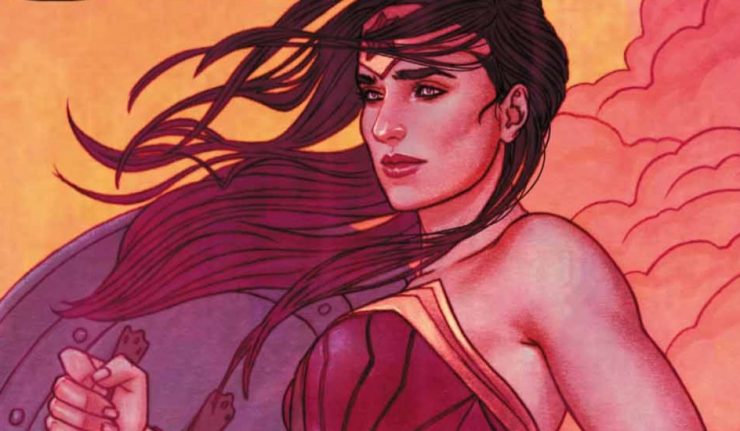 “Amazons Attacked” part two! The power of the ancient gods has returned Darkseid to his former self, but he wants more—he wants the throne of Apokolips back! But to put down the rebellions and civil war raging on his homeworld, he’ll need an army more powerful than he’s ever had before. That sounds suspiciously like the Amazons!

The cover by Bryan Hitch and Alex Sinclair is mostly pretty cool. Wonder Woman and Grail both look great; there’s a grain to Hitch’s work that gives a lot of detail.

The interior art is by Jesus Merino with colors by Romulo Fajardo Jr. It’s solid work. Fajardo Jr.’s colors have always given his issues of this book a unique tone and style that I like a lot. And once the action starts, the art really picks up. The fight between Diana and Grail looks great.

Speaking of which, I really like this fight. James Robinson has Diana using strategy to get the upper hand on Grail which was cool. She isn’t just mindlessly punching which is a pitfall of superhero stories sometimes. Wonder Woman is thinking here and that’s always fun; it makes the hero look more capable.

While the cover is cool, I do think the poses are a little silly. The respective blades are close to the necks that both characters are pretty much going to be decapitated. Grail’s blade is centimeters away from Diana’s neck; there is no way Diana doesn’t immediately die. It’s just a cover so it isn’t that big a deal but I thought it looked weird.

I’m still having a hard time getting myself invested into this story. I think there are two big reasons for that. One is that I find Jason to be a really dull character. This issue doesn’t really change that for me. The part in which he throws Diana at Grail is awesome but that’s about it. I don’t think there’s a lot to him but he takes up quite a bit of the issue. My other problem is I’m starting to realize that I may not like Darkseid. He is such a generic villain in this. I don’t care about what he’s doing at all. He’s just an insanely over powered thug that Diana needs to beat up. His power level could lead to some cool action scenes but I need a bit more. This character has taken up so much of this run, I need a little more personality out of him. It’s personal taste but it isn’t working for me.

This is an okay issue. The art is good especially during the action scenes. Merino does a lot of cool stuff when Diana takes Grail on. That action scene is a lot of fun and, along with the art, makes the issue worth reading. Personally, I don’t find this story interesting. It’s not horrible but Darkseid feels dull and generic and I still don’t really care about Jason. Despite that, the issue is still enjoyable and fun to read.