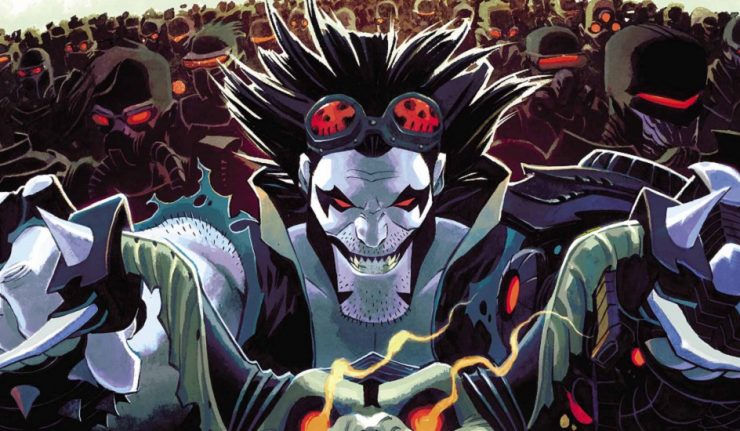 Mercy Graves has been Lex Luthor’s faithful assistant. She’s also been using up her eighth life as Catwoman as she finds new, dangerous ways to take him down. This could be her one final opportunity, but the Garage isn’t counting on it.

The Freescape War has officially begun!

I want to start off by talking about the cover by Matteo Scalera.  This is a gorgeous piece of artwork.  Lobo on his bike is such a beautiful image.  It’s one of those rare covers that I would gladly hang on my wall.

Darick Robertson’s art in the first half of this book is also fantastic.  It’s breathtakingly beautiful to look at.  All the details and the crisp line work, it makes me want to see more from him.

I love that we got to see more from Mercy and learn about who she is.  He detailing the different lives she lived was a brilliant touch, and worked perfectly as a storytelling device.  And tying it into the second half of the book in such a powerful way really brought it all together for me.  That ending caused my heart to sink.  Seeing what Mercy did to save her friends, her sisters, was like a punch to the gut.  This truly is war, and Kelly and Lanzing are definitely not afraid to show that.

We got a bit more from Lois and Jimmy in this issue, which is great because I really love this version of these characters.  Lois is Lois, no matter what world we are in, and it is perfectly displayed here.

Also, the reveal that Luthor is working for Darkseid, trying to bring him back to this Earth, and that it was Darkseid who scorched this world was mind-blowing.  It also links up with the fact that Scott Free, aka Miracle Man, became the Freescape.  I’m betting he tried to stop Darkseid, and failed.

Finally, the introduction of both Lobo and Black Adam as secret weapons in Luthor’s army was wild.  Obviously, we knew Lobo would show up somewhere in this issue, as he is the focus of the cover, but Black Adam was a total surprise for me.  But what isn’t a surprise is Luthor’s plan to betray them once the war is over.

Honestly, to me, the story in this issue was fantastic and showed no negatives.  The same, however, cannot be said about the art.  Although I absolutely loved Robinson’s art in the first half of this book, Brian Ching’s art in the second half left a lot to be desired.  I’m really just not a fan of his minimalist style.  His lack of detail, especially compared to someone like Darick Robinson or Aneke, is a truly glaring problem for me.  At times it even pulled me out of the story and drew away my attention.

Overall, outside of the poor art in this second half of this book, this was one of the best issues of this entire series.  I am so excited to see how they wrap this story up in the final issue.  Bring it on Lex, the Gotham City Garage is waiting.