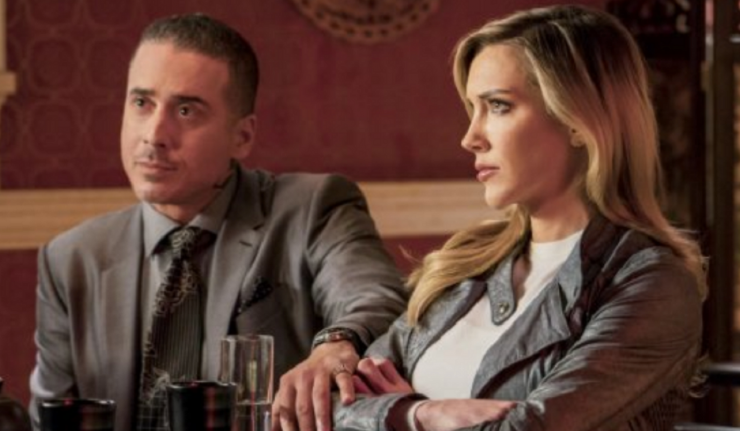 While Team Canary with assistance from Diggle wander into a power struggle Diaz’s membership in Quadrant has caused, Oliver is betrayed by Anatoly yet again with far dire consequences.

After weeks of division, at last we see some attempt at a reconciliation amongst Team Arrow. The return of Wild Dog to the fold reminds the audience of the cost of a vigilante life, both personal injury and how it affects their loved ones. The focus appears to be on the father figures this week: Oliver, Diggle, Rene, and Quentin. And through their situations unfolds the major plot points of this week’s installment. It’s understandable that Rene would be experiencing PTSD following his shotgun injury in the season premiere. It’s one thing to put your life on the line, but to do so knowing your child may not see you again is at the heart of this season. It’s like Slade Wilson said in the premiere, one can only walk in two worlds for so long. While both Diggle and Oliver have managed to find and retain resolve in separating fatherhood from crime fighting for the greater good, Rene hasn’t done that yet. This is because unlike the cases of both their families, Rene’s daughter has no idea her father is Wild Dog. It’s that inability to separate duty from family that makes him freeze, especially when faced with an assailant similar to the one that shot him months ago. It’s only when Zoe acknowledges she’s aware of what her father does and approves does Rene find some measure of resolve.

Diggle, meanwhile, is now working with family as a part of A.R.G.U.S.. The fact he’s ditched the vigilante lifestyle in favor of a more familiar capacity shows the depth of his falling out with Oliver. However, he still remains the voice of reason that supports his old team. He’s the rock that Rene needs in this episode, as they’re both trying to find their feet as of late. The plot device of him being a member of A.R.G.U.S. and ex-Team Arrow veteran willing to work with Team Canary is a step in the right direction. On the opposite side of that spectrum, we have Quentin and Laurel. For the duration of the season, Lance has been trying to see the good in the Earth-2 version of his daughter, and yet she disappoints him at every turn. Blackthorne does outrage and wrath better than anyone in this show in its subtlety and restrain that you can feel. He has brought this complete stranger with his true daughter’s face under his roof and under his protection from both teams. His faith in her is rewarded with further treachery and blackmail by Ricardo Diaz.

However, Katie Cassidy’s performance of a now-torn Laurel feels very genuine. Her facial expressions scream defiance as loudly as her sonic screams. The fact that Diaz can put the fear of God into her the way that Cayden James nor Zoom could says a lot about the once-cold Black Siren. This version of Laurel has been humbled from how Diaz took his vengeance on a childhood bully last episode, so now both father and daughter are trying to protect each other in their own way. This is a huge leap in the making, as the willingness to protect family is now mutual. The twist thrown in following Diaz’s acquiring what he wanted from Lance was unexpected in a good way. It showed the depth of his sadism and further repellent for Laurel.

Speaking of redemption, we are also introduced to a possible redemption for Anatoly, or the possible beginnings of one. Oliver is at the mercy of his former Bratva brother and mentor by trying to draw strength from a friendship long strained. Anatoly’s grievances towards Oliver run deep, and his abandonment of his code is symbolically an abandonment of himself. He’s held those tenets close to the chest for years, and his faith in those beliefs have cost him everything. The ongoing thread in Anatoly’s story is his adherence to a code of honor that is outdated to all but he and Oliver. However, the writing is intelligent in this subplot because it leaves you guessing as to which side he’s leaning towards. And I believe that this is also Anatoly’s way of torturing Oliver. And this ploy backfires because it was Oliver’s plan all along.

Diaz showing his true colors reveals to him the kind of man he’s working for. You can see the shock in his eyes when, during that allegedly “fair fight,” Diaz pulls a knife and stabs Oliver to get the win. Another silver lining – if you can call it that – is the extent of Diaz’s reach to have that many bad cops and enough influence in the legal system to move up Oliver’s trial so quickly. The live coverage reaching all members of Team Arrow serves as a worse-case scenario that they were all trying to avoid. This gives the viewers a sense that although everyone on Team Arrow hates Oliver’s guts right now, that doesn’t mean they wished this fate on him after all he’s done for this city. Intelligent writing and good pacing.

The fight between Oliver and Diaz seems a little slower than what we’re used to seeing from Amell. As near as I can tell that’s the only problem with this episode.

I give this a solid 5 because not only are we finally at Oliver’s trial and the odds are stacked against him. He’s walled himself away from his team and his family, his “back-to-basics” plan backfired, and his ace in the hole failed to come through for him. The update on the state of Team Canary worked in the show’s favor because you needed to get a sense of where everyone is from an emotional perspective when the final bell is rung via that news coverage. Based on what I’ve seen in the trailer we are in for some fun times for the latter half of the season.