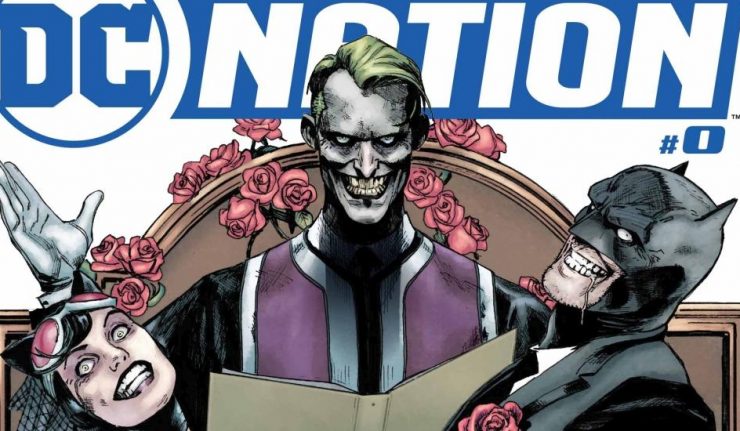 Just in time for Free Comic Book Day, this special comic priced at just $0.25 US features three brand-new stories from a lineup of superstar talent—and each tale serves as a prelude to some of the biggest DC events of 2018!

First, find out how The Joker reacts when he discovers Catwoman has turned her back on crime and plans to marry his archnemesis. Can the Clown Prince of Crime stand to see Batman happy? Writer Tom King and artist Clay Mann set up the events that lead to BATMAN #50!

Then, DARK NIGHTS: METAL shook the DC Universe to its deepest foundations—now it’s time to rejoin legendary writer Scott Snyder, along with all-star artist Jorge Jimenez and co-writers James Tynion IV and Joshua Williamson, for the prelude to JUSTICE LEAGUE: NO JUSTICE! Discover what universe-shattering mysteries have emerged from the most wondrous and chaotic corners of the cosmos to hunt the Justice League in DC’s summer blockbuster event!

And get your first glimpse at Superman’s new world in this exclusive preview of the upcoming six-issue miniseries MAN OF STEEL, written by Brian Michael Bendis with art by José Luis García-López. With Truth, Justice and the American Way all under attack, both Superman and Clark Kent find there’s never been a more important time to stand up for what they believe in.

DC has a busy summer coming up, with three events about to begin: the Batman/Catwoman wedding in the Batman family of titles, the Man Of Steel miniseries that starts a new direction in the Superman books, and the Justice League: No Justice miniseries that relaunches the Justice League books and shakes up the Titans/Teen Titans titles. This book offers a quick peek at each of these upcoming storylines.

The first story features the Joker at his most terrifying. The Joker is holding a man hostage. The Joker and his captive wait for the mail to arrive to see if the Joker receives an invitation to the ceremony. But what will happen if no invitation arrives.

The Superman story appears to be set in present, as Superman’s suit has the trunks and the new cuffs on the sleeve. We learn that Lois has apparently quit the Daily Planet, and hasn’t been heard from since. Oddly, no reference is made to Clark and Lois being married or their son Jon – but it’s only a brief scene, so that doesn’t necessarily mean anything has been retconned away, but there has been some speculation about the characters that has me anxious about their continued presence in the Bendis Superman books.

Also, I must say that the Superman artwork is especially crisp and clean, and evokes a feeling of the 70s and 80s Superman comics. I am quite pleased to see Garcia-Lopez returning to Superman.

Interestingly, there is a mention of Clark having written an expose on President Luthor. Apparently, this part of Luthor’s pre-Flashpoint history has been restored by the alteration in the timeline in the “Superman Reborn” story. Hopefully Bendis’ Man Of Steel mini will clarify Superman’s canon more clearly.

The third story is a brief glimpse of the Justice League: No Justice event and does little more than introduce the four Justice League teams that will be active during this event. Given the sheer number of characters and the limited page count, we couldn’t really ask for much more than a brief introduction anyway.

However, we do get a few good character moments, such as Batman offering reassurance to a worried Beast Boy. Also, we get a peek at what the heroes left behind on Earth, such as Green Arrow and Supergirl, have to contend with while the others are fighting off-planet.

One thing I’m unclear on is how Batman will be marrying Selina, but still keep his identity secret. Isn’t her secret identity known to the police and other criminals? In the past, other villains have referred to her by name. So, if rumours are going around that Catwoman is marrying Batman and Bruce and Selina are publicly getting married, then it seems pretty obvious that Bruce and Batman are one and the same? Hopefully, King will offer us an explanation during this storyline.

The only other complaint is that these stories are only very brief teasers that don’t give much information about the storylines. This made me feel that perhaps each story might be better served if there was a dedicated preview book for each. However, the stories are intentionally tantalizing glimpses at the storylines, and they serve this purpose beautifully.

With a list of writers like King, Bendis, Snyder, Tynion, and Williamson all in a single issue (not to mention some great art) – and only for 25 cents. It’s the bargain of the year. Don’t miss this early peek at DC’s summer events.