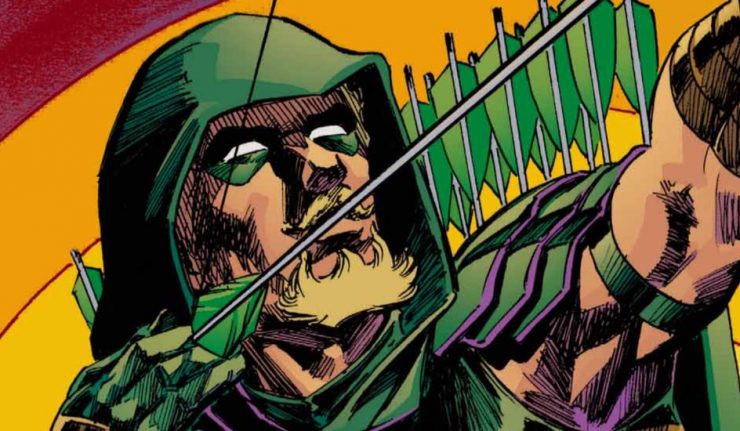 “THE CHILDREN OF VAHKAR” finale! Nothing and his army have left Green Arrow for dead in the desert. In order to get himself back to full strength and take out the army, Green Arrow will have to team up with a band of rebel heroes in Vahkar—but will they trust him? Or will he only find himself with more enemies to fight?

The cover by Tyler Kirkham and Arif Prianto is pretty cool. I like the detail in Ollie’s broken face. The best part is the green background forming his hood. That looks amazing.

I love that this is a two part story. I figured it was going to be longer and it was a really great surprise that the story ended up resolved here. Lanzing and Kelly waste no time in this issue and it’s effective.

I’m not crazy about the art. It’s not bad in any way but it doesn’t do anything for me. It’s just a difference in taste but the art doesn’t engage me. The characters look off which makes it difficult for me to get invested in the characters.

This is an okay issue. I don’t really like the art but it isn’t necessarily bad; it just doesn’t work for me. The brisk pace helps the issue a lot; they get a lot done in a small space and I appreciate that. These kids are fun and interesting; I certainly would like to read more about them.