‘Gotham’ Not Allowed to Use ‘The Joker’ 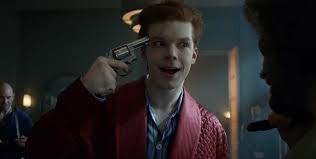 Members of Gotham’s cast and crew have confirmed that the show is not allowed to use the formal Joker character.  Both actor Cameron Monaghan and producer John Stephens announced the news recently while confirming that Jerome is not the Joker.

The series following young Bruce Wayne, which was recently renewed for a fifth and final season, has introduced origins for villains such as the Penguin, the Riddler, Ra’s al Ghul, Poison Ivy, Mad Hatter, Selina Kyle, Mr. Freeze, and more.

Cameron Monaghan has played to characters now that fans have suspected could become the Joker, but today we learned that it just will not be possible.  His tweet announcing the news can be found below.

Various hair tests. Pure green was off-limits to us (as well as the name "Joker"), a decision from high-up as they wanted to reserve these for films. A decision which ultimately I respect. They did not want to dilute the very lucrative brand. It allowed for creativity on our end. pic.twitter.com/pSlacSUTjU

Producer John Stephens added some clarification to Cameron Monaghan’s comments as well as explained the mindset behind Jerome and Jeremiah saying:

The other characters are who they are. Mad Hatter, Scarecrow, etcetera. But no, he isn’t the Joker. What we’ve always gone with is that Joker is somewhere out there, anonymous and unformed, in Gotham, and he’s watching the actions of Jeremiah and Jerome and possibly even another one, on his way somewhere down the line, and he’s adopting them as inspirations as the person he’ll one day become.

Once again, Warner Bros seems to uphold its bizarre rule that characters cannot coexist across media platforms.  First the Justice League animated series is unable to use certain villains appearing in Batman: The Animated Series.  Then its the Arrow Suicide Squad being killed off before the release of the Suicide Squad movie.  Yet we have two Flashes.

It looks like fans will have to be satisfied with the Valeska brothers as Gotham approaches its 5th and final season.  You can catch the season finale of Gotham on Thursday, May 17th on FOX.