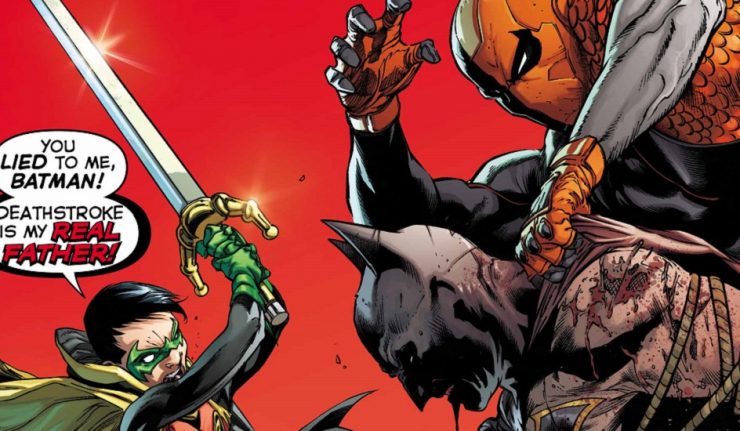 Under the disguise of father and son, Damian and Slade Wilson hit the road to track down one of Slade’s old assets and it seems that the two have more in common than Slade would like to admit! While Damian seems to have already concluded that Slade is his father, Slade is still standing firm in his belief that he’s not! Slade is currently enacting a plan however to attempt to find out for sure!

Deathstroke #33 starts out as pretty hilarious as the story begins with Damian and Slade Wilson on the open road in disguise on their way to a contract! Dressed seemingly as father and son, it seems that Slade has Damian in tow in order to draw out Batman–who’s obsessed with shutting down Slade’s network until he has answers as to Damian’s true paternity. Priest doesn’t hesitate to immediately show the ideals that these two individuals have in common–especially when it comes to their capacity to kill. Damian really shines in this book as you see how he has amazing detective skills and perception such as Bruce but yet his methods are very cold and calculating–much like Slade Wilson. Even Slade has brief moments where he’s slightly impressed by Damian–still not impressed enough to admit he’s his father though.

I don’t have any negatives about this book. Ed Benes does a great job of showing the emotions of the characters so well, especially Damian’s. You can tell that he seeks to emulate Deathstroke in so many ways, however it’s also sad to see him further deviate from Batman’s training. At heart it seemed that maybe Damian feels that he was never truly Bruce’s son, as he seems so eager to follow Deathstroke. I’m thinking however that Damian knows better, so I’m thinking that Batman has some intricate plan at work here. Priest leaves us with a crazy cliffhanger, where it seems that Deathstroke knows finally the truth, and he takes off to encounter Batman once again!

Overall Deathstroke #33 was a good and entertaining read. It’s funny to see Deathstroke attempting to corral someone as ruthless as Damian, but it’s also very disheartening as well. I’ve enjoyed Damian in his role as Robin, and I’ve watched many fights where he’s fought side by side with Batman–it’s very hard to believe he’d join Deathstroke so willingly which is why I’m sticking to my belief that Damian is working on a plan–perhaps with Batman to find out the proof of his paternal D.N.A once and for all. Can’t wait for the next issue!