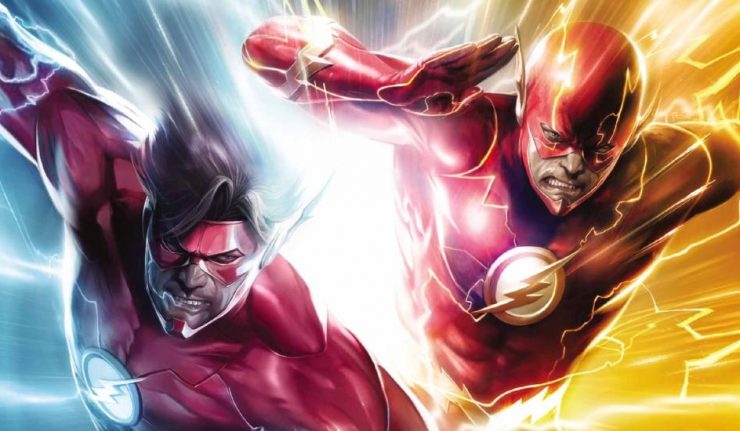 As the dust settles in the wake of “Flash War,” the Flash and his family of speedsters try to pick up the pieces of what’s left. But bad blood can run deep. This is the one race the Flash Family can’t win!

Very often, some of the best single issues of a series are stories that contain no fighting or action, but deal with the relationships between the characters as they interact with each other when they don’t have a threat currently hanging over them. This is one of those issues.

After the events of the Flash War, the Flash family attempt to deal with the fallout of their conflict with Zoom and recuperate. The emphasis on the issue is the original Wally West. Zoom reminded him of the existence of his children Jai and Irey, but Wally was left with no way of finding and rescuing them.

Wally refuses to accept this and runs at his maximum speed, searching for them and helping anyone in need he encounters during his search. This is very much in character for Wally, hearkening back to an important point in the Mark Waid story. In this story, Wally encounters the first time that he’s ever not had enough time to save everyone, and works himself into exhaustion continuously helping everyone he can.

Barry and Iris are worried for Wally, but can do nothing but wait for Wally’s run to come to an end. This runs totally against Barry’s instincts to catch up to Wally and help him with his search, but Iris convinces him to wait with her.

In fact, the story does establish that Iris and Barry are Wally’s parents, in spirit if not in actual fact. In flashback, we see that Iris takes a maternal role with Wally right from his birth, and eventually takes over care entirely for him in his teen years. At which point, Barry takes on a paternal role, both as Iris’ boyfriend Barry and as Kid Flash’s mentor, The Flash. As Iris tells Barry when he questions whether he dealt with Wally’s situation correctly, “You did what any father would do.”

There is also a nod to another important part of Waid’s run on The Flash. In the future, Iris wrote a book titled The Life Story Of The Flash, which not only held the key to The Return Of Barry Allen storyline, but held hints at Wally’s future. Eventually DC released a graphic novel based on this book, which told the history of Barry (and Wally).

Not only does Iris remember writing this book, she entitles the story she is currently writing, and which serves as narration for this issue, The Life Story Of Wally West. Although Williamson is writing the adventures of Barry as The Flash, he is giving Wally and his history its due respect. This is shown is the dialogue he writes for Commander Cold, “Barry was [Wally’s] Flash. But for a whole generation… he was theirs.”

Iris remembering this book, presents some questions about the state of the Flash continuity. She talks of remembering another life in which she wrote that book. However, the Iris that wrote that book was somewhat older, having been married to Barry for several years. It was also this Iris that brought her and Barry’s grandson Bart (a.k.a. Impulse) to the present. Theoretically, Iris shouldn’t remember this book or many events told in it, as writing it should still be years in her future.

Also, Iris is shown as being an adult (or nearly so) at Wally’s birth. Given Wally’s current age, Iris should now be somewhat older than the New 52/Rebirth continuity has established for her and Barry’s approximate ages. For the timeline to make any sense, Doomsday Clock will have to restore the missing years that were mentioned in the DC Universe Rebirth special.

This issue serves as an intro into the events of Heroes In Crisis event. After Wally’s breakdown, Superman and Wonder Woman arrive to take Wally to the mysterious Sanctuary to recuperate. This is the first in-story mention of Sanctuary, and serves introduce the concept of a recovery and recuperation facility for DC’s heroes. And we are told that Wally’s story will continue in this event.

Batman also makes an appearance, and the conversation between Barry and Bruce serves to remind us of how close many of DC’s heroes have come to the point where they will need the services of Sanctuary themselves. This is especially meaningful, when you consider that Bruce is currently dealing with in his own title, having been left standing at the altar by Catwoman.

There are other changes for the Flash family evident in the issue. Barry and Iris’ relationship has recovered to the point where Barry is moving in with Iris. Unfortunately Kid Flash, still angry with Barry, reacts to this by moving out. We are not shown Iris’ reaction to this, but it could become a sore point between her and Barry.

With Barry moving in with Iris, Commander Cold is taking up residence in Barry’s apartment. It seems that Cold is settling in to a regular role in the title until he can find his way back to the future. This opens up some interesting story possibilities. How will the Rogues react to a new hero who appears to be stealing Captain Cold’s modus operandi? And what will Captain Cold himself do if he finds out?

Oh, and seeing that Central City is finally making the Flash Museum a reality is a delightful bit of fan service for longtime readers of The Flash.

I’m very worried about Wally West. We are told that his story will continue in the pages of Heroes In Crisis. However, DC has said that at least two characters will be meeting their end in this event. With two Flashes, could DC be planning on getting rid of the extra one? This issue has an air of finality that could be seen as hinting that Wally’s story is coming to a close. And the cover does show the banner “The Last Race Of Wally West?”.

However, this comes with a question mark, so it doesn’t qualify as a pronouncement. Also, Iris states that “Wally’s story is far from over” and that “Wally West will be the GREATEST HERO who ever lived”, so maybe Wally’s future is safe. In any case, DC better not be planning to kill him off, as they would surely lose the goodwill they won back from the fans by bringing Wally back in the DC Universe: Rebirth special.

This issue is an amazing and touching bookend to The Flash War saga. There is a healthy dose of reverence to the history of both Flashes, as well as a look towards both their futures. I am looking forward to seeing where Heroes In Crisis takes Wally. Hopefully he will eventually get his own ongoing series. And Barry’s own series is in good hands under the care of Joshua Williamson. 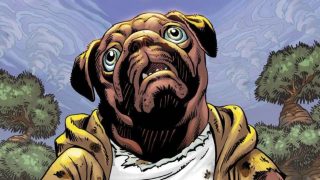