Review: The Curse of Brimstone #5 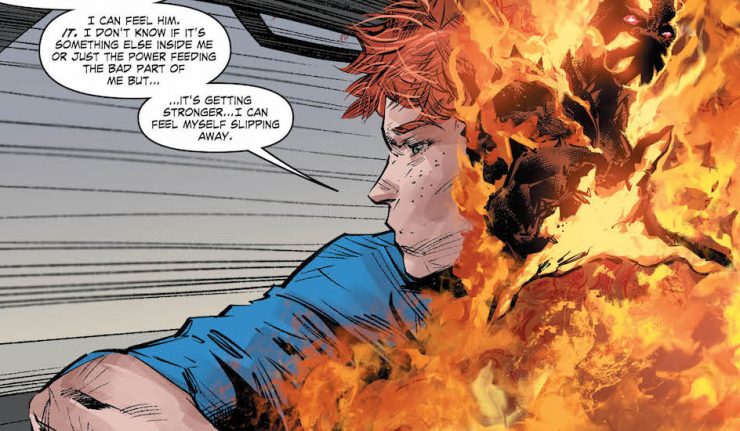 “Children, you must understand, are monsters.” Catherine M. Valente

Doubt is a horrible voice that nags you and threatens your confidence. When one voice is replaced by the voices of a growing number of mind-controlled children chanting a haunting nursery rhyme in the deserted town of Marienbad, Virginia — you have new problems. And, when you’re a guy like Joe who struggles with guilt lingering from the actions of his alter ego Brimstone, he might as well just add it to the list.

The quote at the top is exactly how some people view children. If you feel this way, the kids in this issue will only support that belief. Maybe not, but they will scare you, and it’s not a sin to leave the lights on while you are reading this issue. The nursery rhyme the kids recite is creepy, and if you grew up on the Nightmare on Elm Street slasher series from the 1980’s you will enjoy the reference. Even if you never saw the movies, listening to a throng of children carrying weapons and reciting the same sing-song words should be a frightening image.

I like the guilt that Joe is carrying with him from the last issue. I think it is an important moment that explores the range of Joe’s emotions following each transformation into Brimstone. There was only a limited degree of resolution at the end of The Curse of Brimstone #4. Joe killed another creation of the Salesman, but the town and most of the people living there were destroyed, and the stranger who almost killed him got away. It creates an important struggle for Joe, who is afraid that the more he uses his powers as Brimstone the more he is doing exactly what the Salesman predicted.

The creepy ghost-town panels on page 6 and 7 are spooky and build the classic thriller environment that makes your skin itch waiting for something to happen. The abandoned vehicles and deserted homes are a nice framework, and then on the last panel is the shadow of a leg running that Annie barely sees.

Why is it that you can never trust the only survivor of a massacre? That question kept running through my mind after Joe and Annie find a solitary figure named Jack. Jack tells them about the way SlackJaw communicated with the children using television, radio, and phone signals. That’s how he became their friend and how he convinced them to submit to his will and turn against the town. Jack’s description of the night his wife was attacked by their son is a terrifying image, until the moment when Joe and Annie ask the same question that has been bothering this reader. How did Jack survive?

The answer is that he is the bait in a trap.

A great moment when the kids come rushing in is the sudden shift in Jack’s demeanor. He changes from a broken and confused man to a violent attacker. When he slashes a kid’s throat, and Annie asks what he is doing, his only reply is, “Surviving.” Chilling and effective.

The kid who is the mouthpiece for Slackjaw is a creepy little child with a painted clown smile. It’s unclear at this point if this is the real Slackjaw but, the way he speaks through this boy is a disturbing final image.

I was really confused by the images on page 8. In the last panel on page 7, there is a silhouette of a hand holding a knife behind Annie right as she begins to turn around. Then on page 8, Joe has turned into Brimstone and the guy holding the knife, Jack, appears to be in the air. A second look suggests he could be on the ground at a funny angle, but then I wonder if he is somehow suspended in the air by the heat from Brimstone or if Brimstone has the power to lift someone in the air. I didn’t want to stop to think about this, but it happened.

The final panel is a stack of television sets in the shape of a pyramid, the smiling faces of the children and their protruding limbs are like the mortar in a wall that reminds me of a scene from the movie 300. I know that this is supposed to be haunting, but without a clear understanding of what it means, the image loses its final impression.

It was nice to enjoy a longer story. The second and third issues of Brimstone have been great one-shot stories that are concluded on the final page. The last issue provided the first taste in a longer arc. Expanding the players, layering the conflicts, pushes Joe, Annie, and Brimstone to reach, fail, and grow. I’m looking forward to the next chapter and bigger challenges. 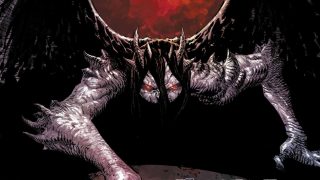 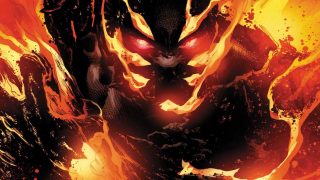