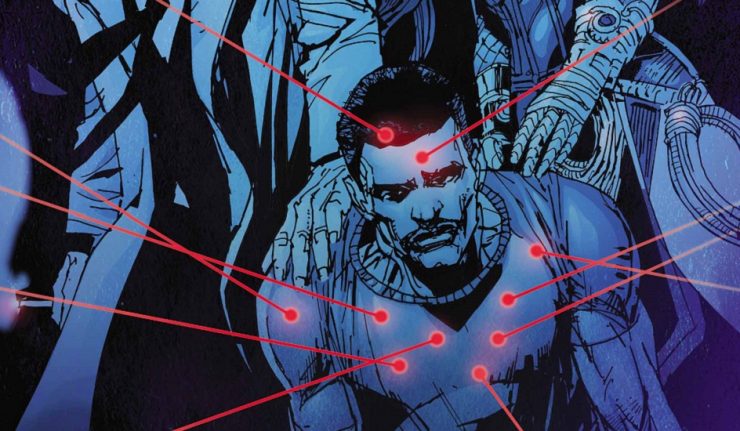 The series inches ever closer to its conclusion as things heat up even more for Michael Cray. A nonstop issue from start to finish sees Cray have an unexpected altercation with Homa as well as come even closer to understanding what the voice inside his head is. Outside of Cray, Constantine enacts an occult ritual with dire consequences and Diana Prince slaughters a team sent to kill her.

The first thing readers will note this month is the new layouts by Phil Hester. It completely changes the feel of the issue in comparison to recent months. The layouts add a certain flair to the issue and gel really well with an action heavy issue such as this one. As always, Ross Campbell’s colours really bring out the best of Steven Harris’s artwork, which, coupled with Hester’s layouts, make for a surprisingly good looking issue.

Considering the negatives of the series are usually Harris’s artwork, it is great to see the book make such improvements as the series gets closer to a climax.

Bryan Hill has brought a tour de force for readers this month with just the most minimal amount of dialogue. What is said is evidently important since the dialogue is so sparse. Hill’s ability to include pivotal dialogue whilst keeping the action and pacing so intense is commendable. The issue is bookended with two fantastic action set pieces, along with a nice chunk of dialogue driven plot development in the middle. It’s a joy to read.

Hester’s layouts really add to the action sequences, with panel borders being noticeably different to indicate where sequences are taking place. Certain pages even utilize the panel layout to make Constantine’s scenes look similar to tarot cards, which is an obvious connection that works perfectly. The issue even makes use of characters moving in the gutter between panels, which does feel a bit reminiscent of Morrison’s Animal Man, but this only further adds to the similarities between real life writer Grant Morrison and this world’s fictional John Constantine.

Truly, there is not much to critique. Bryan Hill is delivering a fantastic series that consistently provides more entertainment than the parent title, The Wild Storm. It’s incredible that the series has developed so much in only ten issues.

If there were to be any complaints this month, when issues are so action focused readers can fly through the entire story in five minutes or less, which is disappointing. But at the same time, it gives those who enjoy it plenty of time to reread the issue in preparation for next month.

Beyond that, the only other critique is that N. Steven Harris’ faces still come across as a little ‘off’ in places. From eyes going two different directions, to noses taking over face real estate, it’s a shame that this problem still persists.

This is a series readers shouldn’t miss. What was at first enjoyable is now fully engaging and taking over from the parent title. Michael Cray is the series to follow for both DC fans as well as Wild Storm fans.