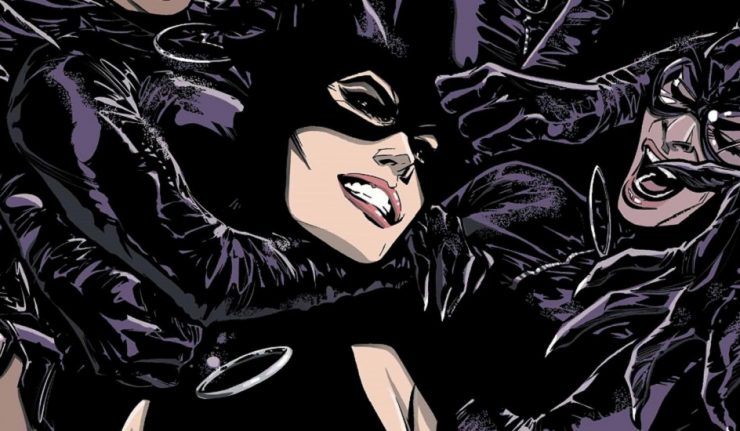 Gotham’s a toxic litter box for Selina Kyle of late, so she hits the road looking to clear the air, change her look and clear her name, too—there’s a copycat burglar swiping her M.O. who needs sorting out. In her hometown, Catwoman runs afoul of a crime boss who’s also hunting this impostor. Can the two declare a truce to hunt a mutual enemy, or will Selina end up just more roadkill?

Joelle’s style of writing and art compliment each other like a power couple. The pacing doesn’t feel like a superhero comic, but rather a noir, like what the late Darywn Cooke was known for. What works is that there is no metahuman attack or anyone familiar from Batman’s Rogues Gallery. This is a fresh start for Selina with this bizarre antagonist, as they are complete opposites, yet are both strong female figures. Creel’s body and face are a mess in spite of all her wealth and position on the social ladder. Selina, meanwhile, is a woman worthy of the Batman: skilled, cunning, resourceful, streetwise, and formidable in battle. Further, the fundamental difference emerging is that Creel values nothing; her own vanity and pursuit of prestige come before people who are pawns to her, even her own family. The fact she has drawn her own sons into her corruption shows a lack of a soul. Even the Governor’s health crisis doesn’t make her give pause, other than for the ramifications this could present for her agenda.

It takes someone truly cold-hearted to not give a thought to someone diagnosed with cancer. Her “Oh, well” reaction is despicable, and that goes along a lot further than the hammer scene to establish her as a villain. In contradiction, Selina is a quintessential thief with a heart of gold. Yes, she is a professional thief and known criminal, but her value in human life has earned the favor of both Bruce and fellow heroes. Her interactions with Carlos – a possible rebound? – demonstrates she is not that embittered from her life choices as of late. She’s capable of being kind to those who deserve it as much as her ferocity is reserved for the opposite. She’s evolved from villain to anti-hero. She may not share Batman’s unbreakable morality, but those corners are cut for ultimately the greater good.

Art-wise, Joelle doesn’t disappoint. The line thickness in her figures and minimal highlights and surface detail on form-fitting dresses and suits delivers a balanced photorealism that drives home the maturity of the story. Without color, the panels would still hold you. You feel the steel in Creel’s glares, and the sensuality of Selina’s smile. As to the subplot of Will, you can feel a head-on collision is coming between he and Catwoman. Jones is depicting him as the only good cop in town, much like Jim Gordon in Gotham.

While the issue serves to deliver the unexpected, I think the only let-down was the apartment brawl between Selina and the imposters. It just felt a little subdued and could have been layered against the Creels’ activities at the same time. Three fights and it’s over? It makes Creel’s threat less credible if she’s hiring actresses and stuntwomen to frame Selina.

At this point, it’s also difficult to get a bead on the family dynamic. Jones borrows from Mario Puzo in that sense. You get that organized crime feel from the Governor’s wife, but we have yet to see her wield her full potential. Are we going to see this in the next issue? It seems as though she’s set up Selina to take a fall at this gala. And the worlds colliding feel is there as well regarding Will and Sam. Cops are dead, and yet no one is batting an eye or devoting any real time to the investigation save for Will.

But, while a powerful dilemma, it’s another facet of the story that’s subdued. Is it because Frank Miller did it to death thirty years ago? The cliched town that likes to stay dirty? It seems as hollow as Mrs. Creel’s nose at times.

While the art and writing are good, the cliffhanger from the opening issue could have lasted to at least halfway into the book. The subplots have potential, but they’re not being given enough attention that they’re due. Is Jones trying to steer away from convention? Creel is a potentially good villain but we have yet to see her unleashed yet. Still, what we’ve seen so far is reason enough to keep turning the pages.

And her leaving Bruce at the altar is there through minor visual reminders like the ring she refuses to part with, yet isn’t the focus. Reviewer or not, I’m still going to buy the book for the good points that I’ve already outlined and I highly recommend it.