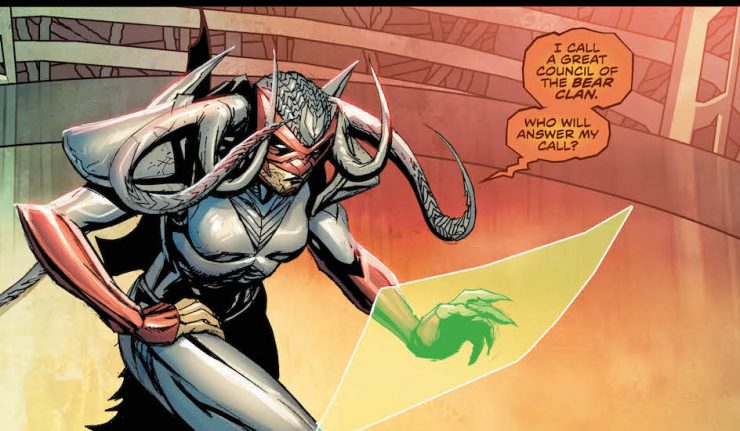 The future of The Immortal Men has never been at greater risk. The House of Action is once again complete with the rescue of Reload, but Kill has the Bloodless on their heels and The Hunt is close behind. The team’s one chance to make an escape will save their lives for now, but will it doom the very future they are fighting to save?

Amanda Waller knows something about Carthage. Nothing about Roderick Clay’s appearance at the toy store or his story he tells inside an interrogation room grabs her attention until she reads the word Carthage. Suddenly, she has to be in the room with Clay. How much does Waller know about the immortal conflict? I guarantee its more than us.

When The Infinite Woman calls the other houses to present the death of the Immortal Man, we learn that the House of Harmony has been hidden for more than three centuries. It’s also revealed that The House of Conquest is The Siege, The House of Knowledge is The Codex, and The House of Expression is The Masque. They are about to call a quorum when Kill bursts in to announce the arrival of the House of Action. What were they going to vote on? What, if anything, does it have anything to do with The Infinite Woman’s partnership with the Batman Who Laughs? Does anyone else smell a fish?

Caden looks like he is starting to settle into his new clothes and role. The trench coat looks good. It almost gives him a John Constantine aesthetic, but with a black tie. The mask looks natural. His movements reflect the skills he has gained from his ability to grasp specific moments of memory from his teammates and enemies. Communion’s appearance during Caden’s battle with the Bloodless on page 9 is quirky, annoying, predictable for a computer program based on someone more familiar with coding than people. Her tactical decision to upgrade the Blood Mask mid-fight displays a matter-of-fact approach to problem-solving.

I love a decision that is made out of necessity. It’s the perfect start to a recipe for disaster. The choice to take the fight to the House of Conquest has succeeded in reuniting the team with Reload. It’s a giant ship hovering above Manhattan that is invisible to the rest of the world. But, the Bloodless are swarming and Ghost Fist can’t teleport the team out. For a final ingredient to complete the recipe, base the decision in desperation. Communion tells Caden that by destroying the tower that keeps the ship invisible, The House of Conquest will be too distracted to stop The House of Action from escaping. But that choice also means that The Immortal Men will no longer exist in the shadows.

Now, turn up the heat and stir briskly. The Infinite Woman arrives right when Caden, Timber, and Sprout reach the tower. Caden tries to face her by himself which is when we learn that The Infinite Woman’s sword cancels out his Blood Mask.

Continue stirring until the mixture has thickened.

Timber grows tall enough to tear down the tower. The ship becomes visible over Manhattan and the House of Conquest is thrown into confusion. Not only are both houses now exposed, but the final page shows Batman presenting footage of their appearance to the rest of the Justice League. Now the entire world knows that The Immortal Men are real.

I cheered when Reload shot The Hunt four times, one in the head.

Having Reload stay behind to hold off The Hunt and Kill felt strange after the team risked everything to rescue him. Caden’s return in the final pages to make sure no man is left behind redeems some of this decision. It felt like there should have been a different character at risk, but I can see the emotional investment that has been made by the reader since Reload’s initial capture and torture.

I love that the conflict between the five immortal families is no longer a secret battle. The fact that this puts them directly in the sights of the Justice League will create such great conflict in the following issues. Add the eventual reveal of The House of Harmony, and the world of The Immortal Men and our knowledge of it will continue to grow — much like my affection for this series.