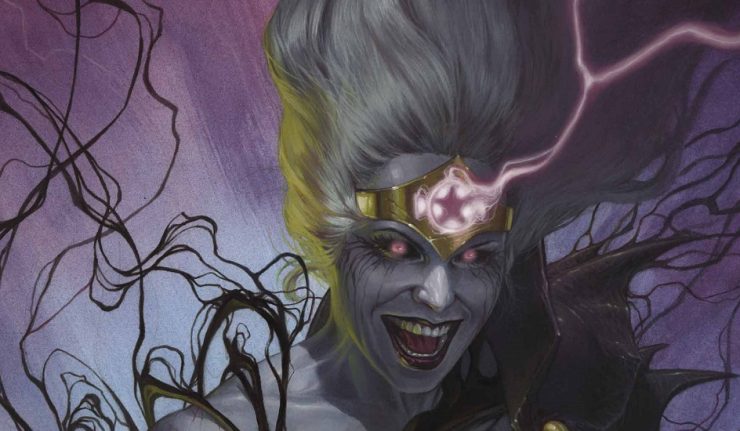 When the source wall was broken, Brainiac assigned Wonder Woman to the team of magic users looking after the Tree of Wonder but she didn’t know why.  Since then, magic has gone haywire in the multiverse and the masters of magic in the multiverse have decided that humanity has been abusing their power, and that it is time to take the magic back.

Wonder Woman has been combating this with the Justice League Dark, but she has also been having visions of an occult ritual practiced by Themyscarian witches when she was a child that lead to Wonder Woman’s branding by Hecate, the triple goddess of magic.  Now, after using her once dormant magical power lying within the branding on her forehead, Hecate has risen once again.

Wonder Woman reviewer Sean Blumenshine and I did this review together and were largely on the same page:  This crossover is awesome!  Tynion combines the best of both titles by giving readers the larger than life magical threats that only the Justice League Dark can handle combined with a deep dive into an untold part of Wonder Woman’s origin, and both are done extremely well.  One does not need to have read either title to feel included in this crossover.

On the Wonder Woman side, this is a great new addition and exploration of her childhood.  Its interesting to see the Themyscarians as a less than perfect society, and the witches and the way Hippolyta has to fight for her daughter really do a great job of showcasing that. On the Justice League Dark side, the stakes could not be higher, and it could not be more exciting.  Have you ever finished a comic and thought, “Wow, the Earth is really screwed this time?”  That is exactly the feeling you get when reading this issue.  Zatanna can’t use magic, the Justice League is in a trance and can’t be of any help, and the Oblivion Bar is all but destroyed.

The art team of Jesus Merino, Romulo Fajardo Jr., and Dave Sharpe is absolutely phenomenal.  They are somehow able to make this issue its own, unique visual story, and yet it fits perfectly into the visual storytelling orchestrated in the previous three issues of Justice League Dark under Alvaro Martínez Bueno, Raul Fernandez, and Brad Anderson.  The visuals capture a multitude of diverse locations, such as the forests of Themyscaria, the Hall of Justice, the Oblivion Bar, and the cosmic mindscape of the Justice League.

There are only a couple of minor issues that we had with the first part of this crossover.  Wonder Woman lying, or even omitting the truth from the Justice League seems extremely out of character.  As the embodiment of the Lasso of Truth, this appears to be a major transgression, and despite being unsure of what is going on around her right now, we didn’t see Diana as someone who would resort to lying.  In addition, while the narration at the beginning does a great job of depicting this part of Wonder Woman’s childhood almost like a scary story or folk tale, the narration feels a bit forced later on at the Oblivion Bar. The scene is occurring in the present, so it doesn’t really have to be narrated at all, but rather depicted in real time.  It was a choice that left me a bit confused in the middle of the story.

Done with the first chapter and ready for more! This crossover has Sean and I on the edge of our seats, but luckily, we do not have to wait long because issues are coming out weekly! I can’t wait to read Sean’s take on part two coming in Wonder Woman #56 in seven days to comic shops near you! 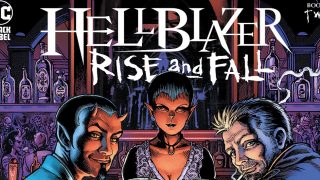 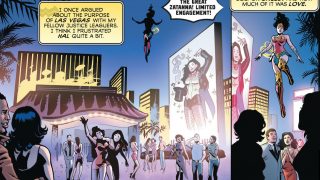